15% of Internet Users are Mobile-Only

From 2017, GlobalWebIndex is pleased to announce that it will be expanding its Core surveying program to include mobile respondents in 40 countries. In preparation for this, we’ve interviewed 85,000 internet users across mobiles, PCs, laptops and tablets to understand more about their devices and online behaviors.

In terms of ownership and usage, the vast majority of online adults today are Multi-Device Users – moving between screens throughout the day. This trend is strongest in mature markets, with the UK topping the table on 92%. Spain, the US, Germany and Sweden then follow closely behind to make up the rest of the top five countries with the highest proportions of Multi-Device Users. That PCs/laptops were particularly integral to the development of the internet in markets of this nature is a key reason behind this.

At the other end of the spectrum, 15% of online adults are using the internet via no other device than a mobile. These Mobile-Only users are most common in fast-growth markets, which occupy 13 of the top 15 places (Singapore and South Korea being the only exceptions). That’s a direct result of mobiles having been more fundamental to the internet’s evolution in these places, and that these devices have allowed some people to come online who might otherwise have lacked the necessary resource or infrastructure.

Stay tuned to the rest of this week’s Charts of the Day for further insights from our Mobile Pilot. In the meantime, clients can download our new infographic on the subject here. 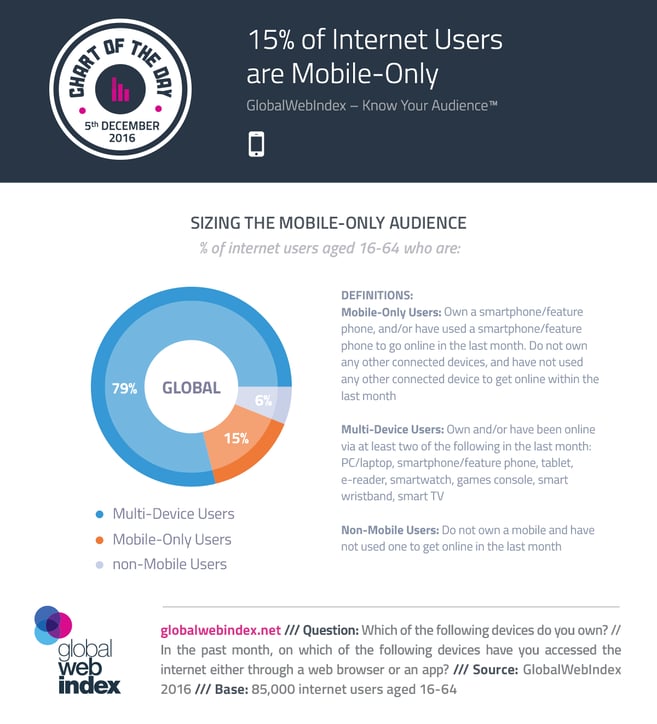