This week sees the launch of 15 for 15 – our end-of-year report which summarizes the most important digital stories from 2014 and outlines the 15 biggest trends to watch over the next 12 months.

To mark its release, our posts this week will be previewing five of its most important trends – beginning with Multi-Networking.

By 2014, an impressive 92% of internet users aged 16-64 said that they had an account on at least one of the 40 distinct social networks tracked by GlobalWebIndex. People don’t just limit themselves to one platform, though; on average, online adults now have accounts on 5.07 networks (rising to 5.9 among 16-24s).

What’s more, our research shows that – outside of China – nearly 50% of internet users are members of both Facebook and Twitter. Close to 40% in fact have accounts on all of the “Big 3” (Facebook, Twitter and Google+).

Looking at behaviors among Facebook’s active users is perhaps the best way to illustrate this phenomenon: more than two thirds are on YouTube and Google+, 6 in 10 are members of Twitter and more than 3 in 10 are on LinkedIn or Instagram.

Clearly, then, understanding the consumer’s increasingly multi-network approach to the social space is now every bit as important as responding to the multi-device nature of how they are getting online in the first place.

Watch out for the full version of the 15 for 15 report, coming tomorrow. 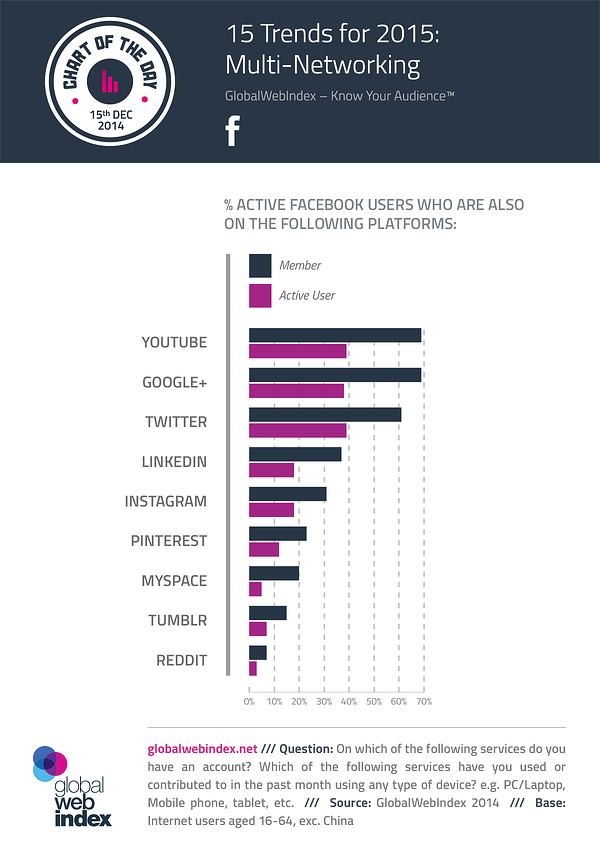