For our final chart of the day this week, we outline another of the trends featured in our 15 for 15 report (which can be downloaded here).

With 2014 marking the 10th anniversary of Google’s IPO, it’s hard to deny the ubiquity that the search portal has in the daily lives of digital consumers; of the 150 or so web brands tracked by GlobalWebIndex, Google is the one with by far the best reach. Indeed, that 85% of adult internet users are visiting the site in some form each month is a remarkable achievement.

Nevertheless, Google’s current dominance on the web is a partial result of PCs and laptops being so fundamental to the way that the internet developed. And while these devices aren’t going anywhere – with multi-device internet usage being the standard approach adopted by most users – it’s clear that mobiles are playing an increasingly important role as internet access points (with their audience increasing in size with each quarter of research that we undertake).

Analyze engagement rates by device and the differences for Google are stark: the vast majority of PC and laptop users are visiting Google on a monthly basis, whereas the equivalent figure among mobile internet users is just 50%. And even on tablets, where the experience is closer to a PC, it’s only 57% who are visiting Google.

Of course, most web brands would pay a handsome premium to have a 50% reach among mobile internet users. But that there is such a gap between the brand’s usage on different devices is a clear sign of the fundamental changes to web behaviors that the rise of the mobile internet is causing.

We find more evidence for this evolution if we look at the sources people say they use to investigate products and services on the internet. Despite search engines being in first place – at just over 50% – it’s the sheer diversity of sources that people now use which is the most striking trend here. Break these figures down by age and some particularly interesting trends emerge. Among teens – defined here as 16-19s – usage of search engines is absolutely in line with the average. Yet look at the places where the youngest internet users over-index the most and it’s mobiles that come top of the list: teens are 30% more likely than average to be using apps as a research channel. They’re also ahead on other “newer” sources of discovery such as video/content sites, micro-blogs and pinboards.

Certainly, the scale and speed of changes in behavior should not be over-estimated. But that this is one further area where mobiles are having a transformative effect seems clear. 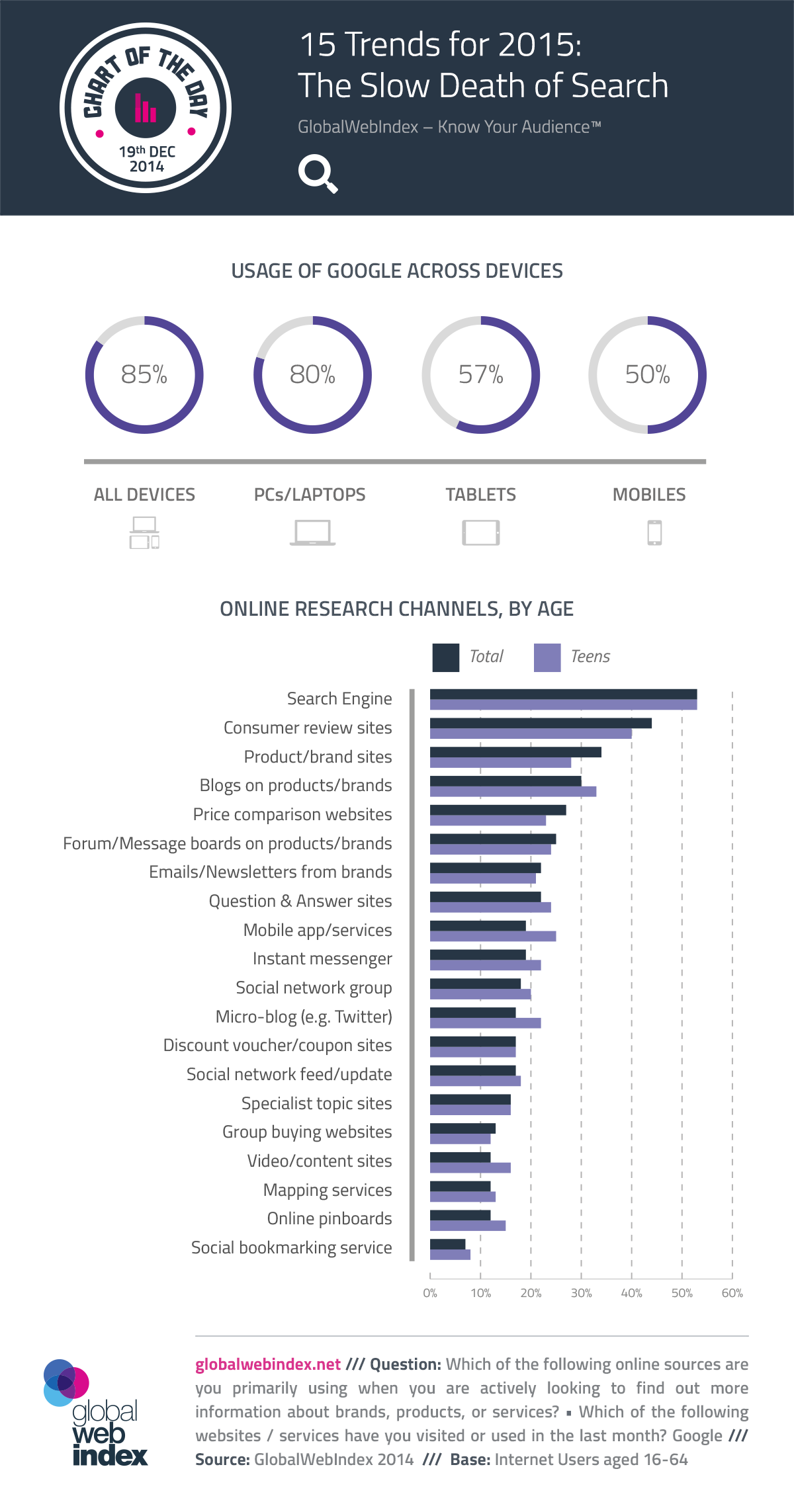