Last week was a pretty busy one for mobile: global smartphone shipments returned to growth, Samsung announced impressive earnings with its Galaxy S7 sales, and Apple announced its billionth iPhone sale. For this week’s first Chart of the Day, we thus take a look at how many people say they would consider buying a Samsung phone vs an iPhone.

iPhone sales may have dropped for a second consecutive quarter, but Apple still has a lot to shout about here – 4 in 10 16-24s say they would consider purchasing an iPhone, a figure which then drops in line with age. In part, this popularity among younger users is a result of the strong premium attached to the iPhone among the predominantly young and affluent online populations of APAC and LatAm. Tellingly, it also posts particularly good figures among the top income quartile.

Samsung’s wide range of handsets has helped it to win favor among older audiences, helping to explain why it maintains a small lead in Europe and North America. But even though it then trails its rival in most other groups, it’s important to remember this is purchase consideration rather than current ownership. On the latter metric, it’s Samsung which wins – reflecting the reality that the iPhone might remain an attractive proposition, but when financial considerations take over at the point of purchase it’s the more affordable Samsung handsets that people tend to favor. 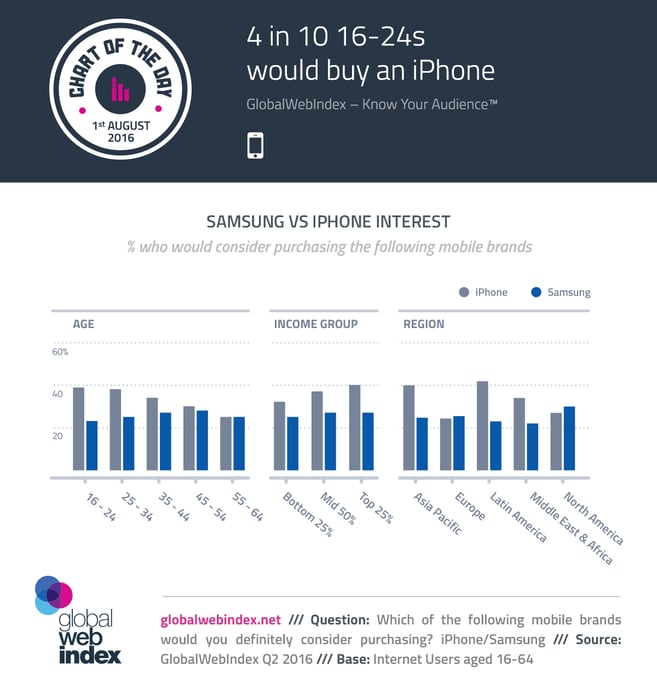