Recent reports by TechInAsia have revealed that Windows Phone devices are more popular than Apple’s iPhone in India. What the report didn’t say is that there are lots of other markets in the region where Windows Phone is equal to or surpassing iOS in terms of popularity.

Our latest data, however, shows that Windows has equalled Apple in Brazil and overtaken them in key emerging markets: Argentina, India and Poland.

These are all countries where low cost smartphones running Windows Phone, are much more attractive to the up and coming middle classes compared to the iPhone. 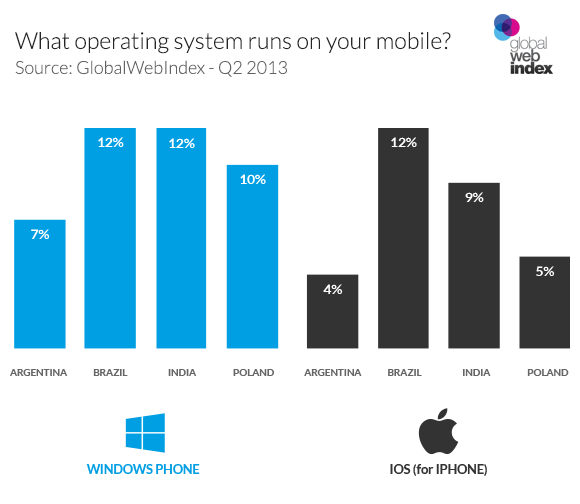 While Apple does sell older iPhones at discounted prices, they are still at the top-end of the smartphone market in many of these countries, and the majority of the smartphone users opt for lower cost Android and Windows Phone devices.

Another factor that is contributing to Windows Phone’s relative success in other markets is the continuing strength of the Nokia brand. While Nokia has suffered heavily in the US and Western Europe, it still retains a large user base in emerging markets. Now that it has a cheap smartphone offering running the Windows Phone OS, it has the opportunity to leverage its legacy brand strength in emerging markets in a way that it was not positioned to do three or four years ago.

When we look at Argentina, Brazil, India and Poland, Nokia has a very strong legacy. It’s the second most popular handset brand by ownership in the first three markets and the most popular in Poland. 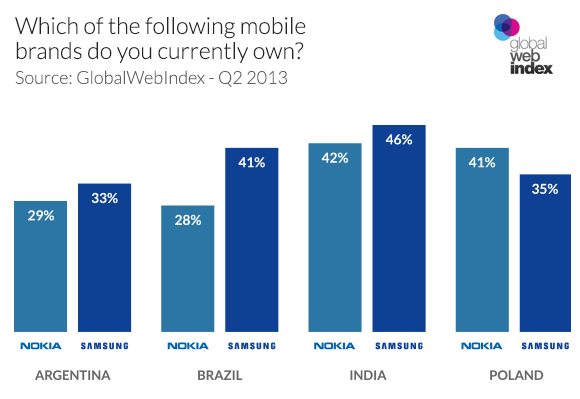 In India, for example, it was recently named winner of the India’s annual Brand Trust Report for the third year in a row. Additionally in Poland and Argentina, the iPhone is not the most sought after handset as people often assume. That honour, in fact, belongs to Samsung with Nokia coming in a close second. 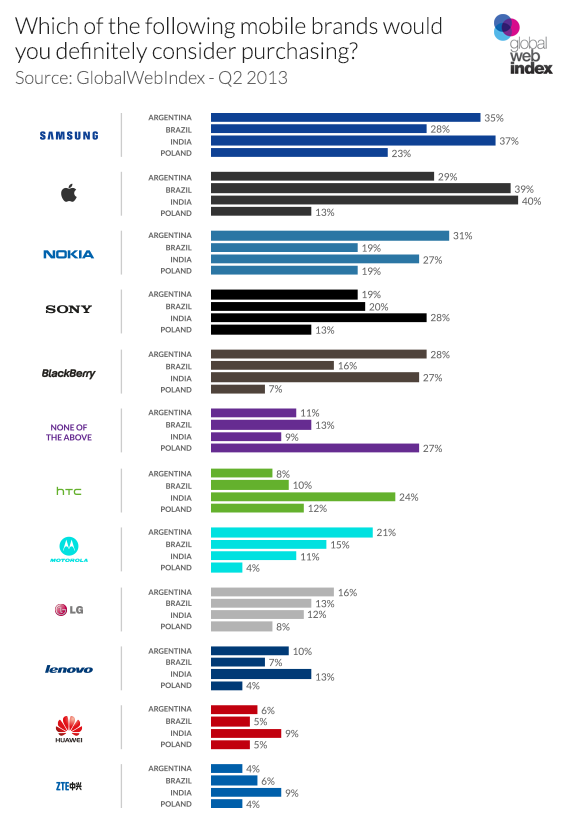 So what can we deduce about the future of Windows Phone (and therefore Nokia).

Firstly, Nokia is not dead and buried. It still has a strong brand in many emerging markets as well as sizeable market share in a few key ones. Secondly, there is an opportunity for Windows Phone in developing markets, where millions may desire an iPhone but can’t afford one. This, however, will require Microsoft to compete on price and is something it will struggle to do while maintaining the operating margins that its investors will expect due to heavy competition at the low end of the smartphone market. Furthermore, the launch of the iPhone 5c, while still a premium priced smartphone, does bring the iPhone within tantalizing reach of millions of emerging middle class consumers around the world. Moving forward, Microsoft must use its popularity in emerging markets to build a solid Windows Phone user base while using that opportunity to build Windows Phone into a true Android / iOS alternative that can compete at the high end of the smartphone market as well.