4 Things to Know About VPN Users

Around the world, millions of internet users are deploying Virtual Private Networks (VPNs) or Proxy Servers to get online – tools which are allowing people to bypass traditional connections and tracking methods to use the internet via a remotely located server.

Here we outline 4 important things you need to know about those who are accessing the internet via the ‘back door’.

1. One Quarter of Online Adults Have Used a VPN

Despite VPN usage often being considered a pretty niche activity, our latest research shows that it has already hit the mainstream – almost a quarter of internet users say they have used a VPN or Proxy Server to access the internet. 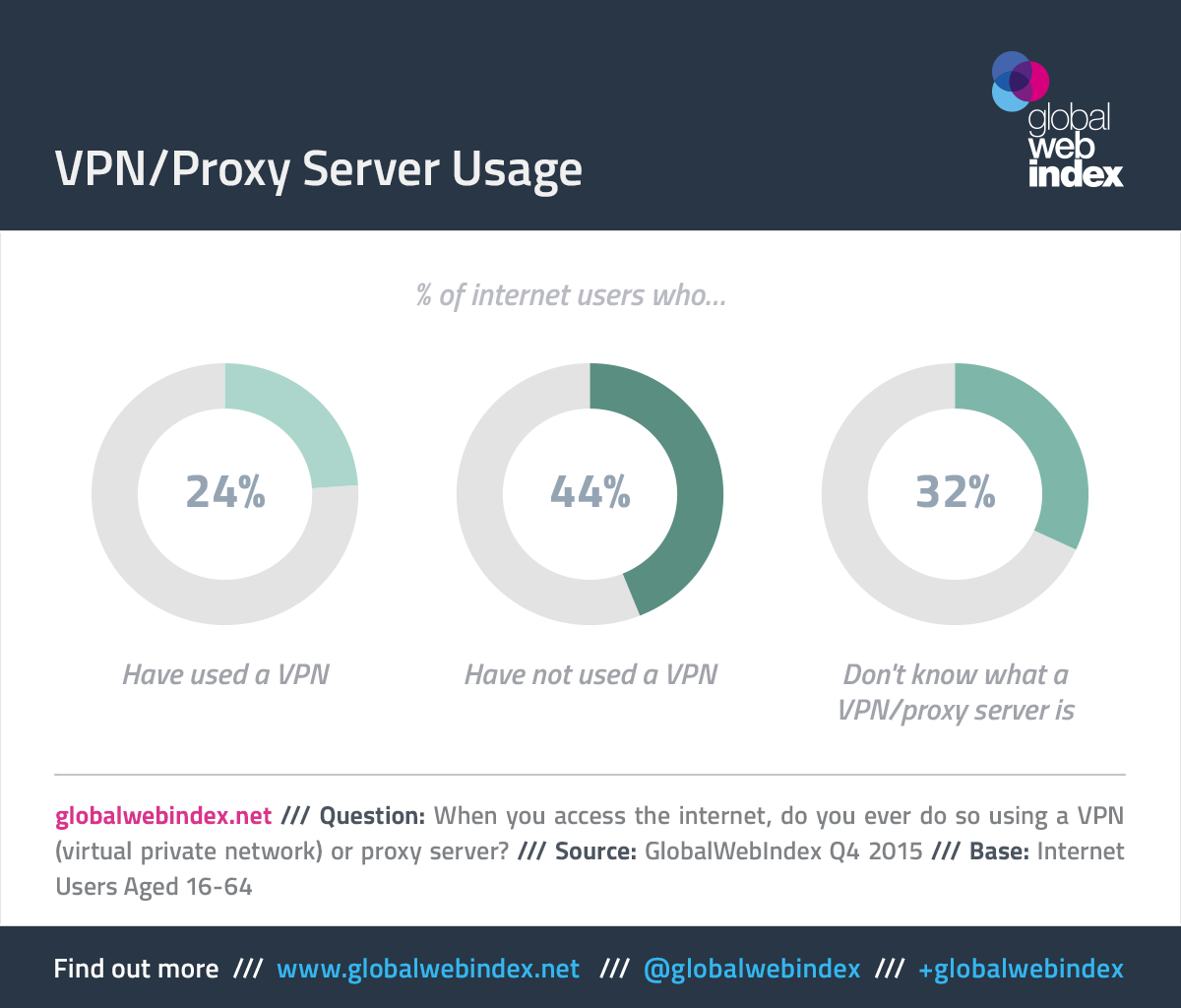 Look at the top 10 countries for VPN usage and it’s abundantly clear this is a trend for the fast-growth nations. Indonesia, Thailand, Brazil and Saudi Arabia are the countries where internet users are most likely to be using them – around 4 in 10 do so here, representing a significant overall audience size. Although China may be beyond the top 10 list, there’s still 28% of online adults who are employing VPNs here, and in terms of raw size, this country represents a considerable proportion of global VPN users.

This geographical pattern has major implications for audience measurement. VPN users are highly likely to be incorrectly geo-located by passive analytics, which can seriously skew website traffic measurement. Some visitors recorded as coming from the most established markets like the US actually represent users in fast-growth nations. 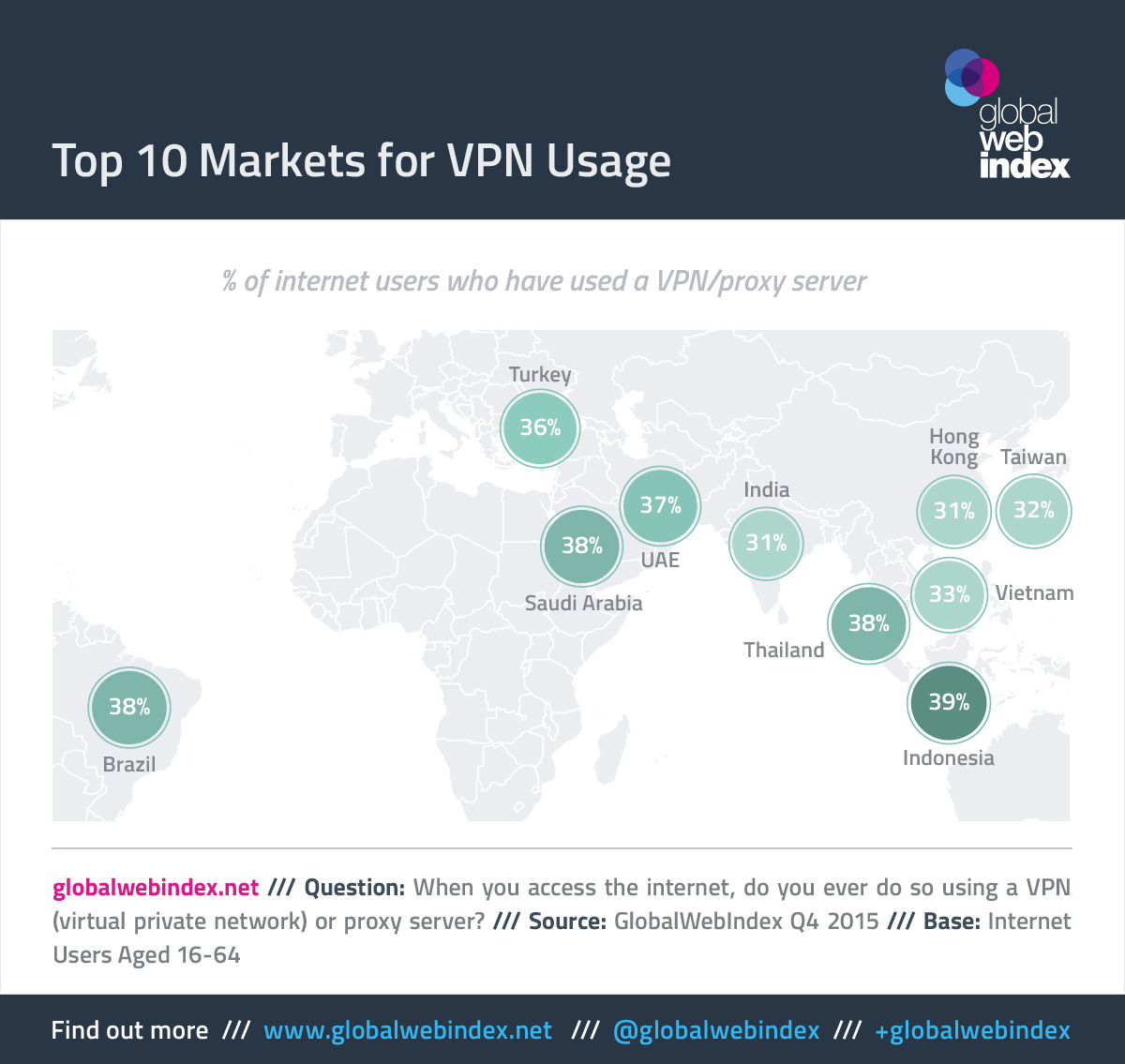 3. Privacy and Content Are Driving VPN UsageVPNs are often considered important tools for securing internet freedom, with citizens using these tools to challenge attempts by governments to track or restrict their online activities. Almost a third of VPN users are using them to keep their anonymity while browsing online.

Also highly important is the numbers using VPNs to access better entertainment content (30%). Using a VPN/Proxy Server allows internet users to access other versions of content sites they use anyway – like the US Netflix content store, or the UK Apple store – or to gain access to media services which or not yet officially available in their country. Before Netflix announced its expansion into almost every country, our research found that many internet users outside its official markets were already using the service each month. 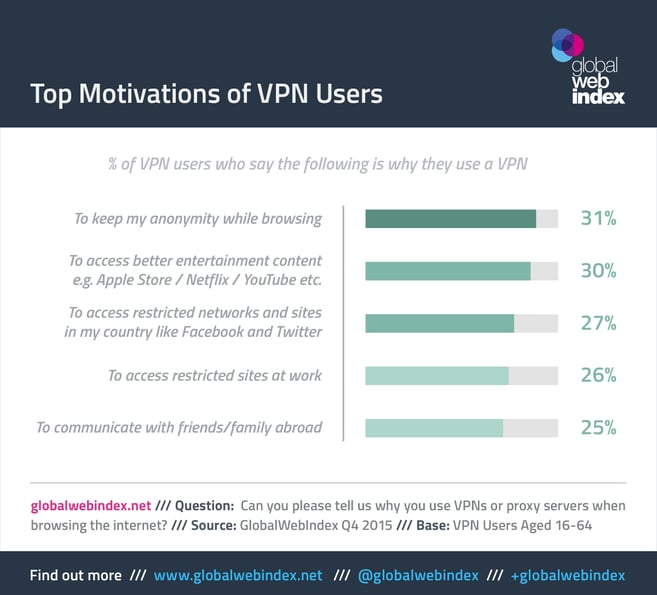 4. Most are Deploying VPNs Regularly

Turning our attention to the frequency of VPN usage, it’s 1 in 4 VPN users who are deploying these on a daily or near-daily basis, and a considerable 70% using them at least once a week. Clearly, using a VPN has become an ingrained and crucial part of getting online for many of these VPN users. What’s more, as these tools become more accessible and awareness grows, they are likely to play an ever-more important role in many internet users’ online experiences. 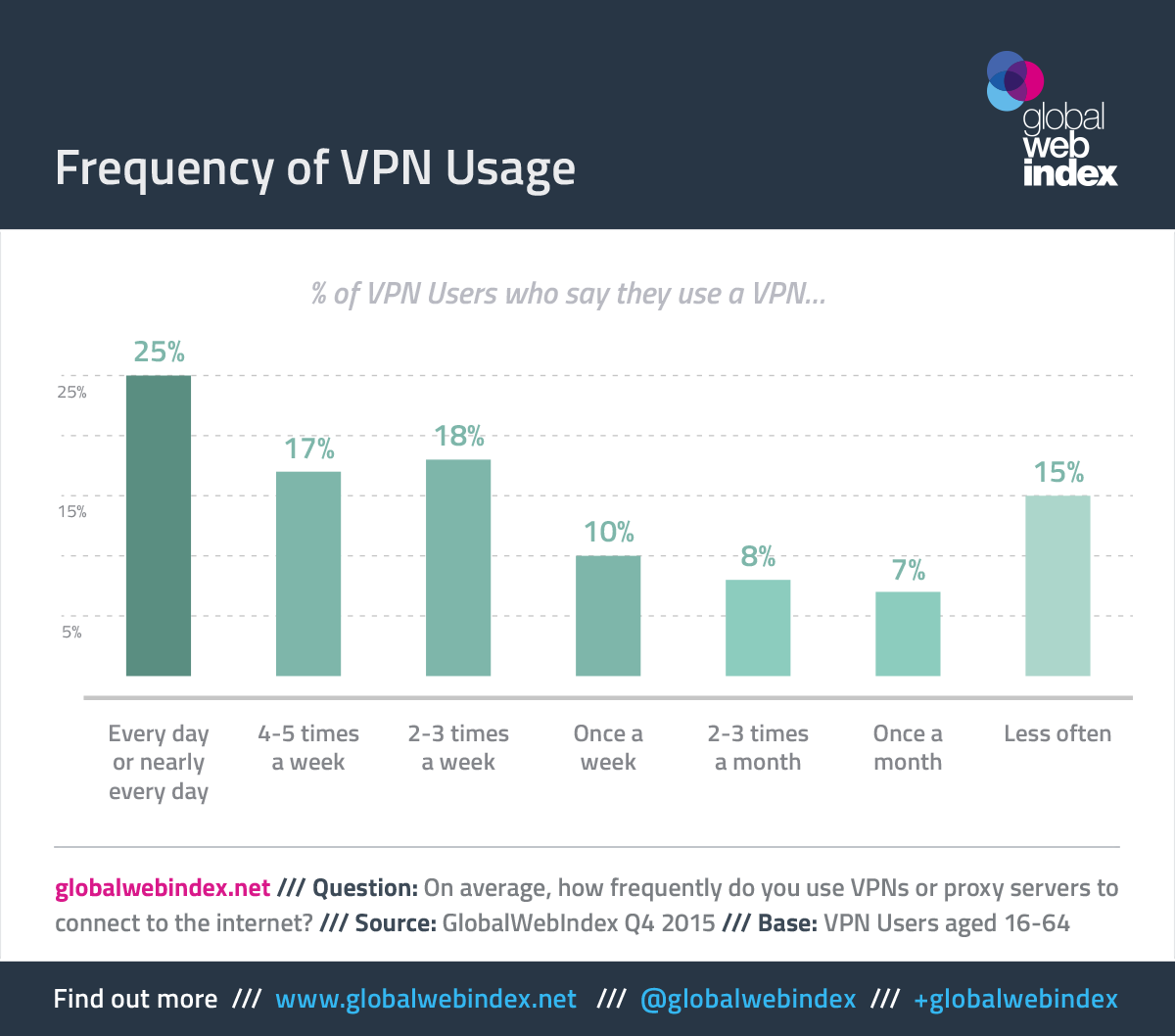