In our new report, The Missing Billion, we demonstrate how the size of online populations in fast-growth markets is often being dramatically under-estimated by passive analytics.

A key part of this is the popularity of Virtual Private Networks (VPNs) and Proxy Servers – tools which allow people to connect to the internet via third-party servers which are typically located in a different country.

Although still seen as a pretty niche behavior, our latest research shows that the real picture is quite different: VPN usage is already widespread, with 28% of global internet users aged 16-64 saying that they have deployed one when using the internet. That equates to a staggering 420 million people across GWI’s 32 markets.

If we analyze this at a country level, it’s clear why this trend is causing millions to become invisible: VPN usage is most pronounced in fast-growth nations. Indonesia is the country in which people are the most likely of all to be using them (42%) but, in terms of overall audience size, the importance of China is obvious: the 36% of its online population who report having used a VPN represent some 166 million people.

In contrast, usage is considerably less common in the most mature internet markets – with the USA, Canada, France, the UK, Australia and Japan recording the lowest figures of all.

All this has major implications for audience measurement, with many VPN users being incorrectly recorded as being in the most established markets like the US (where the greatest numbers of servers are located). 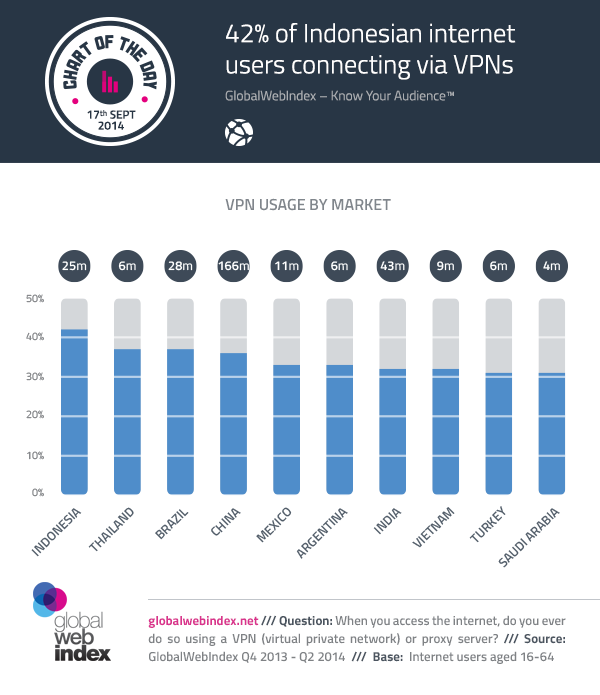