55% of UK & US iPhone users interested in wearable tech

With the Apple Watch finally having graduated from rumor to reality, today’s chart takes a look at American and British attitudes towards wearable tech.

Overall, 45% of US and UK internet users aged 16-64 say that they have used wearable tech already (defined here a smart watch, smart wristband or Google Glass), or are interested in doing so in the future. Among iPhone and Android users, though, this passes the halfway mark to hit 55% and 58% respectively.

That the figures are so close between users of both phones gives some indication as to why Apple is not bothered about being (relatively) late to enter the smart watch market: as the company pointed out, it has a proven track record of making a delayed entrance but then establishing itself as a highly influential player. It’s certainly telling that Android smart watches have been around for some time now and yet Android users are only 5% more likely to have used a smart watch than their iOS counterparts.

From a demographic perspective, there are some obvious and predictable peaks in interest. Across the UK and US, men (51%) lead women (38%) while 16-34s are notably ahead of those in the older age brackets. Interestingly, though, differences by income level are anything but pronounced; the Apple Watch will thus enter a market in which consumers from all income groups are potential customers 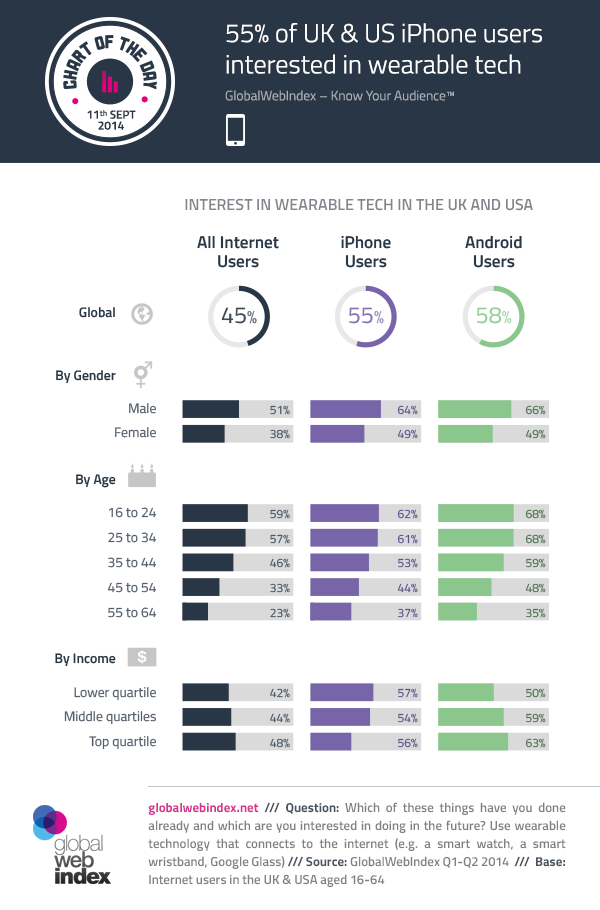