84% of Facebook visitors are from outside of the US

In our new report, The Missing Billion, we explore how internet audiences in fast-growth markets have typically become under-represented – or completely invisible – inside passively collected datasets.

A number of factors are contributing to this, including widespread VPN usage, high levels of device sharing and the automatic re-routing of internet traffic through some of the most developed markets. But the assumption that the US is still the global powerhouse of internet usage is another factor, here. Although it is still a major force, we have to recognize that the American internet population now represents less than 10% of the global total (compared to a staggering 81% in 1995).

This shift is reflected in GWI’s audience breakdowns for various social platforms and key web behaviors during 2014. In each case, it’s strikingly clear that American users now represent only a minority of the total audience; some 84% of Facebook active users are non-US, for example, as are 87% of Twitter’s and 99% of those on WeChat. Similarly, 90% of people who watch TV on-demand each month are located outside of America.

This is a clear challenge to passive analytics figures which often continue to show American users accounting for the biggest segment of a website’s traffic. Quite simply, audiences are in many cases far more diverse and geographically distributed than such figures would suggest – a theme we explore in much more detail inside the report. 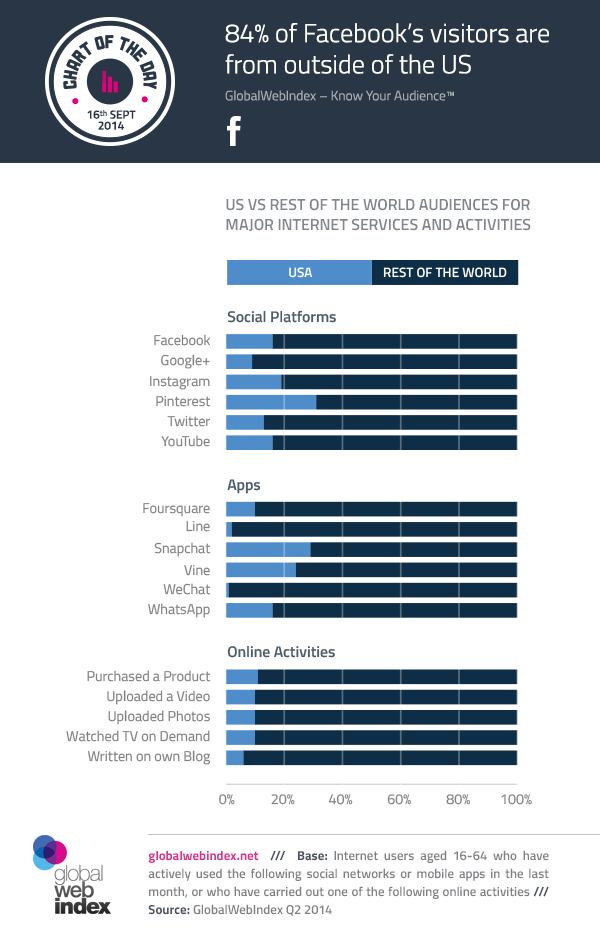