APAC and LatAm most likely to get content via VPNs

With crackdowns against VPN usage continuing to make headlines, Tuesday’s Chart of the Day takes a look at those regions/countries where people are most likely to turn to these tools in order to access better entertainment content.

From a regional perspective, it’s LatAm, APAC and the Middle East where this trend is most pronounced. In each place, about 15% of internet users say they’ve obtained better entertainment content by connecting to the web via a VPN or Proxy Server. At a country level, Indonesia is the world leader, although a number of other markets follow very closely behind.

Multiple reasons are contributing to this. In Asia and MENA, several of the most popular services like Netflix have barely any presence at all. In contrast, many LatAm users might have their own national versions but are nevertheless looking to access US services in order to take advantage of superior content libraries.

Particularly telling is just how far behind the figures are for Europe and North America. Although the older age profiles of internet populations in these regions is contributing to this, it’s also because these regions typically have the widest ranges of content available to them. In short, North American and European users have less need to bypass geo-restrictions to find better content as they are already spoilt for choice.

With VPN users ahead of average when it comes to paying for digital content, this is a clear case of supply not meeting current demand. 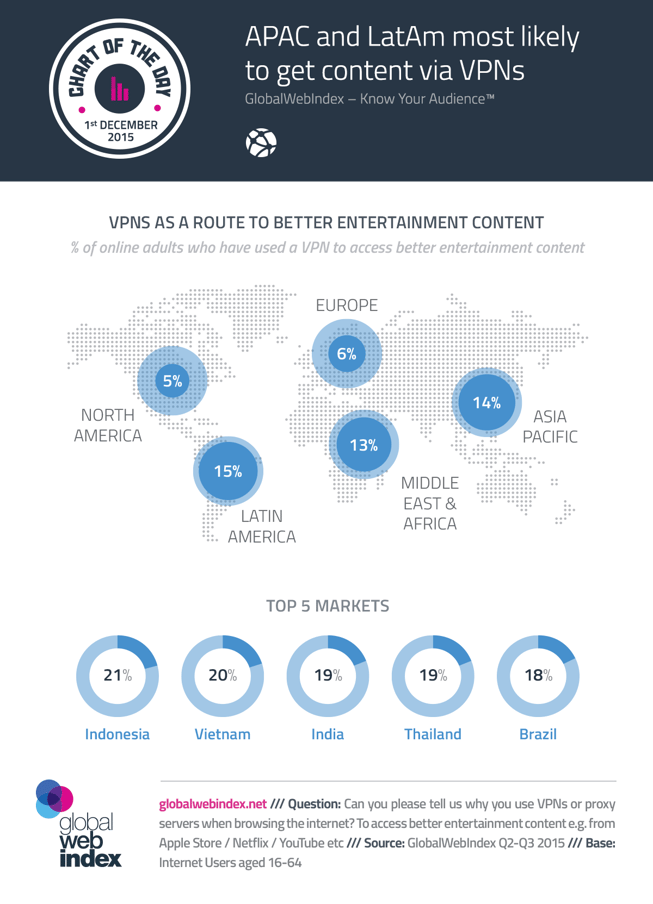