It’s been heavily rumoured that Apple will be rolling out a lower cost handset later in 2013. To Apple purists, this may seem like a sell out. On the contrary, our latest data in the Q1 Stream Device Report explains why this must happen.

As the GlobalWebIndex Stream Device Report – Q1 2013 revealed, Android increasingly dominates the smartphone market. An incredible 60% of mobile Internet users now use the OS, compared to 24% in Q2 2011.

This demonstrates monumental growth that drives our forecast of 80% of mobile Internet users in 2016. In contrast, Apple has a static (and potentially declining) share, which peaked at 17% in Q2 2012 and has since shrunk to 16%. With Windows, Symbian and BlackBerry failing to collectively drive share, Android is left with total dominance. 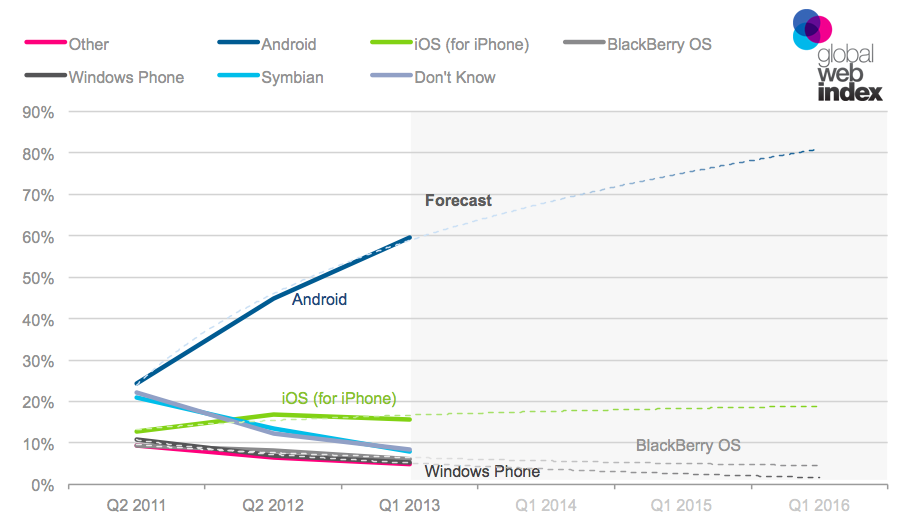 Equally concerning is iOS’ poor performance in growth markets like Brazil, India and Indonesia; in comparison to the US, iOS share in emerging markets is marginal.

It has been recently quoted that despite declining market share, Apple makes its majority of profits in the mobile market (57% V 43% Samsung, with all other players losing money according to Cannacord Genuity). Purists say this is due to the high margin device and low cost established supply chain, plus a highly developed application and content ecosystem.

It should also be noted that Apple already offers older iPhone models at much cheaper prices than the latest models – a new iPhone 4 costs £319 from Apple and is free on most contracts. And stampedes in China to get the latest device – alongside a consumer base that spends the most on mobile apps and content – give no reason to the naked eye why Apple would lower their premium image.

But if Apple does not address this growing Android dominance, its profits will suffer for several reasons:

For these reasons and then some, an accessible handset is needed to arrest the decline in iOS market by courting a diverse user base. Whether that base ought to be less tech savvy users or those in fast growing markets like India is secondary to the need for mass-market adoption.

The iPad Mini was no ground-breaking invention, but it was a sensible business decision based on maintaining high share and creating profitable products off of current technology. They’ve already innovated; now, they should shore up their market share.

Alternatively, iOS could open up to other manufacturers – but as we know from Apple’s history, that likelihood is slim to none.