Apple’s Q2 results provide further confirmation of trends we’ve been tracking at GlobalWebIndex throughout 2014: while our love affair with the smartphone continues, it’s no longer burning quite so brightly for the tablet.

The 12% profit growth reported by Apple came largely from buoyant sales of its iPhone; in contrast, tablets slid for the second consecutive quarter. This is a direct reflection of how people are using devices to access the internet. According to GWI’s latest Q2 data, it’s now 69% of global internet users aged 16-64 who are going online via mobiles – a figure which represents more than a billion people across GWI’s 32 countries. The tablet, meanwhile, is still somewhat less mainstream on 33% – despite a range of low-cost tablet devices having been available for some time now.

The clearest picture of what’s happening on the ground comes through examining what people are doing on their devices. Across the 35 or so online activities monitored by GWI – covering everything from social networking and buying online to watching TV on demand and streaming music – most are trending upwards on mobiles. Put simply, a higher and higher proportion of smartphone owners are doing them each quarter. For tablets, though, we’re typically seeing the opposite trend at work: almost all percentages are trending downwards, albeit gently, with many users struggling to decide just what they should be using their tablet for. We still like the idea of tablets, we’re just not sure what to do with them. This is an obvious concern for the iPad, especially as drops in tablet usage are most pronounced among the top income quartile – the group most likely of all to be using iPads rather than tablets from competitor brands.

Later this year, Apple is heavily rumored to be releasing two new iPhone models which feature much larger screens than any of their predecessors. The biggest of these – expected to carry a screen some 5.5 inches in size – places it firmly in the “phablet” territory. This is exactly where the company needs to be heading, with the rise of “phablets” – especially those available from Samsung – having had a serious impact on the iPad’s appeal and relevance. While tablets are still restricted to in-home or at-work use for most, “phablets” combine the usability of the iPad’s larger screen with the portability of a smartphone.

Apple won’t necessarily find it easy though. Yes, its devices still enjoy greater levels of usage among wealthier demographics and in some of the most digitally developed markets (with the US, Australia, Canada and Singapore topping the list for iPhone usage in Q2 2014). But with Apple arriving at the “phablet” party a long time after some of its rivals, and with its device likely to be much more expensive than many of the others available, it will need to work hard to win back some of market share captured by Samsung in particular over recent years.

In its Q2 results, Apple was keen to emphasize growing demand across the BRIC markets. But take a look at iOS vs Android at a country-by-country level and it’s clear that the gaps between the two operating systems are now huge. Globally, in fact, Android has nearly trebled its share since summer 2011 (hitting 69%), whereas iOS has risen by just 6 percentage points to 19%.

Of course, Apple has never been just about the product itself – part of its appeal has always been the “experience” its brand offers. Even so, its “iPhablet” has a lot of ground to make up. 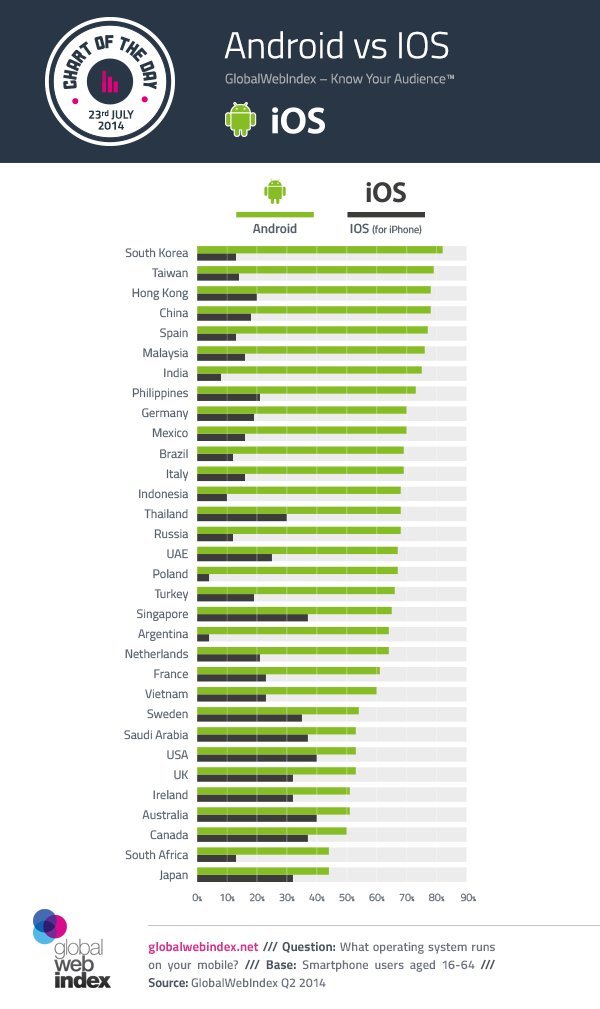