As Orkut closes, is anyone still using it?

Some ten years after its launch, this week will see the curtain fall on social networking site Orkut as it closes down permanently.

By the middle of 2014, Orkut was still just about clinging onto a position in the top 10 global social networks (outside of China). Sure, it might have been a long way behind the big players like Facebook, Twitter and Google+, but that 12% of internet users had an account on the service is still pretty significant.

So, why the decision to close it? Well, firstly, there were clear disparities between the numbers who had accounts and the numbers who were actually using the service each month. Although an impressive 49% of online Brazilians were Orkut members, for example, just 7% were actively engaging on a monthly basis.

Secondly, its coverage was extremely uneven – membership was strong in India and Brazil, average in places like the UAE and Thailand but virtually non-existent in most of the markets tracked by GWI.

Thirdly, and most importantly, Orkut had become too much of a distraction from Google+, the service in which Google has invested so heavily and which consistently scores its best usage figures in fast-growth markets. In fact, Google+ is most popular of all in India – the very same market in which Orkut had seen its best performance. So, for Google, it’s very much a case of Orkut making way in order to ensure further Google+ expansion. 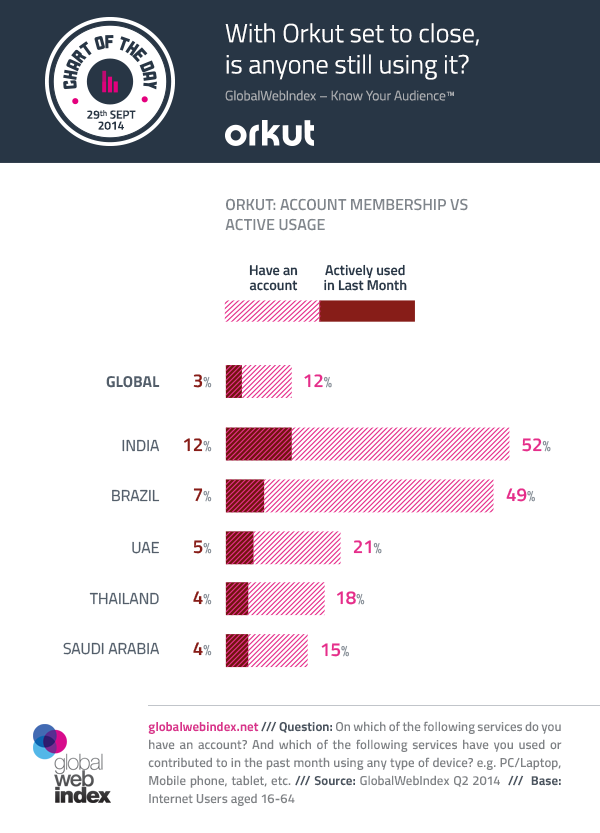