Daily Time Spent on Social Networks Rises to Over 2 Hours

As the latest social media statistics  in our reports outline, we’ve been tracking the daily time spent on various forms of social media in the last few years since 2012.

The average internet user is now on social channels such as Facebook, Twitter, Pinterest and LinkedIn, or messaging services like Snapchat and WhatsApp for over 2 hours per day. This shows the central role that social is playing in the daily lives of today’s internet users.

As the influence of social media continues to rise, we take a closer look at how this trend in increased usage and engagement rate has evolved over time. 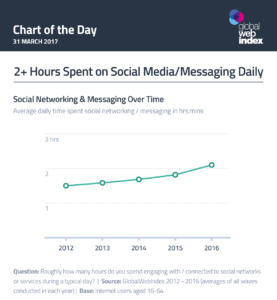 As our research shows, this is a figure that is rising with each passing year. The emergence of multi-networking is a key driver here – the average active internet user now has over twice as many social accounts as they did in 2012.

What’s strikingly clear from our data is that the internet is capturing more and more of our time each day – with total hours spent online via PCs, laptops, smartphones and tablets growing from 5 ½ hours in 2012 to 6 ½ hours online on a daily basis in 2016.

One of the drivers of this is still-increasing levels of engagement with social media sites, which are now capturing 2 hours of online time a day – half an hour longer than they were in 2012.

As a share of the time we spend online, these engagement figures mean that social networking now accounts for a third of our daily internet activities.

That’s food-for-thought given how many commentators have been willing to proclaim that social media networks will soon reach saturation point in terms of number of users.

Rather, statistics show that active users are actually spending more time on social platforms now than in the earlier part of the decade – with the rise of mobile device adoption and the mobile internet, along with the ability it affords us to connect to networks at any time and from any location, being a major driver of this. 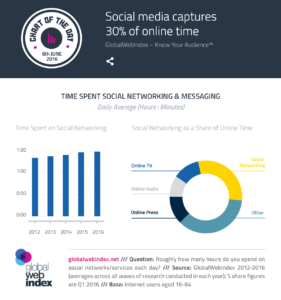