E-commerce most widespread in China, Germany and the UK

To mark the release of our new GWI Commerce report – out next week – today we focus on the numbers who are buying products online.

At a global level, 65% of internet users say that they have done this in the last month (via any device). Just as significantly, an impressive 90% report that they have bought a product online at some point in the past, underlining the truly global reach of e-commerce.

Nevertheless, regional differences are strong: over 70% of internet users in North America and Asia Pacific are monthly purchasers, compared to 44% in the Middle East and Africa.

At a national level, it’s China that leads the way – a market where the overwhelming majority (82%) of internet users are making online product purchases. To give this already impressive figure some context, that represents an estimated audience size of nearly 382 million people. No less remarkable is the fact that 35.55 million in China made their first online purchase during the last 12 months.

Certainly, e-commerce is also absolutely mainstream in some of the most mature internet markets such as Germany (78%), the UK (76%) and the US (72%). But that China is the global powerhouse for this activity is beyond doubt. 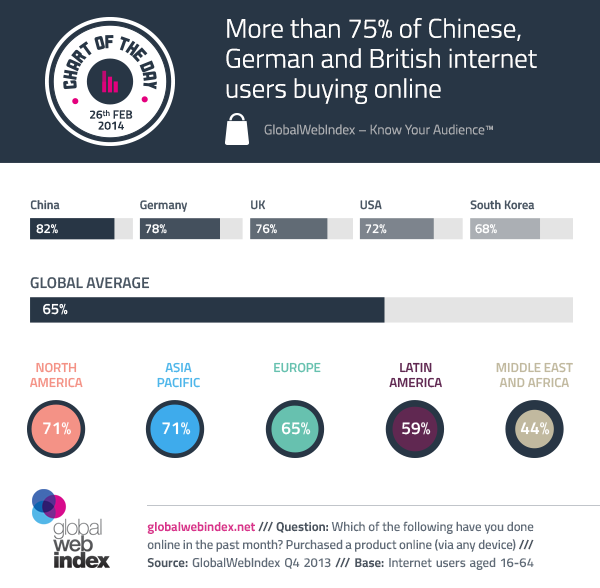