Ease, reach and cost are driving the boom in mobile messaging

Why have messaging services enjoyed such a rapid rise to prominence in recent years? Well, according to our research among WhatsApp users in the UK (download a free summary here), it’s because chat apps offer the easiest way of sharing photos and videos (68%), are being widely used by our friends and family (65%) and are cheaper than sending SMS messages (59%).

If we then turn our attention to attitudes among current SMS fans – that is, people who are currently using mobile messaging tools but who still prefer sending text messages – the future prospects for the messaging services look particularly bright. Those who still favor SMS are influenced the most by the ability to send messages without an internet connection (68%), the availability of unlimited SMS messages from their operator (68%) and the fact that not all of their friends are using mobile messaging apps.

But we have to imagine that all of these factors will be key targets for mobile IM tools: coverage will get progressively better, the offer of unlimited texts will get less relevant/impactful and the numbers of people using IM tools will increase.

Perhaps most significantly of all, just 10% of people say they don’t trust mobile chat app companies with their conversations – which would arguably have been by far the biggest barrier against IM tools taking further ground from SMS. 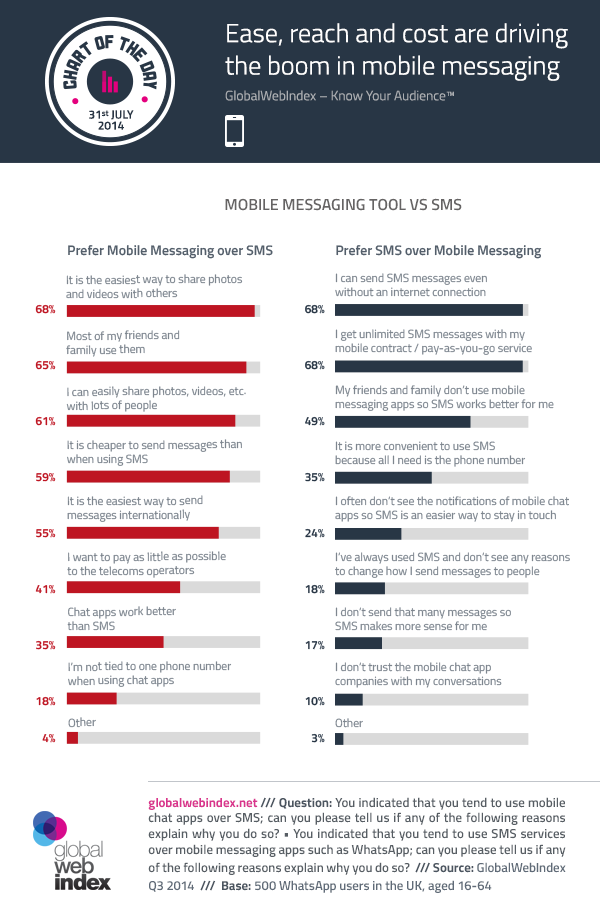