An academic from University College London, David Miller, has recently received a lot of coverage for his recent claims that Facebook “is basically dead and buried” among teens. Naturally, being researchers ourselves, we took to our own data to analyze his claims about Facebook usage among teens around the world. While teen usage of Facebook is certainly in decline, as we’ve noted before, there is strikingly little evidence to suggest that UCL’s findings of it being “dead and buried” are representative of broader trends.

While boring, especially for the mainstream media, the principle reason that these insights are not representative of current trends is because of the type of research methodology employed. Researchers working on the “Global Social Media Impact Study” employed a methodology called ethnographic research, which is a tried and tested methodology, but because it involves observing every facet of participants’ lives, this means the research must be limited to very small groups of people. While the methodology itself is certainly sound, the types of insights that we can draw from ethnographic research are limited primarily to developing theories about the behavior of the study’s participants. Conclusions, such as those claimed by Dr. Miller that Facebook is “dead and buried”, can’t possibly be drawn from such limited research in a credible way.

GlobalWebIndex, on the other hand, seeks to answer these larger questions and deliver the most accurate view of online consumer behavior. This is precisely why we conduct our quantitative research on such an unparalleled scale, with nearly 170,000 online interviews per year across 32 countries.

So, turning back to answer the question of whether or not Facebook is truly “dead and buried”, we find that 56.2% of 16 to 19 year olds globally (32 GWI markets) are using Facebook on a monthly basis. This may not sound like a lot, but it is important to put it in perspective with the other social services claimed to now be more popular among teens. Looking at things in this light, Facebook is actually the most popular social network on the planet among teens with 59% more active teen users than the nearest competitor, YouTube (35.4% of 16 to 19 year olds). Twitter is a distant third with 30.1% of 16 to 19 year olds around the world using it on a monthly basis. 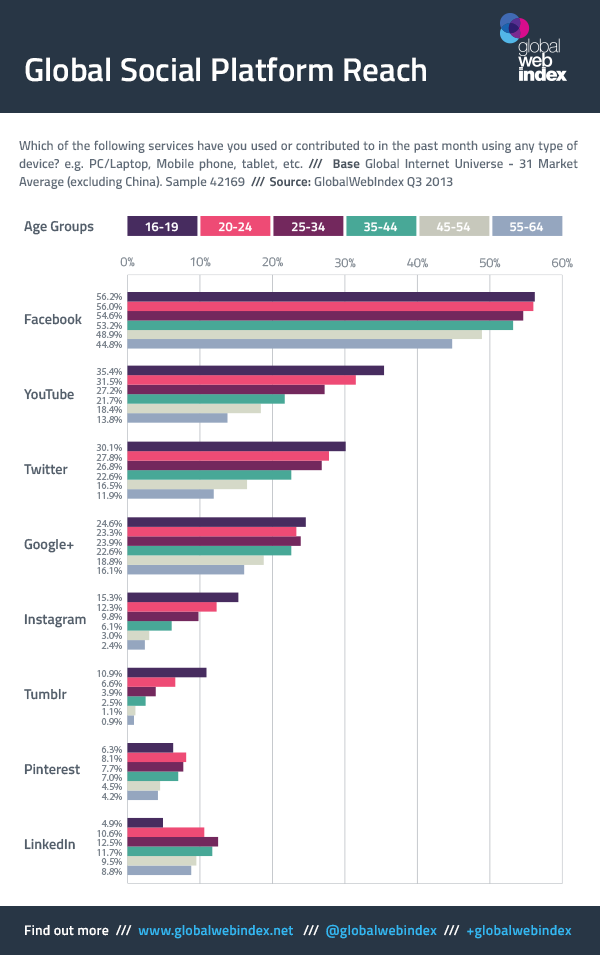 Importantly, mobile also plays a key role for teens as we’ve noted before, and this is where we feel that Dr. Miller gives us some excellent insight:

In my school research, the closest friends are connected to each other via Snapchat, WhatsApp is used to communicate with quite close friends and Twitter the wider friends. Instagram can include strangers and is used a little differently.

In the end, it is these types of ethnographic insights that help us verify the insights from GlobalWebIndex research, but the current picture is still crystal clear. Facebook dominates social media usage around the world (with the exception of China of course) even among teens. Facebook certainly has its share of challenges ahead and teens will no doubt be at the vanguard of those behavioral shifts, but to call Facebook “dead and buried” for teens is a substantial overstatement. As we look forward into 2014, Facebook will still be the online social hub it has been for a decade, but it will have to continue to innovate at a rapid scale to adapt to the increasingly mobile world.