In the final days of the World Cup, GlobalWebIndex re-surveyed members of its Real-Time Panels in the UK, USA and Brazil to understand how behaviors had evolved during the tournament and, in particular, to track how viewing habits, social media activities and sponsor recognition levels shifted between the group and knockout stages.

Here we drill down into one of these topics, analyzing which platforms were being used by social networkers at the start versus the end of the World Cup.

Overall, Facebook retained its position as the premier social network; it was being used by around 80% of the social audience in the US, UK and Brazil as the tournament drew to a close – more than twice the figure for second-placed Twitter.

Further down the list, WhatsApp rose from fifth place at the start to third by the end, having overtaken both Google+ and Instagram. But while WhatsApp was only a minor destination inside the UK and US, it enjoyed a very strong level of engagement in Brazil – indicating once again how important this purchase was for Facebook in terms of the coverage it provides in fast-growth markets.

Across the board, it’s clear that engagement levels dipped as the tournament progressed. As we’ll be exploring in our World Cup trends released this week, this is one of many areas where we saw the impact of a team being knocked out of the competition; as that happened, behaviors shifted in each of the three countries surveyed. In this instance, it dampened enthusiasm levels for posting on social networks – hardly surprising given that goals were one of the most popular talking points for members of our Real-Time Panels. 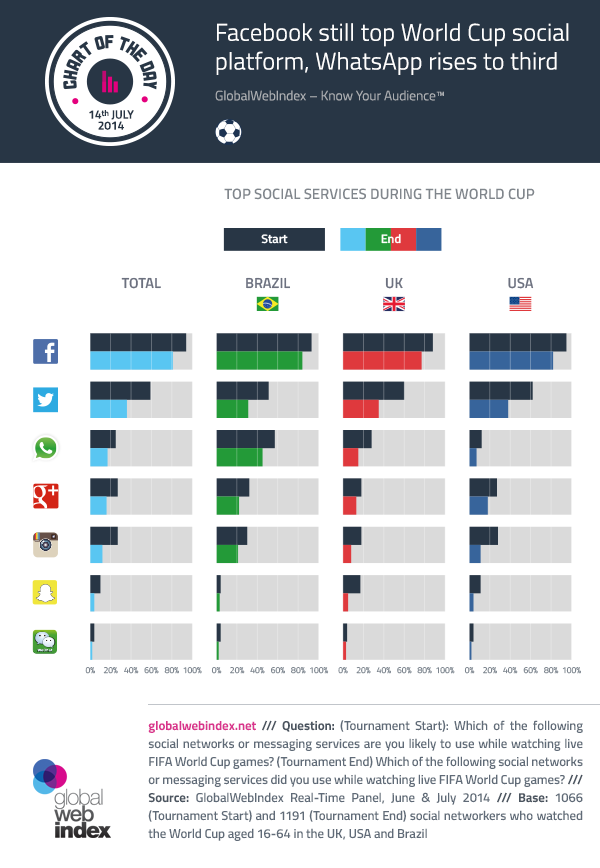