Google Glass remains something of an enigma. Sure, most of us have read about it and seen videos of it in action. But very few of us have actually worn a pair; essentially, it’s the idea of Google Glass that has shaped most of our views to date, not the reality.

With little or no hands-on experience of Google Glass, it’s easy to subscribe to the view that the device is the White Elephant of the wearable tech world. But its current rarity is also its biggest trump card: attempt to find anyone with an interest in tech who isn’t at least a bit keen to try a pair out for themselves and you’ll have a long old search. 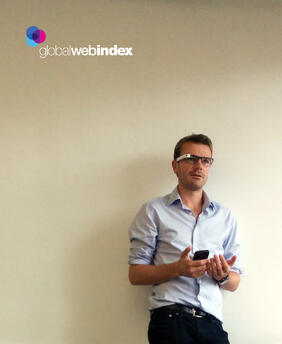 So, leaving all preconceptions and Glasshole references at the door, GlobalWebIndex has spent some time playing with wearable tech’s most famous creation to give a view on that most crucial of questions: will people continue to use Google Glass once the initial novelty fades?

Now, Google has been pretty clear that the Explorer Edition currently available to purchase in the US and UK markets is very much a beta work-in-progress; the device is still at the beginning of its journey and Google is keen for initial users to help shape its future. But with a price-tag of $1500/£1000, Explorers are (rightly) going to expect to get a lot for their money. And herein lies the major problem for Google Glass in its current iteration: the Explorer Edition comes with some fairly chaotic juxtapositions. It’s a device where possibility meets frustration, where neat features sit side-by-side with rather irksome ones, and where the user experience veers between the cool and the slightly awkward. It is fun, but it’s not yet useful enough.

Let’s start with some positives. Firstly, it’s nowhere near as cumbersome, clunky or unstylish as sometimes stated. Quite the opposite, in fact: it’s pretty light and comfortable, it’s not too intrusive on your vision and you become used to wearing it remarkably soon after putting it on. And while it will need a lot of changes before it’s anything approaching a discreet device – no-one is going to miss the fact that you’re wearing it in its current version, that’s for sure – it does have a certain elegance and simplicity (something which is equally true for the unboxing experience: retrieving Google Glass from its packaging for the first time is pretty satisfying). It’s also worth noting that virtually every wearable tech producer out there has been bringing big-name designers in-house, a clear sign that the aesthetics of wearable devices are going to get better and better.

In terms of capabilities and features, even the most skeptical of users out there would be hard-pressed to deny that some are them are pretty useful. While not perfect – especially outside – the voice recognition works better than several other comparable systems, particularly for searches. The app range, although currently limited, contains most of the big names that you would want, Google Now is as cool as ever and it’s obvious to see how the directions and other location-based features will prove useful. It’s also pleasingly quick and easy to capture videos and photos.

That said, many of these potential strengths are not quite realized in the best way in the current iteration of Glass. One of the most obvious instances of Google developing a feature because it could, rather than because it would be truly wanted, is the ability to take a photo by winking one of your eyes (the alternative being to use voice command, which takes a little longer). This is one place where wearable tech should – and does – have an obvious advantage over a smartphone; instant capturing means no photo opps are missed while you rummage for your mobile and fire up its camera. But after you’ve had a little fun “calibrating” Glass to your eyes and winking cheekily at colleagues to capture a photo of them, the idea of doing this while out and about is (for this user at least) incredibly unappealing. In fact, most people are still pretty nervous when they see you’re wearing Google Glass: the perception remains that everyone who uses the device is capturing footage on a constant basis.

This touches on a wider problem which cuts across the whole Glass experience: you get the sense that developers have spent so much time concentrating on the appearance of the device itself that they’ve forgotten about how the user behind the Glass will look (or want to look). Too often, interacting with Google Glass makes you look thoroughly distracted. Or, worse, a little stupid. It’s just too obvious when a user is looking at the screen, something which undermines how stylish the device itself can be in isolation. Similar frustrations emerge in relation to the “OK Glass” command; it’s fine at first but the device’s need for constant confirmation quickly becomes frustrating. There’s also far too heavy an emphasis on connecting to Google+, while the battery life simply has to get better.

As our chart shows, one of the other challenges facing Glass (and its competitors) is that consumers in the US and UK aren’t yet especially enthusiastic about wearable tech. Around 10% in both countries say they have used a gadget like a smart watch or smart wristband, with about a third in each market expressing interest in doing so in the future. That total interest approaches or indeed passes the 50% mark among men, 16-34s and top income consumers is cert 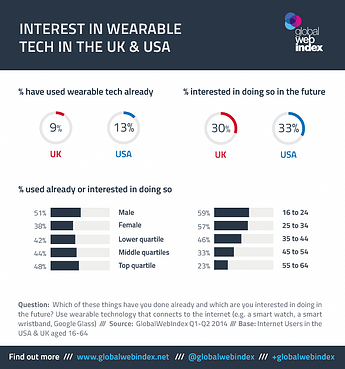 ainly noteworthy, but Google Glass hasn’t (yet) found a place in our hearts.

None of these issues represents a fatal blow for the device, however. As we’ve noted, this is still the beta version and a few tweaks here and there would transform the user experience. If the gesture for capturing a photo was changed from a wink to something slightly more acceptable, for example, then you’ve suddenly got an amazing – and genuinely useful – feature that no smartphone would be able to replicate. And this is exactly where Google needs to go on the attack: so many of the activities that we currently carry out on our phones could easily migrate to Glass and become extremely intuitive, quick and – crucially – hands-free.

There can be little doubt that Google Glass is a device which has the potential to be genuinely game-changing in a future incarnation. Sure, capabilities need to evolve, public perceptions need to shift, the price-tag needs to fall and Google needs to give us better reasons to use it. But all of these hurdles are perfectly jumpable. It’s still legitimate to question whether “typical” consumers will be using it on the streets any time soon, but its potential applications in more specialized contexts are already immense (it’s not hard to picture subsequent versions being used by health professionals, inside industry or in military environments, for example). And the glimpse it gives us into just how much more connected and internet-integrated our lives could soon become is genuinely exciting.

For the moment, though, we should just enjoy Google Glass for what it is: a fun novelty with some seriously cool – if not yet fully refined – capabilities.