Gaming is now a truly global and universal activity – only 20% of GWI’s respondents report that they have never played a game. And the value of gamers was recently reinforced by Microsoft’s acquisition of Swedish game developer Mojang for $2.5billion and Amazon’s purchase of gaming video-streaming service Twitch for $970million. But what is it about the profile of gaming audiences that has convinced these tech giants to spend so much money?

In this report, GlobalWebIndex draws on its extensive quarterly data to examine the profile, attitudes and online activities of mobile and console gamers.

* Across GWI’s 32 countries, there are now more female gamers aged 25-44 than there are male gamers in the 16-24 bracket – a clear challenge to the traditional idea that gaming is dominated by young men. Overall, 4 in 10 gamers are now female and a majority of console gamers are aged 25-34.

* APAC dominates for both console and mobile gaming; two thirds of Chinese internet users report that they play games on their mobile phone and half of Xbox One gamers in Q1 and Q2 2014 were located in APAC, despite the fact that the machine was yet to launch in China. With this year’s repeal of the ban on console gaming in China, Asia will become an even greater force in the gaming world.

* Though they are more likely than average to own an iPhone, more than half of console gamers are using Android phones. Android is the clear favorite among mobile gamers too: 64% of this audience are using the Android OS, with almost half having a Samsung handset

To learn even more about gamers’ demographics, interests and behaviors, download the full version of this report from the Insight Store, <ahref=”https://www.globalwebindex.com/products/report”>here. 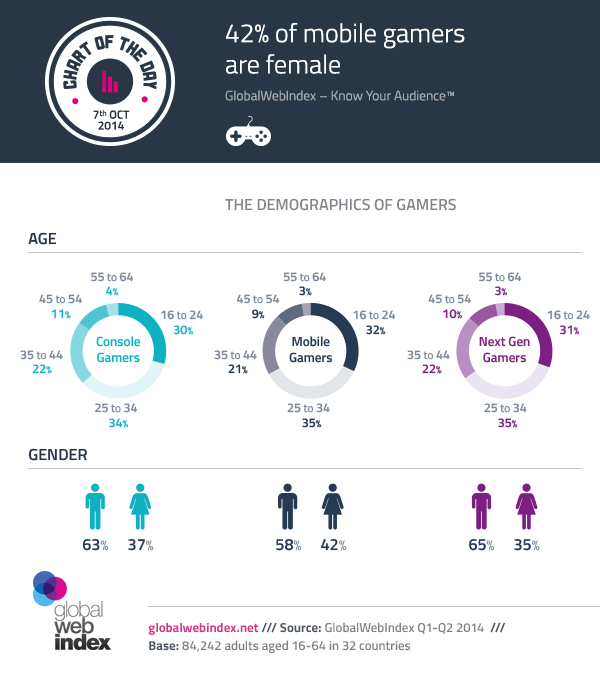