With Instagram having introduced ads to its UK service this week – following a similar move in the US last year – today we preview GWI’s brand new infographic on Instagram users.

As our data shows, the Instagram audience is a highly attractive one for advertisers. Not only are the bulk of its users drawn from the youngest age brackets (with 41% in the key 16-24 demographic), but – compared to the global average – they’re also significantly more likely to be in the top income quartile.

Worldwide, some 20% of internet users aged 16-64 now have an account on service, a figure which has shown consistent growth over the last year (having risen from 15% in mid 2013). But this headline figure can rise even higher in certain regions, peaking at around a third in Latin America and the Middle East.

Elsewhere on our infographic, it’s clear that Instagram users are active on a range of other platforms too. It’s hardly surprising that 95% have a Facebook account; it’s perhaps more noteworthy that 83% are on Twitter and Google+ too. This is yet more evidence for the multi-networking trend: people aren’t abandoning certain platforms in favor of others, they’re simply using a diverse combination of social networks for different tasks. 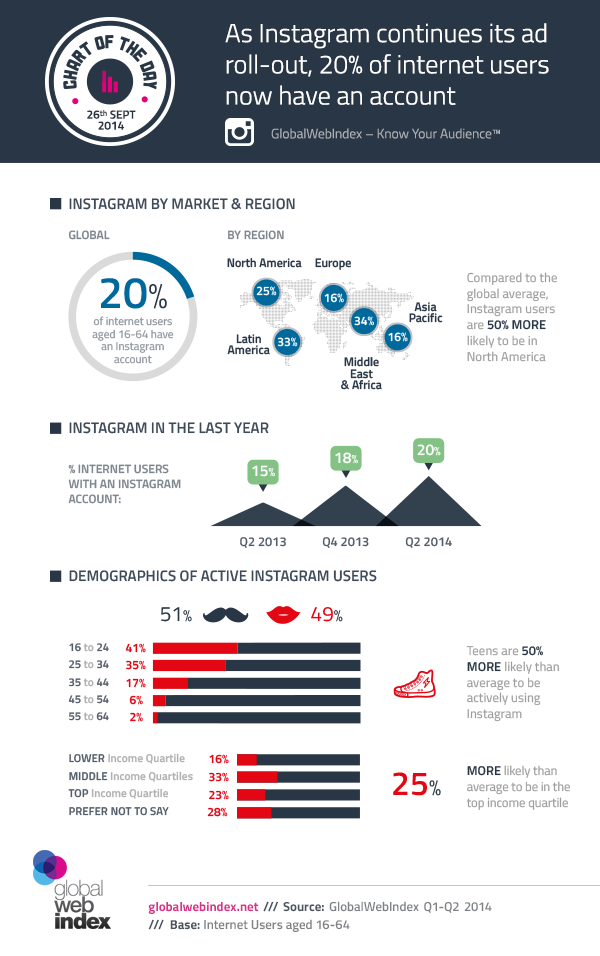