This week GWI released another 5 infographics on our Insight Store, profiling the demographics, attitudes and digital behaviors of the Reddit, CNN, Discovery, Huffington Post and Financial Times audiences.

Here we present some highlights from the Reddit infographic, which underlined the highly young, connected and social character of the platform’s global user base. 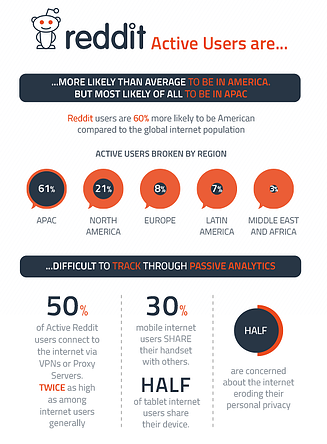 While some of its findings are in line with what we might expect – e.g. three quarters of all Reddit’s users are under 35, while two thirds live in urban areas – some of the other headlines might be more surprising for some, especially in terms of the geographical breakdown of where Reddit users are based.

Two continents dominate for Reddit – with about 60% of its users being based in Asia Pacific and a further 20% in North America. If we compare this to the geographic breakdown of the global internet audience generally, Reddit has a higher than average share based in North America. However, it’s APAC which accounts for the lion’s share and there are two main factors which explain this. Firstly, the huge sizes of the online populations in countries like China and India mean that only very small percentages need to use a platform in order to dominate its user base. In this instance, just 2% of online Chinese adults said they had used Reddit within the last month – putting it behind America in terms of simple percentages – but when converted to millions of people, this 2% means that the Chinese audience is bigger than the equivalent from any other market.

But the skew towards APAC in our data is also a result of widespread VPN usage making passive analytics figures potentially inaccurate. Significantly, some 50% of Reddit users say they have connected to the internet via a VPN or Proxy Server, meaning that passive measurement studies will often record them as being in a mature market like the US. That’s in fact one of the main reasons why traffic to so many of the big global sites seems to be dominated by American audiences – people from elsewhere are being incorrectly tagged as being in the US due to automatic re-routing or VPN usage. This typically leads to a dramatic under-estimation of audiences in continents like Asia Pacific and Latin America, where VPN usage is much more common than in places like Europe or North America.

Elsewhere, our infographic shows that Reddit users are highly active on other social platforms too: about 95% have accounts on Facebook and YouTube, while 87% are on Twitter and 78% on Instagram. This is yet more evidence for the trend towards using multiple networks for different purposes, rather than abandoning one in favor of another.

For further insights on the Reddit audience, you can access the full version of the infographic here.