Mobile networking behaviors: growth across the board

At GWI, we track a wide range of behaviors on social platforms – looking at how many people are interacting with content (by liking, following, sharing or viewing it) as well as which devices they’re using.

In our latest wave of research, released this January, what’s particularly striking is the uniform growth for these behaviors via mobile. In our chart, we show the options on Facebook where the estimated global audience numbers have risen the most – with buying products/services, following pages and sharing videos topping the list. But increases can be seen right across the list: every single option we measure has risen via mobile between Q2 and Q4.

If we switch our focus to PCs and laptops, though, quite a different picture emerges. The same list now shows decreases for every single behavior – with the biggest drops (of nearly 10%) being for sharing branded photos and posting updates about daily activities.

For tablet internet users, the picture is mixed; buying products/services and sharing photos have increased but the overall story is one of little significant change.

Clearly, then, it’s mobile networking that’s driving the biggest growth here, a situation which is confirmed when we analyze comparable data for other social networks. On Twitter, for example, Q2 to Q4 saw the number of mobile networkers asking questions, posting brand-relevant comments and sharing videos all increase by 20% or more.

Of course, all this doesn’t mean that PCs will be abandoned. But that the networking audience will be characterized by an increasingly “mobile-first” mindset seems beyond doubt. 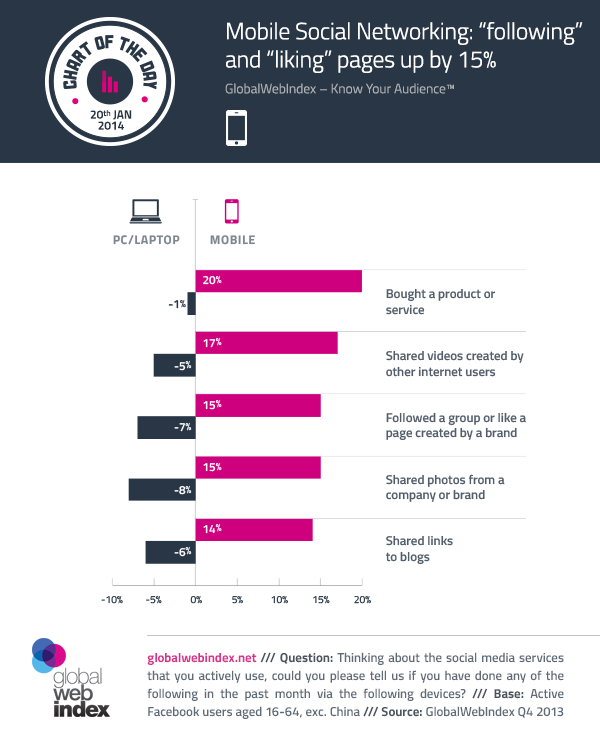