As we explore in our new Missing Billion report, a number of trends have combined to see internet populations in fast-growth markets being under-represented in passively collected datasets.

Alongside factors such as VPN usage and device sharing, one of the contributors to this problem is the truly multi-device nature of how people now use the internet.

Although mobiles and tablets have been enjoying strong levels of growth in recent years, it’s not that some devices are being abandoned in favor of others. Rather, most internet users are now going online via multiple access points – turning to a PC, laptop, mobile or tablet as location and activity dictate. GWI’s latest research in fact shows that we now use an average of 2.3 devices to go online each month, with only a relatively small proportion using just a PC.

It is in China where people are typically using the highest number of devices to go online, followed by other fast-growth markets such as Hong Kong, Singapore and Turkey (something which reflects the less historically prominent role of PCs in emerging internet nations as well as the widespread availability of low-cost mobiles and tablets).

Not only does this make it extremely difficult to track an individual’s behavior across devices (particularly if they are not logged in), but investment in non-PC measurement is virtually non-existent outside of the US and Western Europe. As we discuss in more detail inside the report, the result is that numbers of internet users, and usage levels, inside fast-growth markets are often being under-estimated. 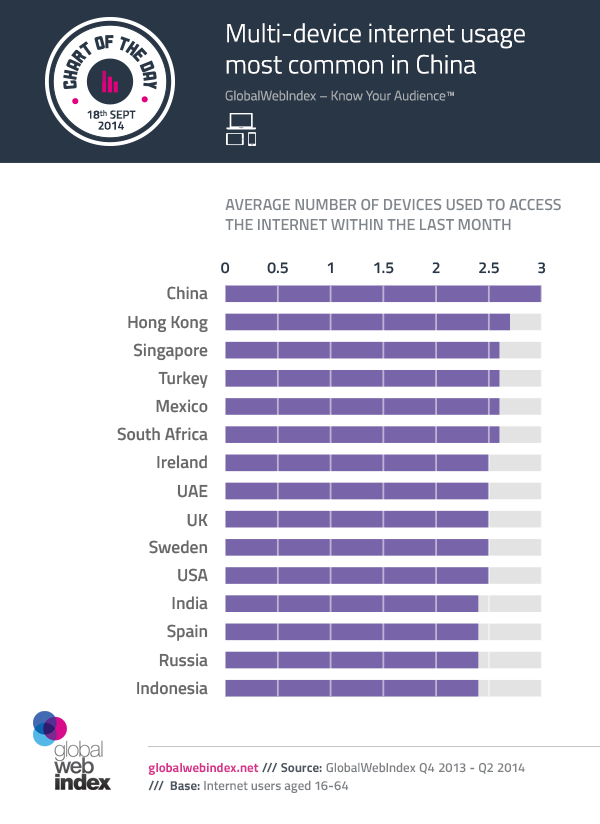