To mark the release of our new GWI Social report (download a free summary here), today we look at the continued rise of multi-networking.

GlobalWebIndex tracks membership of around 50 named social networks/platforms/apps, ranging from global names like Facebook, YouTube, Twitter and WhatsApp to country- or region-specific services such as VK in Russia. Back in 2012, digital consumers had an average of just over 3 accounts; in 2016, this figure has risen to over 8 – with 16-24s very much at the forefront.

This isn’t a simple by-product of widening choice alone; rather, it’s being caused by a degree of specialization (with some users turning to particular platforms to carry out certain types of networking behaviors) as well as the close association between mobiles and networking. In short, the type of anytime, anywhere access that smartphones are facilitating is driving engagement with a wider range of names.

In terms of visitation, Facebook is still king of the social networking world. However, the multi-network approach that people take to their social behaviors illustrates why many campaigns now want to put their eggs in multiple social baskets.

Clients can download the full version of GWI Social here. 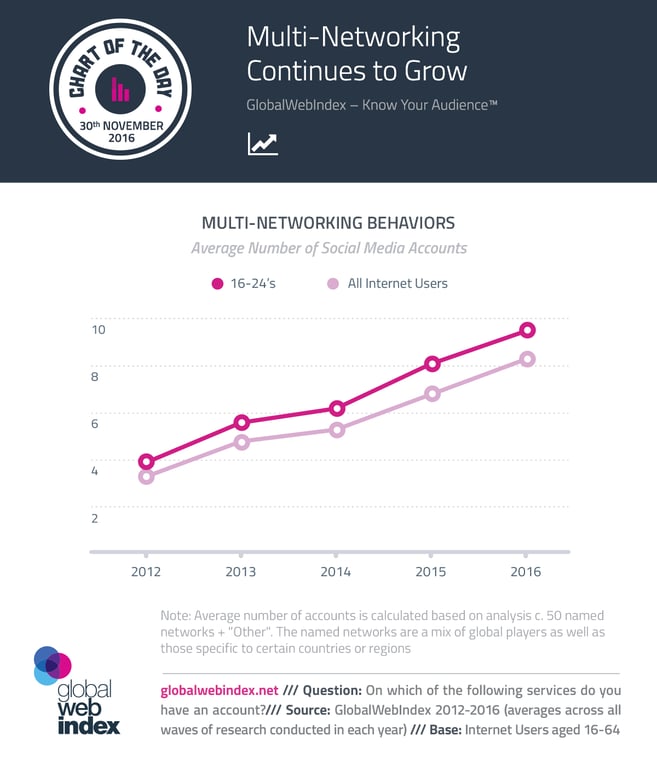