Nearly 50% of teens in the UK and Canada using Snapchat

Following on from yesterday’s post, which compared the relative of fortunes of WhatsApp and Snapchat, today we look at teen usage of Snapchat in the service’s top five markets.

Across GWI’s 32 countries, Snapchat enjoys its highest usage figures in the UK, USA, Ireland, Canada and Australia. With all of them being mature markets where digital behaviors tend to generate the most headlines, it’s little surprise that the app has been receiving so much attention since turning down Facebook’s offer earlier in the year.

But it’s among the key teen demographic (defined here as 16-19s) where Snapchat has been performing the most buoyantly: nearly 50% of this group are monthly users in the UK and Canada, with the figures also topping 40% in the other three markets.

What’s more, Snapchat is ahead of WhatsApp among teens in all five of these countries, and has even passed Facebook Messenger in Canada and the USA. Despite a range of Snapchat competitors being launched in recent weeks, then, they’ll have a lot of ground to cover to challenge Snapchat’s popularity among the youngest mobile internet users. 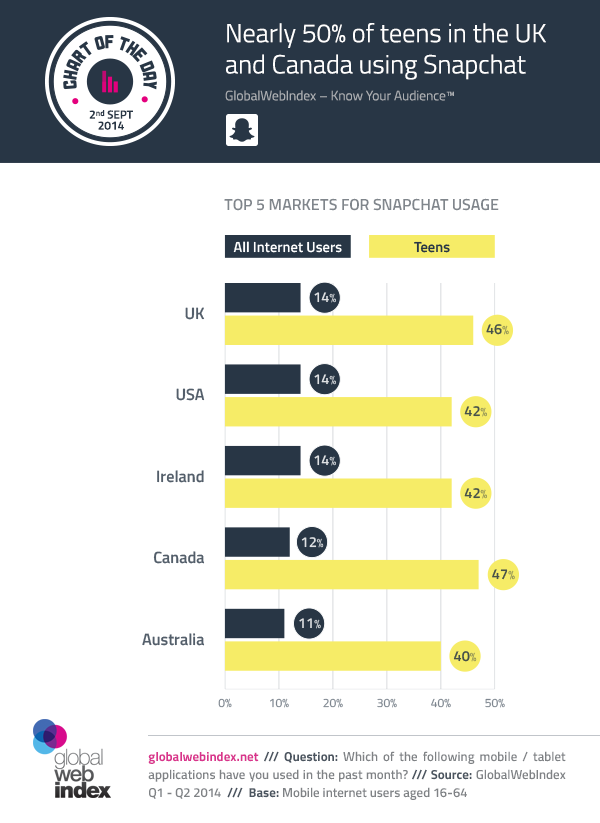