This week Apple will once more gather a portion of the world’s media in Cupertino to share its vision of the future. After the hype surrounding the iPhone 6 and Apple Watch, however, this event will be smaller – focusing on the future of the iPad.

But will the improvements that Apple is expected to announce – including a new iPad Air, an updated iPad Mini and a new 12.9-inch-screen iPad ‘Pro’ – re-energize consumer demand for the iPad?

GlobalWebIndex’s research shows that 33% of internet users are now getting online using a tablet device but that the rate of growth has been slowing for the last few quarters. So, while numbers are bound to continue creeping upwards gently over the next few months and years, the boom days could be over (for more on this, see our Tablet Trends Report here).

One of the reasons for this is that tablet usage remains relatively low among 16-24s, with just a quarter of iPad users falling into this age bracket. Normally at the forefront of new tech adoption, this segment has been priced out of the market and have instead turned to mobiles.

Overall, in fact, current iPad users are most likely to be affluent, aged 25-34 and working at a managerial level. 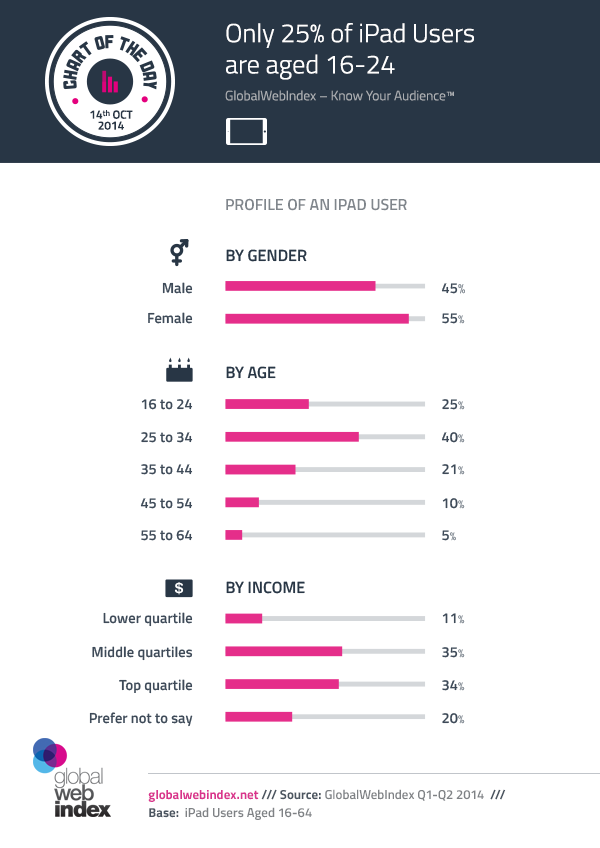