Teens 2.5 times more likely than average to use Snapchat

As the buzz surrounding messaging apps shows no signs of abating, Snapchat was valued at a mighty $10 billion by investors last week.

At just over half the price that Facebook paid for WhatsApp, our first post this week compares the progress of the two apps – tracking the global popularity of the one that got away vs the one that Facebook successfully integrated into its offering.

Across GlobalWebIndex’s 32 markets, WhatsApp is the clear leader; a quarter of the mobile internet audience aged 16-64 are now using it, and the app continues to post quarter-on-quarter growth. Snapchat is also climbing, but from a much smaller base and at a slower rate; by Q2 2014, Snapchat’s global audience was just a fifth of WhatsApp’s.

But look at the usage figures among teens (defined here as 16-19s) and there’s an obvious reason why Snapchat has been valued so highly; usage among this demographic jumps to 13% – with teens in fact being 2.5 times more likely than average to use the service. In comparison, 16-19s are actually slightly less likely than others to be on WhatsApp.

Of course, context is crucial here; at 24%, there are still nearly twice the number of teens on WhatsApp as there are on Snapchat. But the relative appeal of the latter to this key demographic is nevertheless clear and, as we will explore in tomorrow’s post, teen usage figures in certain markets rise much, much higher. 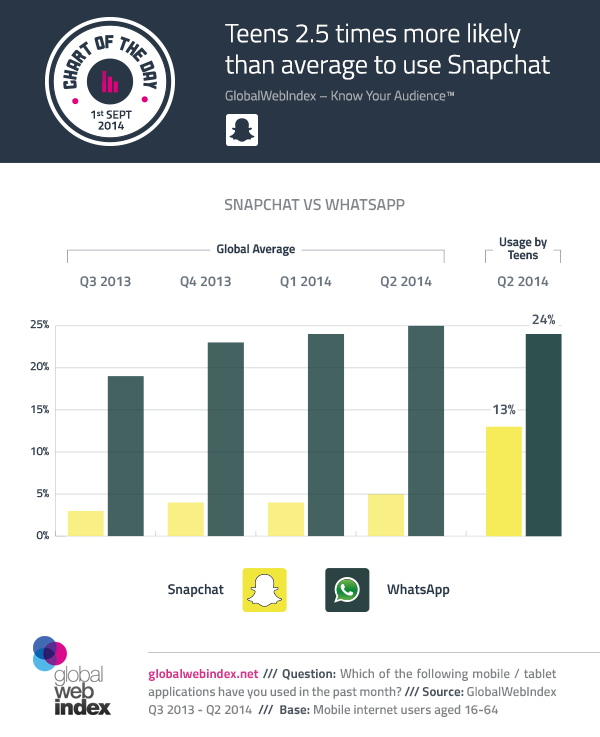