The iPhone 6 is coming – but is it too late?

Apple’s announcement that the much-awaited iWatch is finally on the horizon dominated yesterday’s headlines. But it’s the arrival of its two new iPhone 6 models which will bring the company the bulk of its profits and which will lead the fightback against Android’s increasingly dominant position within the global smartphone market.

With a screen measuring 5.5 inches, the iPhone 6 Plus represents a clear attempt to capture a slice of the “phablet” sector – an area where Apple has lost considerable ground to Android over recent years. But while Apple might not appear too concerned about being relatively late to both the smartwatch and “phablet” parties – pointing out that it has a history of entering sectors after others and yet still establishing a commanding position – GWI’s data shows just how much of a lead Android has now established.

By the middle of 2014, just 20% of the mobile audience across GlobalWebIndex’s 32 markets were using Apple’s iOS on their phone. This compares to a mighty 68% using Android.

If we drill down into this on a country-to-country basis, it’s clear that Apple performs much more strongly in some of the most mature markets – with the iPhone enjoying its highest usage figures in Australia (42%), the USA (41%) and Canada (38%). Nevertheless, Android is still ahead even in these markets and, if we then turn our attention to the top 10 nations for Android usage, Apple’s problem is clear to see. Across a wide-range of fast-growth markets – where internet populations are rising rapidly each year and where the mobile internet is a hugely important gateway – Android’s usage figures are typically four to five times higher than those for Apple.

In the key markets where digital trends are scrutinized the most closely, the iPhone 6 models are certainly likely to please fans and prevent them from migrating to Android. But Apple will face much more of an uphill battle in fast-growth nations where cheaper and longer-established Android models have for some time now been the first choice. 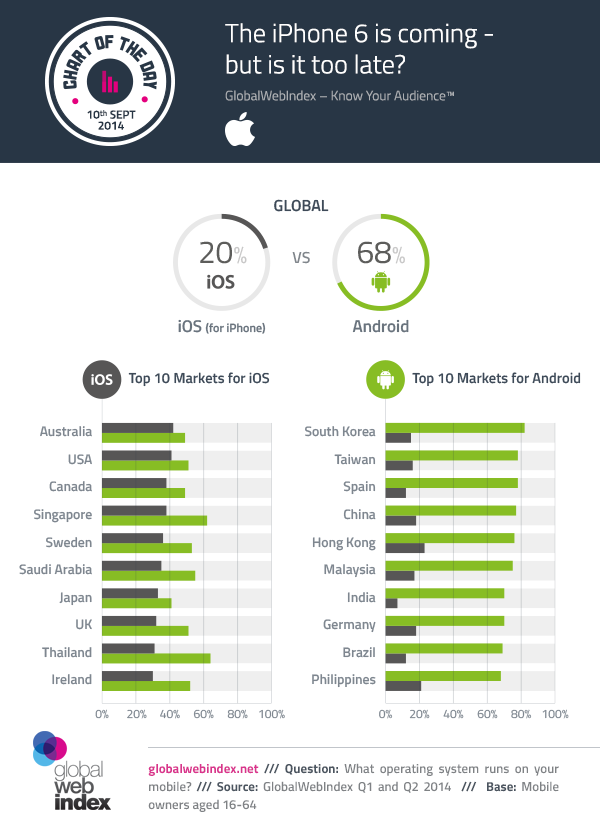