The Whisper Revelations and the Fight for Online Privacy

Whisper was positioned as a safe environment where users could anonymously share their innermost thoughts. But investigations by the Guardian US have now cast doubts on the credentials of an app that declares itself to be the ‘the safest place on the internet’.

It is easy to see why Whisper and other anonymous social networks, like Secret and Yik Yak, are booming in popularity. GlobalWebIndex’s research has shown that 60% of US internet users prefer to be anonymous when using the internet and one third are going online to take on a different personality. Whisper’s platform, which allows users to post without any associated profile data, is clearly capitalising on these desires.

However, these recent disclosures have shown that there is a difference between being anonymous and being invisible. The app is reported to have been collecting a database of posts, including those that users have deleted, and it also has the ability to geo-locate users to within 500 metres. Some of this data has been shared with the US Department of Defense, FBI and MI5.

Before this furore, Whisper claimed to be carrying 2.6 million messages per day and had been valued at over $200 million. Its success was widely reported to have been the catalyst for Facebook starting development of its own anonymous networking app. But the revelations about Whisper are likely to unsettle those internet users who are concerned about their digital footprints. Some two thirds in the US, for example, are worried about how their personal data is being used by companies. Almost the same proportion are concerned about the internet eroding their personal privacy.

This apprehension is spurring America’s online population to act. 30% have now used services such as DoNotTrackMe to stop companies from monitoring their internet activities, while almost half are deleting their cookies at least once a month so that websites will not remember them. Clearly, Whisper’s users are not the first to realise that their actions are being tracked, with many now taking pro-active steps to control their online presence.

Whisper may have billed itself as a safe haven for internet users but these revelations have again demonstrated that fight for online privacy is only just beginning. 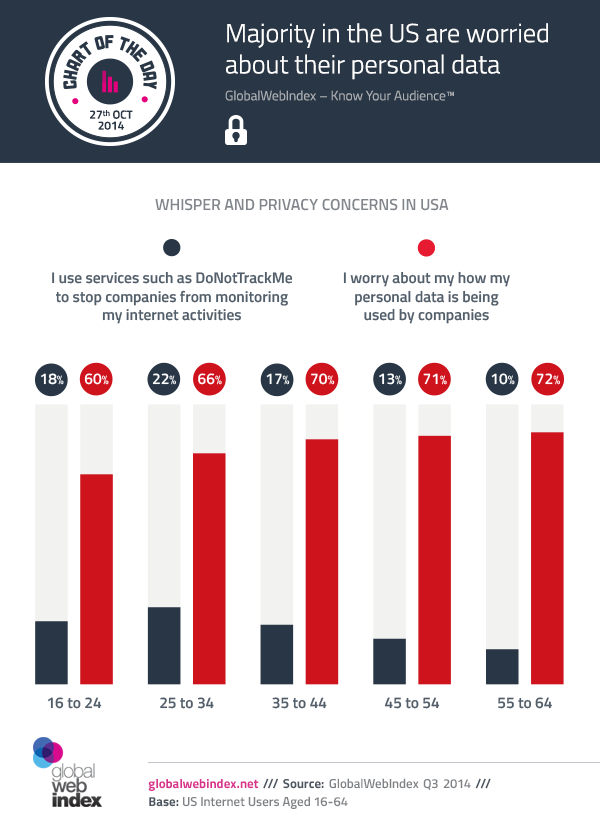