Continuing our preview of GWI’s Trends 2016 report, this year’s final Chart of the Day looks at the growing importance of India.

The country’s 1.25 billion strong population is relatively young, increasingly brand-hungry and, most importantly, largely unconnected to the internet. Of the 34 countries tracked by GWI, it has one of the very lowest internet penetration rates, with the figure still stuck below the 20% mark.

Unsurprisingly, it’s mobile which is the metric to watch in all this; 85% of India’s digital population are now accessing the internet via these devices, a figure which has increased by 30 percentage points since Q2 2012. What’s more, average time devoted to mobile each day has more than doubled since 2012, jumping from about 1.5 hours to cross the 3 hour per day mark in 2015.

Seen in this light, it’s obvious why Mark Zuckerberg is keen to increase internet coverage in countries like India and why the company has invested so much time and effort into Facebook Lite – a mobile-friendly version of the service designed for those who need to use it in relatively data-light ways. Over the last year, we’ve had the arrival of a comparable offering from LINE and you can bet that others will follow suit in 2016. Quite simply, for those global services eyeing up new growth opportunities, stripped-down or lite versions of their offerings will be key to winning over tomorrow’s mobile-first but data-poor internet users.

Chart of the Day is now taking a break for Christmas, and will return on Monday 4th January. 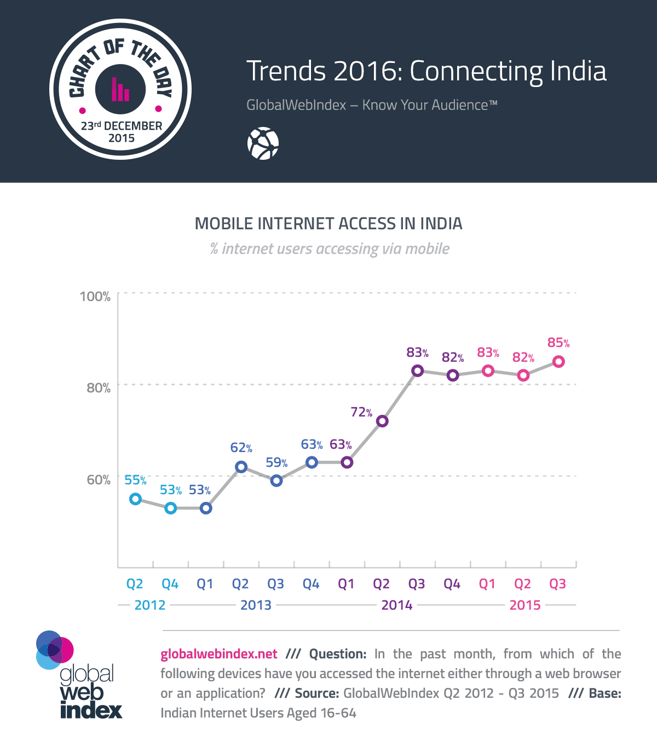