As we discuss in The Missing Billion (our white paper on audience measurement), usage of Virtual Private Networks (VPNs) and Proxy Servers is much more common than traditionally assumed.

Globally, more than a quarter of internet users say they’ve accessed the internet via one of these tools, with the figures rising much higher in many fast-growth markets.

There are a number of reasons for going online in this way – from wanting to stay anonymous to accessing restricted websites – but the most common of all is to find better entertainment content. This is a trend which brings major implications for some of the world’s major content-providers; as our chart today shows, significant percentages of VPN users in countries like China, India and Indonesia are accessing services such as Netflix, Amazon Prime and BBC iPlayer.

By connecting via one of these tools, internet users are bypassing geo-restrictions which would typically limit the content in question to individuals based in the USA or UK. In short, people are visiting these content sites under the cover of a VPN to get better shows than are available in their own markets. The consequences this brings for accurate audience tracking cannot be overstated – and represent one of the many themes we explore in more detail inside the Missing Billion. 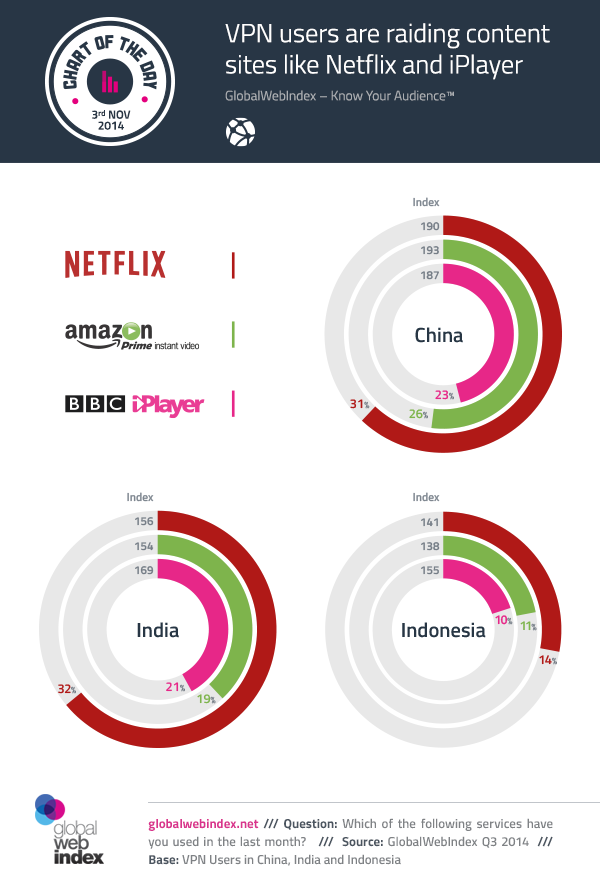