What Amazon Video Direct tells us about the future of video

Amazon’s latest venture – Amazon Video Direct (AVD), a service that allows users to upload and monetize their own videos – has confirmed online video’s status as the story of the moment. But upon launching, the interpretations of AVD were mixed: would it compete with YouTube? Or would it compete with Netflix or HBO? Indeed, the multi-faceted nature of AVD is quite unlike anything we’ve seen before, and it can tell us a lot about the future of online video.

Amazon is renowned for turning up fashionably late in its business ventures – from streaming sticks to premium video content, Jeff Bezos & Co. have built an impressive ecosystem of services which have given established competitors a run for their money. But in this case, it wasn’t immediately clear which industry AVD was entering. Like YouTube, the focus is on user-generated content. But unlike YouTube, the procedure of uploading a video is much more rigorous: users must submit bank account and tax details, with relatively long delays in publishing uploaded videos, veering away from YouTube’s quick and simple upload process. In short, it appears that Amazon is deliberately shying away from the run-of-the-mill viral cat videos of YouTube, towards more of a professional content agenda.

This helps to explain why a selection of high profile brands and media providers have already partnered with AVD to push their own content. GWI’s data confirms the appeal of such content – over a fifth of online adults in the UK, US, Japan and Germany (AVD’s launch markets) have watched a video made by a brand in the last month. What’s more, this is a figure which remains fairly stable across the 25-64 age groups but, significantly, rises to almost 3 in 10 among the ever-important 16-24 age group. All this suggests that there will be a receptive audience for AVD’s content.

AVD, of course, marks another step in Amazon’s drive to increase Prime membership and bring consumers into the Amazon ecosystem. But look a bit deeper than this, and it’s also a signal of the relentless march of online video. More and more services are looking to harness the power of online video to increase its audience. AVD’s blurring of the division between premium and user-generated content will help Amazon bulk up its content offerings, with branded videos sitting alongside blockbuster entertainment. And the opportunity to monetize its audience is also clear, as AVD’s focus on professional branded content effectively represents a form of visual native advertising, where product placement will no doubt have a strong presence.

Should AVD’s model catch on, it could have far-reaching consequences on both the ad-industry as well as the entertainment industry, potentially leveling the playing field between blockbuster and semi-professional content. 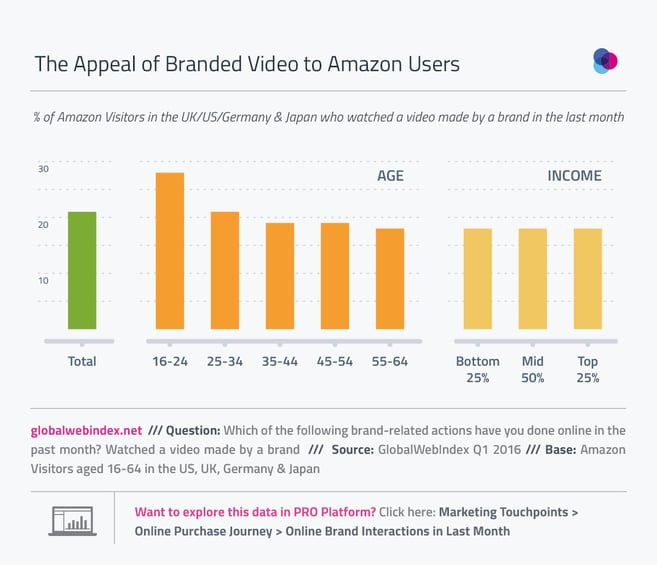