So, after unsuccessfully trying to woo Snapchat, Facebook has bought WhatsApp instead. But the question everyone is debating is: why?

Well, for a start, mobile messaging tools have seen huge growth in the last twelve months, and more than 200 million people globally now report being regular users of WhatsApp. Officially released stats put the figure somewhat higher, but it’s important to note that GWI tracks active usage – people who say they are actually using the app each month, rather than just having it installed on their mobile. For us, it’s this audience measure which is the most important – and it’s one which has risen by an impressive 175% in the last year.

Arguably, though, it’s by looking at growth rates at a regional level that we find the most revealing insights as to why Facebook has acquired the service. Yes, WhatsApp is seeing substantial growth in all parts of the world and can boast its biggest audience size in the key Asia Pacific region. But just as significantly, WhatsApp is growing fastest in North America. Admittedly, the numbers using it there remain small – especially from a global perspective. But during the same period that WhatsApp has been rising in this region, active usage of Facebook itself fell by 15%. Not only can the social networking giant take advantage of WhatsApp’s global appeal, then, it can also hope to attract some of its core American audience who have been looking elsewhere in recent months. 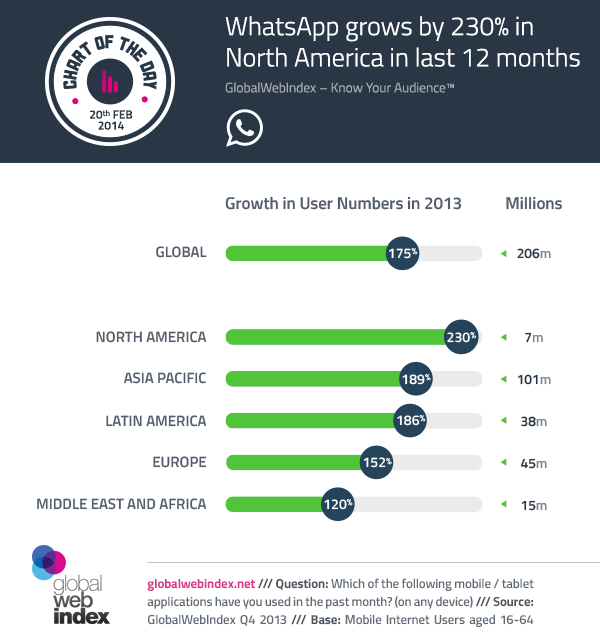 For the latest insights on social networks and app usage, see our GWI Social and GWI Device reports. You can download free summaries here and here