Following Friday’s examination of recent trends related to the decline in Facebook usage among teens, GlobalWebIndex’s Stream Analyst team turned their attention to the social platforms and applications that have replaced Facebook. The chart below looks at the change in active usage of social services and mobile apps of teens aged 16-19, and there is a very clear story with the big winners being messenger, video and photo apps. WeChat has growing a staggering 1021% between Q1 and Q3 in 2013, followed by Vine (639%) and then Flickr (254%).

The trend towards mobile messenger apps is even driving new growth of Skype which has grown 105% while Facebook Messenger which has grown 89%. Also, while active usage of Facebook shrinks as a whole (down 17% in the period), there is also a large rise in their mobile app (up 69%), demonstrating the on-going shift to mobile as the primary connected device. 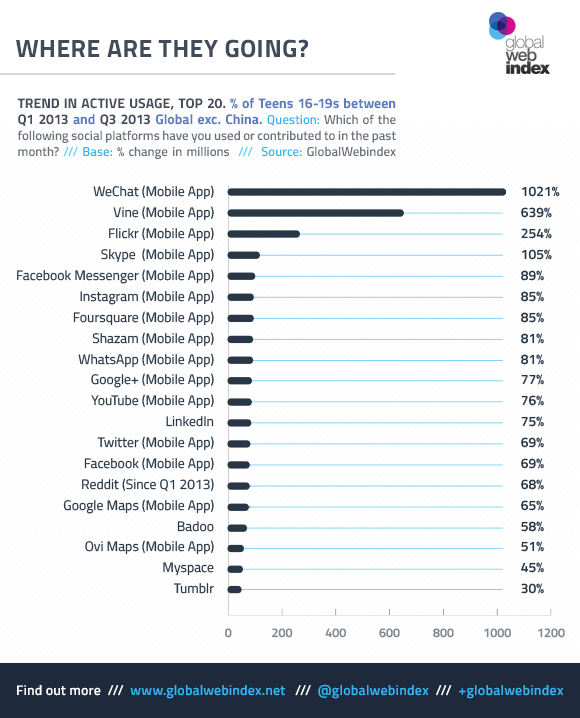 The growth in these mobile apps, however, comes from a low starting point when we compare them to the likes of Facebook and Twitter. The growth rates, impressive as the are among teens, mask the all-important fact that Facebook is still far and away the largest social platform and mobile app used. We can see in the second chart below that 56% and 43% of teens globally (excl. China) are actively using Facebook and its mobile app, respectively. If growth continues apace, however, we will see these mobile chat apps catch up quickly.

Another service that we must include is Snapchat. It was only added to GlobalWebIndex’s Core research in Q3 2013 so we have no trend data yet, but we can already see that 10% of teens globally are using the popular photo messaging service, making it bigger than Pinterest, Vine, WeChat, Line, and LinkedIn. Moving forward, we’ll be able to project Snapchat’s growth rate among teens around the world in order to determine how big of a threat it presents to Facebook and co. 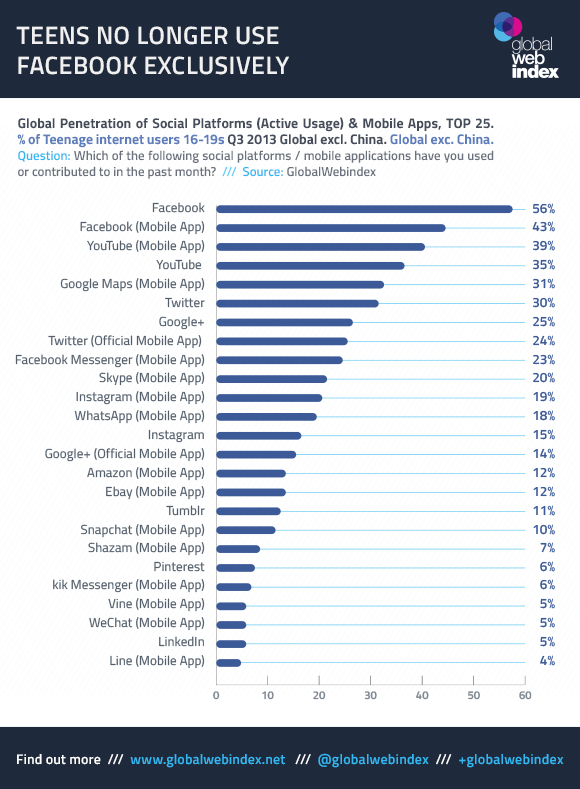 There is a clear trend to single purpose social apps along private and closed messaging services. This is something that could be particularly harmful to Facebook because its core value lies in peer to peer public sharing. Thinking about the impact on other big social platforms, this is a trend that will have less impact on Twitter where the key value lies in accessing real-time news, interacting with TV or following celebrities.