Why did Amazon buy Twitch?

Amazon’s $970 million acquisition of Twitch – the 3-year-old video game streaming site – can be seen as a statement of intent.

Following the self-publishing movement from Amazon’s Kindle store, the curation of its own App Store, Amazon Studios creating its own TV Shows for the Prime Streaming service and, more recently, its own video games through Amazon Game Studios, it’s clear that Amazon doesn’t just want to sell you products. Amazon wants to be a publisher as much as a retailer. And it wants you to be fully immersed in the whole Amazon ecosystem.

Across GWI’s 32 markets, our latest research shows just how big its potential audience has become. Globally, an impressive 49% of internet users aged 16-64 said that they visited the site last month. But this can rise much higher within individual markets, peaking at 79% in the UK, 75% in Germany and 72% in the US.

So, why Twitch? Well, it’s a video game live broadcasting website that allows anyone to stream themselves playing video games and to interact/converse with others in real-time. It has reported seeing over 45 million visitors every month (https://blog.twitch.tv/) and at peak times in the US it says it drives more traffic than Facebook or Amazon.

In GWI’s research, it’s clearly significant that 45% of Amazon visitors express a strong interest in gaming. So too can we note that gamers are 20% more likely to spend 6 to 10 hours online each day and 30% more likely to spend over 10 hours. But while the live broadcast is a huge draw, the live chat is also a significant reason for Twitch’s success. It might be less of a stream of a consciousness and more a tidal wave of emoticons and memes, but it has created a sense of community which is embraced by both the watcher and broadcaster.

Visitors to Amazon are already among the most prolific on video streaming sites; they are 76% more likely to watch on-demand TV and 65% more likely to stream live TV. But the key differentiator between Twitch and a platform like YouTube is that Twitch is only for video games. Amazon is getting a dedicated and passionate user base that is heavily invested in the service, and there is no real competition in the market. The opportunities for highly targeted and effective advertising are thus considerable. 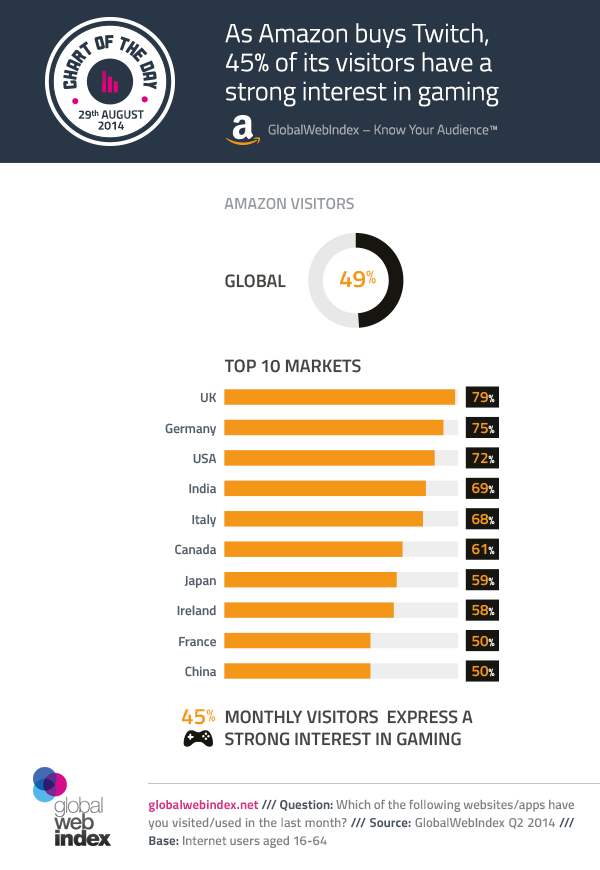