Why Emerging Markets are Key to Apple’s Future

Think about the world of smartphones and it’s Apple’s iPhone which remains the most iconic – and which is without doubt the one that grabs the most attention and headlines.

Across almost all of the markets surveyed by GWI, however, Android has the lead for mobile operating systems and Samsung is in pole position when we look at handset brands. That’s a sign of how effective the Apple marketing machine has been in pushing the notion that the iPhone and iPad are the smart devices par excellence, despite ownership figures showing otherwise.

Apple does have much to shout about, though. As we’ve noted in our new market reports, Apple users in most countries are much more likely to come from young and affluent groups. It also tends to post its strongest ownership figures in key mature markets, such as the UK, USA, Japan and Australia. But it’s the stats surrounding future purchase intention that I want to examine here.

Within the GWI survey, digital consumers are asked to consider which mobile brands they would definitely consider purchasing in the future. Certainly, there will always be a gap between expressed intentions and actual behaviors. But even so, market-by-market trends are still pretty revealing here.

Broadly speaking, countries divide themselves into two groups. There are the mature internet markets where, despite the buzz surrounding Apple, it’s Samsung which comes first for current ownership and future purchase intention. But then there are the emerging internet markets, where Samsung is typically first for ownership whereas Apple’s iPhone jumps up the rankings to take top spot for future purchase consideration.

Looking at four representative GWI markets is the best way to bring this trend to life. If we start in a mature market like Germany, Samsung has a clear lead on both metrics. So, while 35% of the country’s digital consumers would think of getting a Samsung in the future, just 19% say the same about an iPhone. The contest is much closer in a place like the US, where Samsung is just a single point ahead of Apple for future consideration (it’s similarly close in the UK). 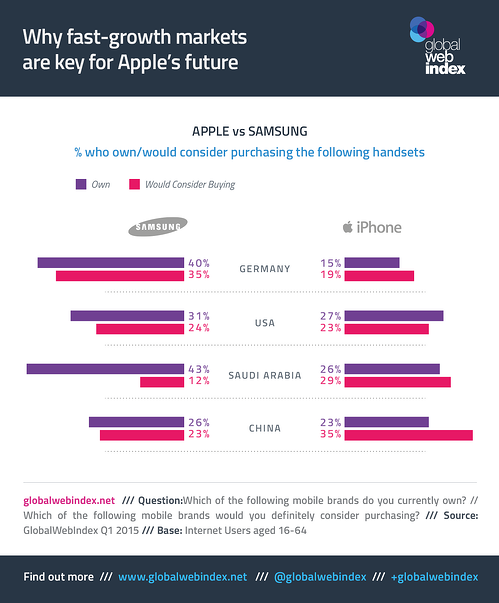 If we then move to an emerging market like Saudi Arabia, the changes in the numbers are pretty striking. Here, just 12% would think of buying a Samsung handset, whereas a substantial 29% favor Apple. And in China, the iPhone has a 12-point lead.

There are two things to note here. Firstly, that the iPhone is more of a status symbol in fast-growth markets is pretty clear. One of the reasons why future consideration tends to outpace current ownership by quite such a distance is that the price-point of iPhones makes them highly aspirational. Currently, the cost of entering the iPhone market is holding back many consumers in fast-growth markets.

But the second, closely related factor is that it’s in these places that Apple should find it easiest to win new users in the future; the majority of this decade’s new internet users will be coming from emerging nations and, as the middle classes in these countries continue to swell, Apple is well-placed to expand. Many would now point to China as the iPhone’s most important market, and that’s very much a sign of things to come – with fast-growth nations becoming increasingly key to the Apple brand.

When it comes to digital trends, at the moment it’s still markets like the US and UK which attract the most attention and which generate the most headlines. But in the years ahead, it’s fast-growth markets – especially those with huge populations like China, India and Indonesia – which are arguably the most important ones to watch.