It seems that the Apple iPhone 6 and iOS 8 event on Tuesday, 09/09/14/, has more speculation around it than previous events. Or maybe the competition really has stepped up in recent years. There are numerous product rumours – new iPhone(s), new iPad(s), new Apple TV and, of course, the rumoured smart watch. However Apple in the past has kept product launches separate, so Tuesday will most likely be focused on the iPhone and iOS 8 which we could see later this month. Apple will also have to address the issues regarding iCloud’s security.

Of course the most interesting rumour is if Apple will release a wearable device, in particular a smart watch which has been dubbed the ‘iWatch’ by the tech community. Apple will have to impress while playing catch up as there are plenty of smart watches already out for Android and being announced at the moment in Berlin at IFA. In addition to already having smart watches out, Google has pushed the software support with ‘Android Wear’ and big apps are starting to support them.

At the moment iPhone users are 5% less likely to have used a smart watch in the last month compared to the average consumer. Where as Android users are 12% more likely than the average. However there is comparable interest between iPhone and Android (both roughly 49%) users that have not used one but want to do so.

However, when you consider Apple’s competitors have had smart watches announced for over a year, they have not taken advantage of their time lead. Both groups show the same level of interest (around 20%), even though iPhone users have not been targeted to the same extent. Smart watches may require Apple to make them ‘cool’ before the general populace finds them desirable.

While on the surface, a smart watch seems little more than a small remote control for your phone on your wrist that could pause music and display emails. However the iWatch should be viewed similarly to the Handoff feature in the upcoming iOS 8 and OSX Yosemite. By checking notifications on the watch, the user can decide what actually needs the full phone to respond. Users could start the interaction on the watch, take their phone out and finish off the interaction on the iPhone. Apple has to make this seamless. On a simplistic level, the iWatch can be used to determine whether or not the notification is worth taking your phone out of your pocket. 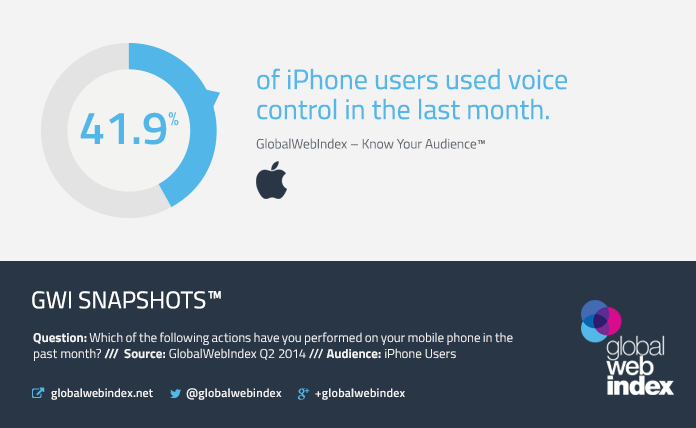 The small face of a watch limits touch interaction, however restriction forces designers to make efficient processes. An idea could be to implement Siri so that the user can interact fully with voice. Apple has really sold the idea of voice control through Siri and iPhone users are over twice as likely to have used voice control than the average person in the past month. This could be the Apple differentiator between Android based competitors as Google Now does not offer the same level of control over the phone that Siri does.

The ever increasing size of Android phones in recent years have been one of the more compelling reasons to switch to Android. The increase in screen size by Apple would be seen as a reaction to the popularity of the huge Android flagship phones. Samsung in particular as a slew of devices to try to create specific phones for specific people.

There is not that much difference between some of the larger phones and an iPad mini. A larger phone from Apple would probably cannibalise iPad sales, but Apple cannot afford to lose more market share.

The iPad sales have been slowing down partly because it could never sustain the incredible initial growth, but now larger phones can replace tablets. Year-on-year increases in user numbers have dropped from around a high at around +200% to just +15% in 2014. China and Taiwan have seen a decline in usage of 7% and 8% respectively. The tablet market overall is still going to grow, but existing tablet users are using them less than before.

The larger screened iPhone would provide a better media experience. Currently video on demand is very popular with 34.5% of iPhone users subscribing to a service such as Netflix, Hulu+, or Amazon Prime. This is compared to 23.5% of Android users. iPhone users are in fact 52% more likely to be a subscriber of these services than the norm.

An indication of the perceived interest in health and fitness was Apple’s recent ‘Strength’ ad. With the announcement of iOS8, Apple briefly showed off their upcoming Health app. The health app collates all the health tracking so that your other apps can use it. The ability to quantify ourselves with all the data could have impacts on healthcare and insurance. 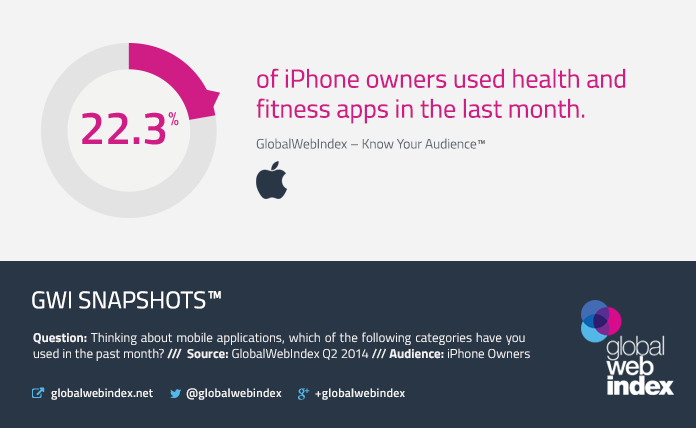 For more insight into iPhones, iPads and other smartphones and tablets take a look at our Q2 Device Report.