Today we released our third and final World Cup trend – this time looking at how recognition levels for official sponsors and competitor brands changed between the start and end of the tournament (download a copy here).

As we discuss inside the report, Coca-Cola and McDonald’s posted the best responses on the final weekend of the tournament (selected by 50% and 49% respectively). Following behind were some of the other biggest global names, including Visa (41%), Adidas (36%), Hyundai (28%), Sony (27%) and Budweiser (26%). The rest were recognized by a fifth or less, with the lowest levels for some of the more specialized or less globally known brands (such as solar panel provider Yingli and poultry company Moy Park).

But these global figures mask some very strong localized trends. Across the board, sponsorship awareness was at its highest in Brazil – with the figures often two to three times greater than the equivalents in the USA or UK. This is clear evidence for the power of sponsorship in the host nation, where consumers are typically being exposed to the highest levels of marketing and are seeing the greatest concentration of messages and branding from the official sponsors. The fact that Brazil stayed in the tournament for the longest period of time is another contributor: audiences and engagement levels remained strong in Brazil throughout the whole competition, whereas interest among American and UK viewers dropped off considerably after their national sides were eliminated (only returning to a level approaching the group-stage high for the Argentina vs Germany final).

Predictably, the gaps between Brazil and the other nations are most pronounced for Oi – Brazil’s largest telecoms company – which was identified by 52% in the host nation, 12% in the US and just 6% in the UK. Nevertheless, the same pattern is in evidence for all other brands too: Brazilians were twice as likely to select Adidas or Sony as official sponsors and were three times more likely to correctly identify Hyundai. 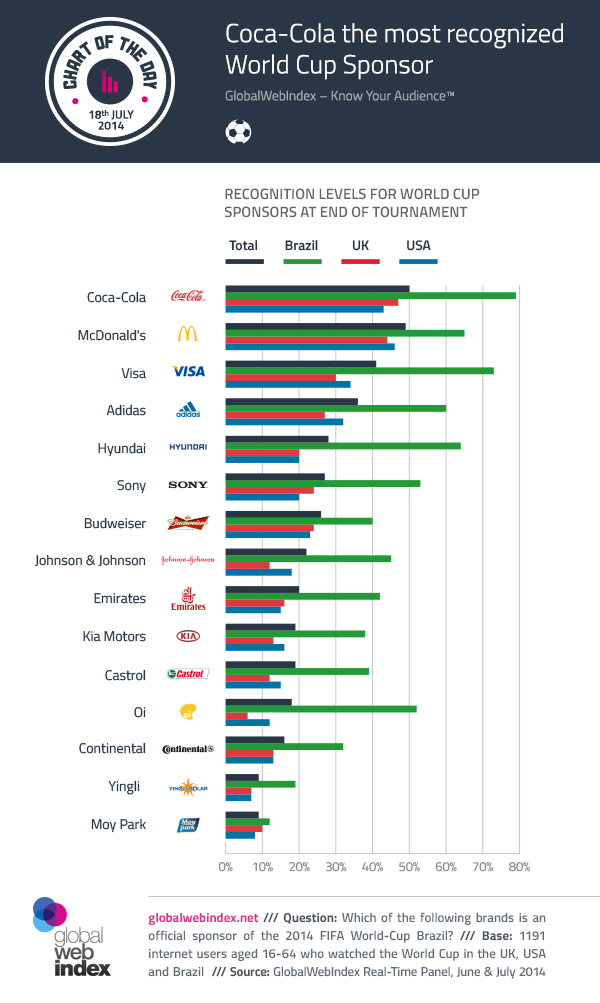