World Cup Sponsor Recognition: Up in Brazil, Down in UK

At the start and end of the World Cup, GlobalWebIndex surveyed viewers in Brazil, the UK and USA to test their recognition levels for the official partners of the tournament.

As our post today shows, overall awareness – as well as changes over time – varied significantly between countries.

In Brazil, for example, almost every single partner brand enjoyed an increase in awareness. The biggest boosts came for McDonald’s (in part due to its heavily localized Gol campaign) and Brazilian telecoms company Oi (+20% each). Following closely behind were Sony (+15%) and Castrol (+14%) but virtually all sponsor brands saw an uplift of close to 10% or more. This is clear evidence for the power of advertising in the host nation.

In the UK, though, quite different trends were to be seen. Here, most official sponsors saw relatively little change; the majority recorded small increases or decreases of around 1 or 2 percentage points, but awareness was largely comparable to at the start of the tournament. And, perhaps most strikingly, Adidas and Coca-Cola both saw declines of nearly 20%.

We explore the many reasons for this in our World Cup Sponsor Recognition Levels trend (download a copy here) but the impact of football-themed ambush marketing by brands like Nike is a major contributor. Outside of the host nation, audiences were much more likely to be confused by the clutter of football-focused advertising from both official partners and competitors alike. 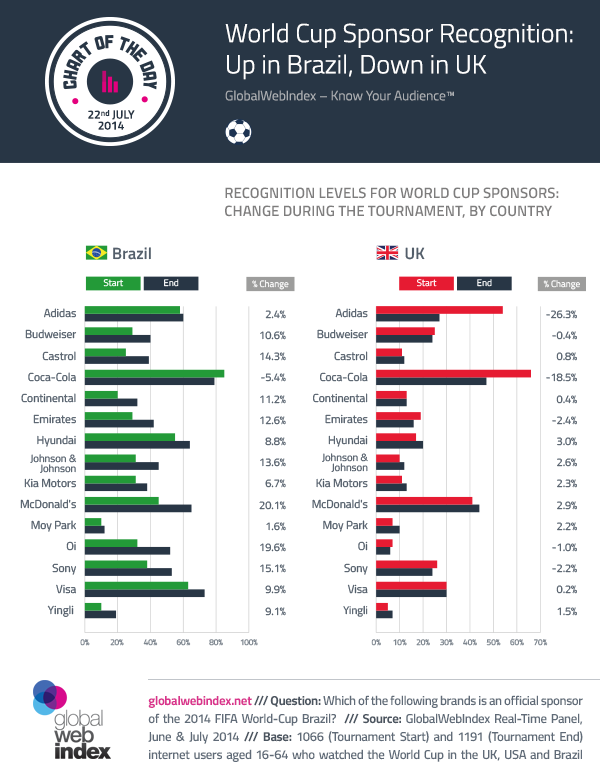