To mark the release of our second World Cup trend – looking at Viewing Behaviors throughout the tournament (download a copy here) – today we examine where people were as they watched games.

Across all matches and countries, the home was the overwhelmingly favorite viewing location. If we take the US and England group games as examples, between 75% and 85% of England viewers were tuning in from their own home, with the figures for the US matches ranging from two thirds to three quarters.

Naturally, the time of day at which games were played had an obvious impact here. For England, the late-night screening of the first Italy match resulted in the highest in-home viewing figures, whereas the Uruguay fixture during the day saw an uptick in “social” viewing at a friend’s house. By the time England’s fate had been sealed, in-home viewing increased again for the Costa Rica match.

In the US, the time of the Germany fixture (airing during the working day in America) saw the in-home figures drop – with a corresponding rise in those saying they tuned in from work. But Head Coach Jürgen Klinsmann’s plea to employers to let their workforces watch the match also had an impact, with this fixture scoring the highest rates for watching in a pub or bar (in many cases, along with colleagues).

In Brazil, meanwhile, any game featuring the home side proved to be a highly social event. Viewers were most likely to be at a friend’s house for a Brazil game but least likely to do this for any match featuring Argentina (where the in-home viewing figures typically peaked). Clearly, then, Brazilians liked being social when their own team was playing, but were not quite so keen on this when their biggest rivals took to the pitch. 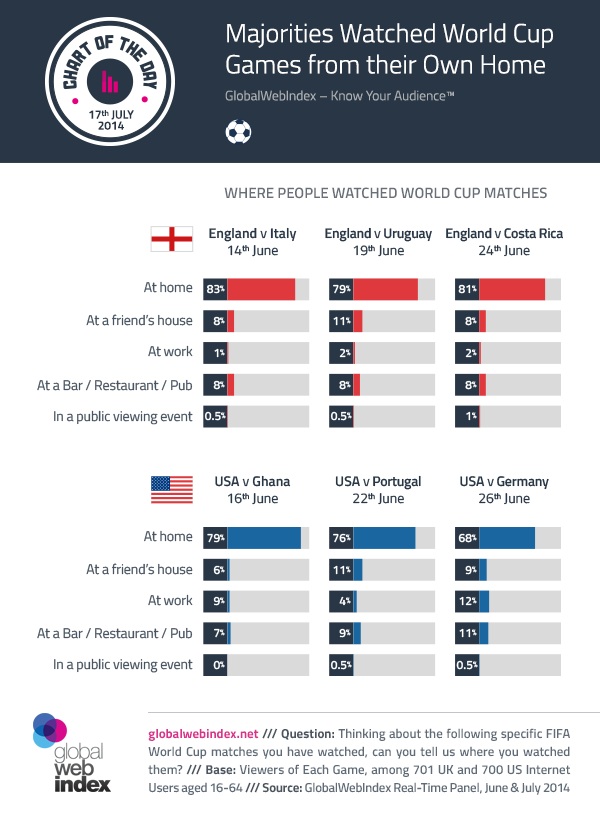