1 in 5 Consumers are Taking a Digital Detox

It’s something of a cliché to start a thought piece by pointing out that today’s consumers are more digitally connected than ever, but it’s a cliché for a reason.

The internet had existed for 20 years as a cultural and commercial phenomenon before it became part of everyday life one for most people – but when it happened, it happened quickly.

As mentioned in last week’s post, there’s a reluctance and resistance to being constantly connected.

One third of consumers in the UK and U.S. have expressed their concerns over the impact their smartphone has on their wellbeing.

But how are people acting on these concerns?

7 in 10 have tried to moderate their digital consumption in some way.

We divided our audience into “Digital Detoxers,” who’ve been on a full digital detox, either while traveling or for any extended time, and “Digital Dieters” who’ve taken steps to cut down their time spent online, such as restricting usage around bedtime, and finally the “Digitally Comfortable”, who haven’t felt the need. 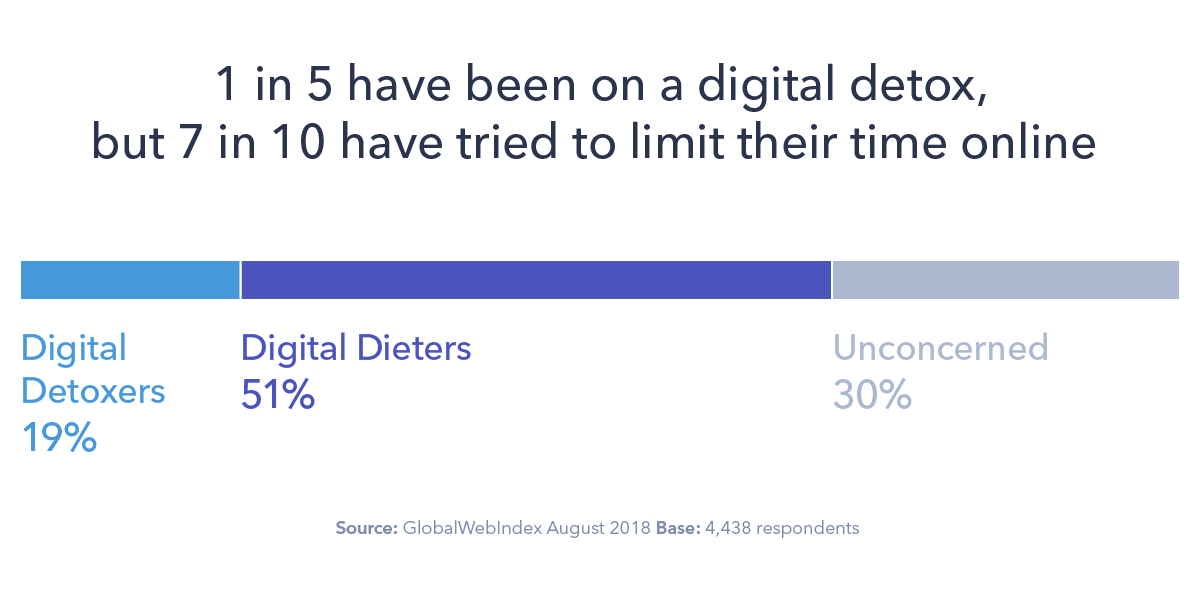 Cutting back, not cutting out

The ‘digital detox’ is nothing new, with some of the earliest press mentions going as far back as 10 years.

Still, those who want to cut back but don’t want to commit to a full detox regimen outnumber devoted digital detoxers five to two.

So, if they aren’t cutting it out completely, how are they managing their digital consumption?

Looking at those who do opt for a full digital detox, we found over-representations of 25-34 year-olds, who accounted for 33% of the sample, as well as men and people with postgraduate degrees.

They skew highly in other measures of socioeconomic status, like income and professional seniority, too.

From our analysis, a typical Digital Detoxer profile is that of a 30-year old man with a postgraduate degree, in a full-time managerial position.

Youth, higher socioeconomic status, and education are all associated with this trend.

Low-tech solutions for a tech-powered behavior

Nevertheless, our survey respondents were less keen on technical solutions to their tech problems.

Just 8% had downloaded an app to limit or monitor their usage, 9% had switched off their internet, and 14% had deleted a social account or app.

Real-life relationships are what drive people away from phones

Digital detoxers and people who take more moderate means to limit their usage have the same priorities.

They want to spend more time with their families, take part in offline activities, and focus on their health. 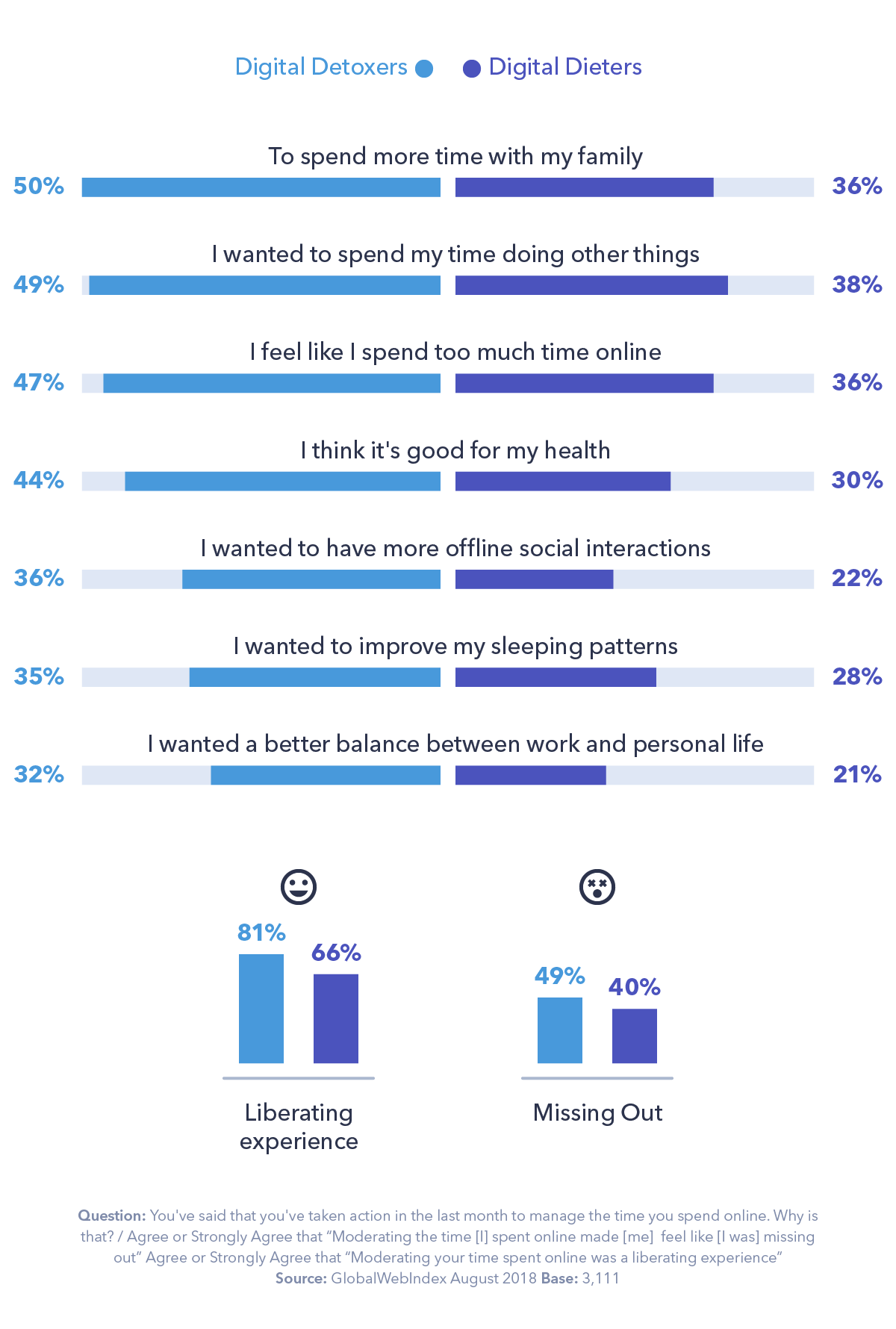 8 out of 10 detoxers found the experience liberating

Based on our research, the digital detox worked for 8 out of 10 of people who tried it. 2 out of 3 of those who chose to monitor their usage somehow were happy about it too, which suggests to us that the means are matching the needs.

“FOMO” (Fear of Missing Out) is often spoken of as one of the defining characteristics of the millennial experience.

It’s certainly an experience that many digital detoxers, millennial or otherwise, can recognize.

49% agree that “that moderating the time [I] spent online made [me] feel like [I] was missing out,” compared to 40% of those who simply limit their consumption.

What the future holds for brands

Out of our non-detoxer cohort, some 45% said they might consider taking some measures to monitor the amount of time they spend online.

There’s no crisis of faith in the mobile phone, but less than 1 in 5 would consider a low-tech solution – switching their phones off for more than a few hours.

Successful social media platforms have managed to dispel these notions to a large extent, not by cutting people off from family, but connecting them.

Apps, brands and platforms can do more to integrate with family and connect people, rather than urge them to feel disconnected and in need of a digital detox.