Two years ago, Dolly Parton kickstarted a viral meme. The singer put up four pictures of herself in various get-ups, comparing the different ways people act on LinkedIn, Facebook, Instagram, and Tinder.

Soon, other celebrities joined in and started poking fun at their own social media personalities.

And the meme’s funny because it’s true. When most of us make a post, we have a platform’s unwritten rules in mind. If you started publishing lunch selfies on LinkedIn, some of your network might raise an eyebrow or hit unfollow.

Being able to read the room is the aim of the game for brands and marketers. While an atmosphere can be hard to pinpoint, our February 2022 research helps us map out the mood on today’s top social platforms.

Why it’s important to have data on audience expectations.

The social media space is always changing, and some feel that the leading giants are all starting to look the same.

It’s true there’s a lot of crossover between audiences and many platforms have similar features, but people open each app with a specific experience in mind.

So, it’s not just small differences in formats or character limits that marketers need to bear in mind; it’s also the vibe, which is very dynamic and fluid. Each app’s unique culture is why social media marketing shouldn’t be a copy-paste job, and why up-to-date data on this topic is invaluable.

In this blog, we call out the main things to know about some of today’s most talked about audiences to help brands tailor their content more effectively.

On TikTok, humor and creativity are valued most.

Most TikTok users are on the same page when it comes to wanting funny content, and compared to other social media users, they’re 38% more likely to say they want brands to be funny. Marketers hoping to resonate with as many users as possible will increase their chances by prioritizing humor when planning content.

Also, while these qualities might seem to clash at first, TikTokers stand out for wanting posts to be both exciting and relaxing.

Businesses can tick both boxes by being bold and surprising, while silly and unpolished at the same time – as users clearly see the app as a safe space to be goofy and impulsive. They do value inspirational messages more than most, but they don’t want their motivators to take themselves too seriously.

It’s important to be likeable too. ‘Personable’ is fourth on this group’s wishlist, which is the highest position it reaches across all the platforms included in our research.

Duolingo’s TikTok is a great model to follow. It shows people in settings like nightclubs squeezing in lessons to make sure they don’t lose their streak, which is hilarious, encouraging, and relatable to anyone who uses the app. And its point-of-view posts are witty and self-deprecating, which makes Duo the owl come across as personable to his young audience.

Microblogging sites like Twitter and Reddit tend to be the most close-knit, which means the consequences of not sticking to etiquette are often greater: Tweeters are 35% more likely to have unliked or unfollowed a brand in the last month.

Twitter has a strong cultural association with humor. But actually, Tweeters are much less bothered about content being funny, which features fifth on their overall preference sheet. Plus, Twitter and LinkedIn users are the only audiences that prioritize being engaged over being amused.

Content expert Blake Emal checked out hundreds of viral tweets and found that those opening a conversation or putting a new idea forward did particularly well.

Funny content can be effective, but it seems like hot takes are generally more eye-catching than humor.

Even though Tweeters most want information on the app, ‘trendy’ and ‘community-driven’ are two qualities that stick out when making platform comparisons. This suggests they want a conversation, not a monologue.

More Tweeters want brands to listen to customers than help improve their knowledge (51% vs 38%).

Companies need to stay on top of what’s being talked about, and adding their own perspective to a retweet is an easy way to contribute to a topic that users have already marked as relevant.

Many also want this space to be welcoming. Inclusivity is particularly important to Tweeters, and 1 in 4 want material that offers this. Businesses should aim to keep text friendly and simple if they want to attract the right kind of attention.

YouTubers have the hots for helpful messages.

Despite YouTube and Twitter’s layout being poles apart, both offer information in one form or another. In fact, ‘informative’ is the most in-demand quality among YouTubers, and this kind of content is very much a staple on the app.

That being said, an appetite for helpful advice is what most sets YouTubers’ apart. Many use the platform for answers to their daily problems, or “life hacks”.

2 in 3 YouTubers say learning new skills is important to them, and 36% want brands to help them do this.

With this work ethic in mind, it’s not surprising that they value inspiration more than the average social media user. Videos discussing “What I eat in a day”, workout routines, and beauty tips are hugely popular on the site. And they all offer a window into how successful people achieve their lifestyle in a step-by-step, how-to format.

This is something brands can mimic by getting influencers to show how their products elevate everyday routines, making sure vlogs contain motivational snippets, and hosting Q&As.

While goal-oriented videos are in favor, it helps when they have a feel-good angle to them, as slightly more of this audience use the app to relax than to be inspired.

A quarter of Gen Z YouTubers say, when thinking about social issues, societies should prioritize body positivity; and half of users making a New Year’s resolution this year are aiming to practice more self-care. So, content should aim to be open about personal challenges, as well as show what’s worked for the speaker.

Facebook’s been around for a long time, and a lot of us might feel like we know everything there is to know about it. But its vibe has and will continue to change.

Like YouTube, Facebook handles a broad range of content types, and its user expectations are quite similar to that of other platforms; Facebookers would prefer the mood to be light-hearted, and they value information and creativity. But these traits aren’t what make it distinct.

Community-driven is lower down the list, and probably isn’t the first adjective we think of when describing content on Facebook. Though, it’s one many users want to see in action.

Our core research shows good, consistent levels of engagement with Facebook Groups across all generations, and this feature may be an untapped resource for brands. Also, most of these online circles are centered around a set location or interest, allowing companies to reach specific audiences.

Facebook users are the least bothered about content being inclusive, which could reflect the intimate nature of some of these groups. Overall, it seems the app’s becoming less about the Feed (with 43.2% of users finding its content less relevant), and more about subcultures.

Like Facebook, Instagram’s vibe has changed over time. Five years ago, Instagram was all about aspirational content. But according to its CEO, it’s no longer a photo-sharing app and it’s leaning much more on entertainment.

This priority shift has surely influenced user preferences – given ‘funny’ is currently the most in-demand quality among Instagrammers. As we’ve written about elsewhere, the pandemic increased the amount of ‘authentic’ sharing on social media, and it means users look for more relatable content on certain apps.

Authentic, personable content is a trend in itself; and Instagrammers care much more about posts being in fashion. They actually care more about content being trendy than relevant, and it’s easy to understand why.

They’re much more likely to follow meme accounts, to watch streaming services daily, and to be interested in celebrity news. Users are on top of popular culture, and as a result, they’re 23% more likely to want brands to be trendy or cool.

Dunkin Donuts was one of many brands to take part in Dolly Parton’s challenge back in 2020, and more recently, ASOS created looks on Instagram inspired by popular Netflix series like Bridgerton. On the aesthetics side of things, unedited photo dumps, in-app fonts, and blurred shots are all in style right now.

Brands hoping to strike a chord with these trend-followers will likely benefit from sprinkling this kind of content throughout their profile.

Today, brands need to be able to tell their story in multiple ways, which they can only do once they’ve learnt what works where.

There are quite a few natural overlaps between platforms. For example, funny and relaxing content are hallmarks of Facebook, TikTok, and Instagram’s audiences, which makes the apps good candidates for cross-posting.

Our research is just a friendly reminder to make those all-important tweaks – as sometimes it’s less about what you’ve got, and more about how you post it. 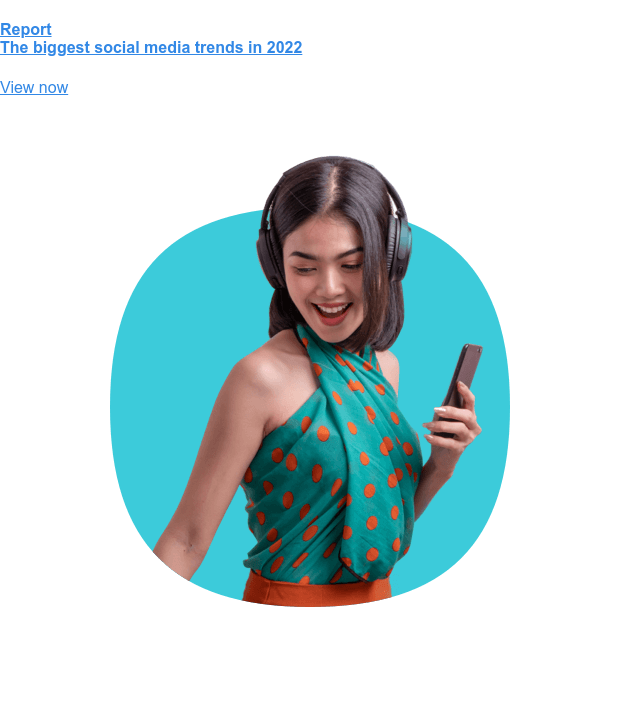