As the world gears up for a lengthy quarantine in the wake of the coronavirus pandemic, our relationship with technology is more important than ever before.

Since the outbreak began, quarantined internet users have been turning to digital communication as they adapt to an unprecedented change in their way of life.

In addition, we look at the behaviors of internet users regarding various devices and how quarantine is likely to affect these trends in the future, using our latest research into the impact of COVID-19 on consumers across 13 markets.

Get the latest insights into the consumer impact of the coronavirus outbreak on our research hub. To analyze the data in more detail, access it for free in our platform.

1. PCs still have their place.

In 2019, we noted that the mobile tipping point – a stage we’ve been eyeing for some years now – had finally been surpassed, with time spent on mobiles 10 minutes ahead of PCs/laptops, suggesting this gap is only going to keep widening.

But though PC/laptop ownership has been in steady decline since 2015, these devices aren’t irrelevant just yet.

Mobile-only strategies shouldn’t be the default at the expense of other devices, given global users still spend 3 hours and 15 minutes on PC/laptops.

Ownership of PCs and laptops is still just shy of 7 in 10 for all internet users, with highs of 89% in Switzerland and lows of 28% in Morocco.

For older internet users – those aged 55-64 – desktops are especially important, as these consumers spend an hour and 20 minutes more on these devices than on smartphones.

Similarly, regions where PCs and laptops were introduced later are still using the device more heavily compared to their early-adopter counterparts. Internet users in LatAm, for example, spend around 4 hours and 20 minutes a day on desktops, an hour more than those in Europe – who are still PC-first.

It’s important to note, that in regions with early PC/laptop adoption, internet penetration rates are higher – and their internet users older.

As such, markets where PCs haven’t been established for as long, tend to have a younger online population, who spend more time online in general compared to their older counterparts.

But with many confined to their homes, how is the pandemic affecting engagement with these devices?

As part of our ongoing coronavirus research, we asked respondents which devices they’re spending more time using since staying at home.

Smartphones have seen a meteoric rise in usage, with 75% of those who can’t leave their homes saying they use their mobiles more – rising to 82% for Gen Zs.

Even in a largely stationery environment, smartphones are still the device of choice.

Despite over 3 in 4 of those unable to leave their home reporting using their smartphones more, larger screen devices have also proven invaluable.

Over half are using PC/desktops more, and 1 in 3 say they’re turning to their laptops more – particularly in North America, where smartphone usage has increased for 38% of internet users.

As many as 45% of confined individuals are spending more time using laptops, and 34% on desktops. Even more surprising is Gen Zs’ part in the development of this trend – with 54% spending more time on their laptops since the start of the outbreak.

Though this is likely driven by an increase in watching films/TV shows or news coverage (the latter of which has seen significantly more viewership by 40% of quarantined respondents) a rise in remote working is likely to be a factor here too.

Though little over 1 in 10 internet users own a smartwatch/wrist device, they’re climbing in popularity.

Still a relatively young product category, and with a projected value exceeding $31 billion in 2025, wearables are making their impact, though ownership of the devices is still concentrated among affluent early adopters.

Owners of either smartwatches or smart wristbands are 33% more likely to be found within the top 25% of earners.

While the wearables market initially struggled to compete with the variety of features found on smartphones, increased investment in these devices is giving them the chance to replicate, and even someday replace, mobiles.

Regionally, APAC shows the highest prevalence for smartwatch/smart wristband ownership, with 1 in 5 internet users here owning either device. This is driven particularly by high adoption in Singapore and Hong Kong, where the most wearable owners can be found – 29% and 28%, respectively.

In APAC, the term “smartwatch” encompasses a range of devices, some of which retail for as little as $20, meaning greater affluence isn’t necessary to own either device.

On the contrary, products with a typically higher price point – such as the Fitbit, Apple Watch, and Samsung’s Galaxy Watch – are the current leading brands for smartwatch/smart wristband owners in the UK and U.S.

Presently, the Apple Watch proves the most popular in both markets observed (56% of smartwatch/wrist owners here own one), and especially the U.S., where 37% of this audience own an Apple branded smartwatch.

Apple’s product continues to see great success in the UK and U.S., having climbed 10 percentage points from 25% to 35% among this audience since 2015.

Meanwhile, Fitbit, owned by just 4% of smartwatch/smart wristband owners, is likely to see growth after its recent acquisition by Google. The $2.1 billion deal marks a turning point in Google’s wearable device range, given its Wear OS smartwatch had difficulty competing against rival brands.

3. The smart home market is growing.

Despite the smart home industry being expected to value $174 billion by 2025, the products themselves are taking off slowly, with global adoption currently at 11% of internet users.

Again, those within higher income segments are more likely to be in possession of these devices – those in the top 25% for income are 35% more likely to own a smart home product than average.

Globally, the UK represents the top market for smart product ownership, with 19% of internet users here in possession of a smart home device, closely followed by the U.S. at 18% and Canada with 16%.

In a custom study run in July 2019, we found that 66% of internet users in the U.S. and UK would consider purchasing a smart home product in the next year.

For smart home product owners, the most popular devices are smart speakers (51%). The instantaneous Q&A nature of these smart assistant devices has led users to personalize their AI functionality, such as adding an optional celebrity voice to each individual device.

In certain regions, reliance on these devices has increased during the pandemic. Smart speakers have felt the effects of COVID-19 too, with 10% of confined individuals saying they’re using these devices more.

Interestingly, older internet users are more inclined to own these smart speakers than their younger counterparts – 58% of those aged 55-64 own a smart speaker compared to 48% of 16-24s.

A possible reason for speaker popularity here is music-streaming services, a prominent feature on smart speakers.

For example, in 2017, internet users aged 55-64 spent 22 minutes a day on music-streaming services, having risen to 38 minutes per day as of 2019 – and 57 minutes for smart speaker owners in this demographic.

Compared to TV and news, music-streaming providers have ground to make up in bringing users onboard, as a third of internet users worldwide don’t use music-streaming services at all.

The general ease-of-use smart speakers benefit from may also help in converting late adopters (most of whom are 45-64) to new ways of listening.

In the UK and the U.S., 74% of those planning to purchase an entertainment product are considering buying a smart TV in the next year.

While these devices have the advantage of accommodating both traditional and online TV viewing habits, they also cooperate with other devices.

Through smart TVs, users can stream smartphone content via mirroring/casting, which 4 in 10 smart TV owners have done in the past month.

4. Gaming is gearing up for a busy year.

With 82% of internet users gaming on any device, the activity is alive and well despite a decline (from 89%) since 2015.

As gaming migrates to other devices, this decline could be a result of smartphones and tablets’ growth in popularity as gaming devices – the former of which has become the most prominent gaming device among internet users since 2015.

Console decline may be attributed to Sony and Microsoft’s looming 9th generation consoles, with each company’s gaming devices, PS4 and Xbox One respectively, having been in circulation for as long as seven years.

As the 8th generation of consoles enter their final year as brand flagships, attention is on Sony and Microsoft to deliver the much-anticipated 9th generation consoles; the enigmatic PlayStation 5 and Xbox Series X, respectively.

For console owning gamers, the PS4 is the most commonly owned gaming console. Just under half own this device, and Sony will hope to retain this success on release of the PS5 in late 2020.

PS4’s primary competitor, the Xbox One, sees overall ownership drop to just over 1 in 5 of this audience, while little over 1 in 4 are interested in purchasing the latest Xbox following its release.

However, the release of a new console gives developers the opportunity to reignite interest and garner a new following, as each minor update made is capable of significantly impacting gamers’ purchase consideration.

Of those who say they cannot leave their homes, 1 in 5 say they’ll be spending significantly more time playing video games.

With much of the population becoming accustomed to a period of quarantine, gaming is certain to remain a popular form of entertainment.

As time will tell, consumers devoting more time to the activity is likely to benefit the industry and generate further interest in upcoming consoles.

Device use after COVID-19

There’s great uncertainty surrounding when the pandemic will come to an end, with quarantines lasting an indefinite amount of time.

During this period, consumption habits are shifting as consumers become better acquainted with different types of media.

Right now, all devices, whether used for communication or entertainment purposes, are important to those unable to leave their homes. We can expect to see high levels of streaming service usage, stretching from film/TV to online gaming, in the coming weeks.

There’s already evidence of this happening, with various streaming giants reducing the quality of their streams in order to cope with the additional strain on their services.

How long this crisis will last is anyone’s guess, but as quarantines begin to lift, the habits developed in the next few weeks are unlikely to break quickly. As a result, users’ relationships with their devices could be permanently altered, with the streaming and gaming industries likely to benefit in the long run. 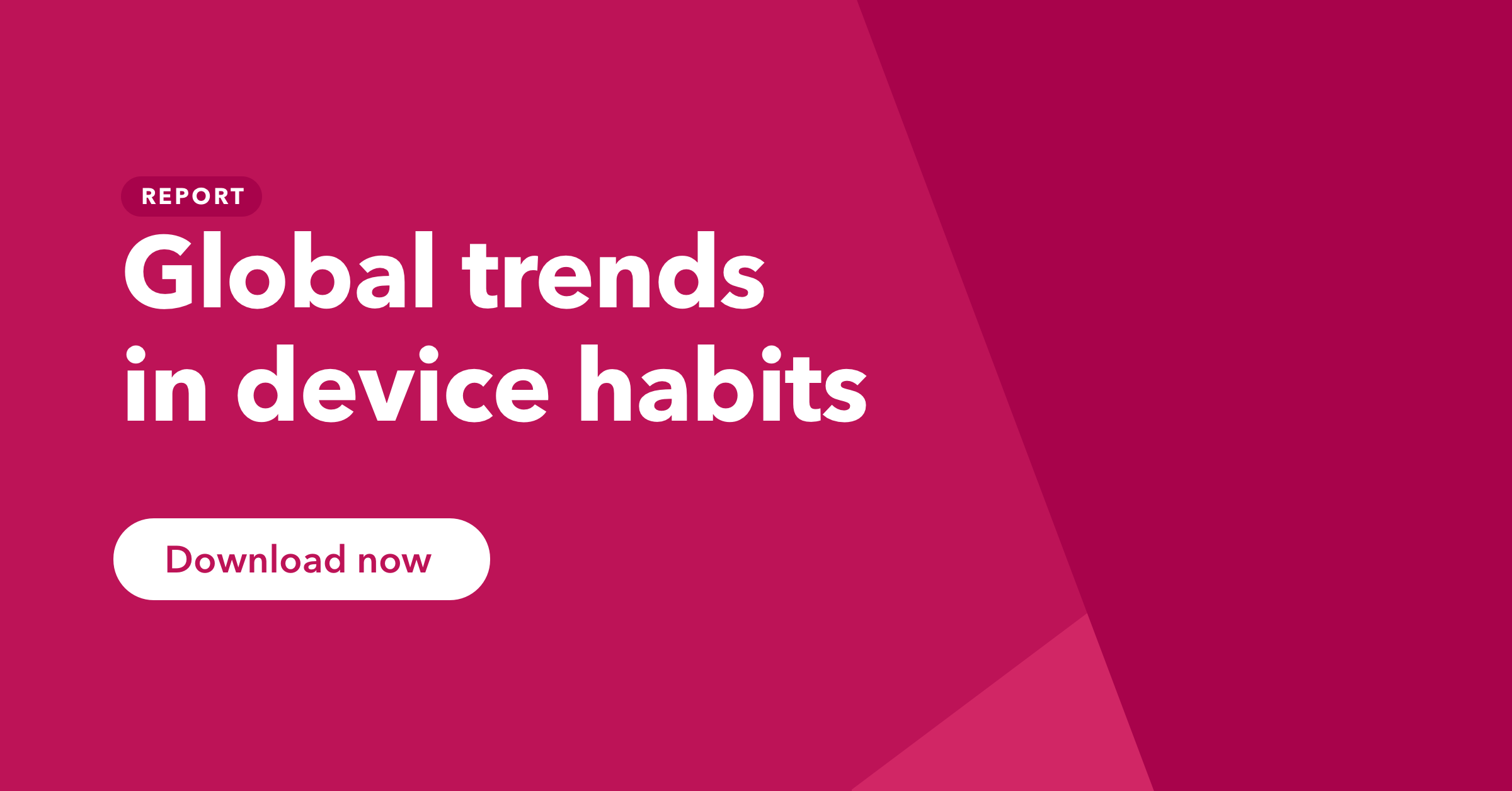