How ‘Social’ is Social Media?

The roots of the social media phenomenon as a societal paradigm are fascinating.

In the late 90s, the dispersion of the internet and home PCs became the new means of communication, and provided inspiration for experimentation with how we as humans connect and express ourselves.

The hype was immense – as today’s older millennials will remember – basic messaging boards and forums became interactive networks where internet users gained a voice of their own.

By the early 2000s, it was all about the social connections.

Very few argue that not just friendships, but family ties strengthened too through social networks.

Pictures, status updates, videos – and today, the time-sensitive stories and personal lifecasting are all at the heart of how social media serves its users.

Social media has become the melting pot of all communications from peer-to-peer, to B2C and B2B… The endless variety of channels, brand communications and marketing on offer inevitably led to an over-saturated social media landscape.

To find out what ‘social’ really means in today’s social media landscape, we conducted a special study asking are internet users still enthusiastic about the social element of the networks, or has ‘social’ started to mean different things to the users as the concept matures and evolves?

What role does social media play in daily life?

In our study, we analyzed the role social media plays in people’s day-to-day lives.

50% still use social media to stay in touch with friends and family, but a very close contender is the funny and entertaining content that make people turn to social networks (42%).

The UK leads for those who use social media when they’re bored or have time to fill at 43% and 39% respectively. Overall, 51% watched/read entertaining content, 48% clicked on a post to read a news article and 37% listened to/discovered music on social media. Over 1 in 4 also purchased a product or service via social media.

All of this shows how social media’s role is no longer merely social.

Users’ daily needs and functions are both defined and serviced by how social networks position their features.

Have social networks done themselves a disservice by innovating and expanding?

Without a doubt, social media has become a ‘sensory extension’ of consumers: we see, learn, buy, recommend and showcase ourselves and our interests on social networks.

But this also means users may be overwhelmed with social content and features, and try to ‘downsize’ to do only what comes naturally to them on these platforms rather than all of the above.

We asked social media users in the UK and U.S. if they’ve made a conscious effort in the last 12 months to reduce the time they spend on social media on a daily basis, and found out that the trend is very much prominent in both markets.

The U.S. is slightly ahead of the UK with 46% of the internet population saying they’ve decreased time spent on social networks versus 41% in the UK.

Age is an important and surprising factor, too. Generation Z and millennials are ahead in making a conscious effort to decrease time spent on social media, with 58% of each cohort admitting to have done so rather than the older age groups who are getting to know the networks at a slower pace in general. 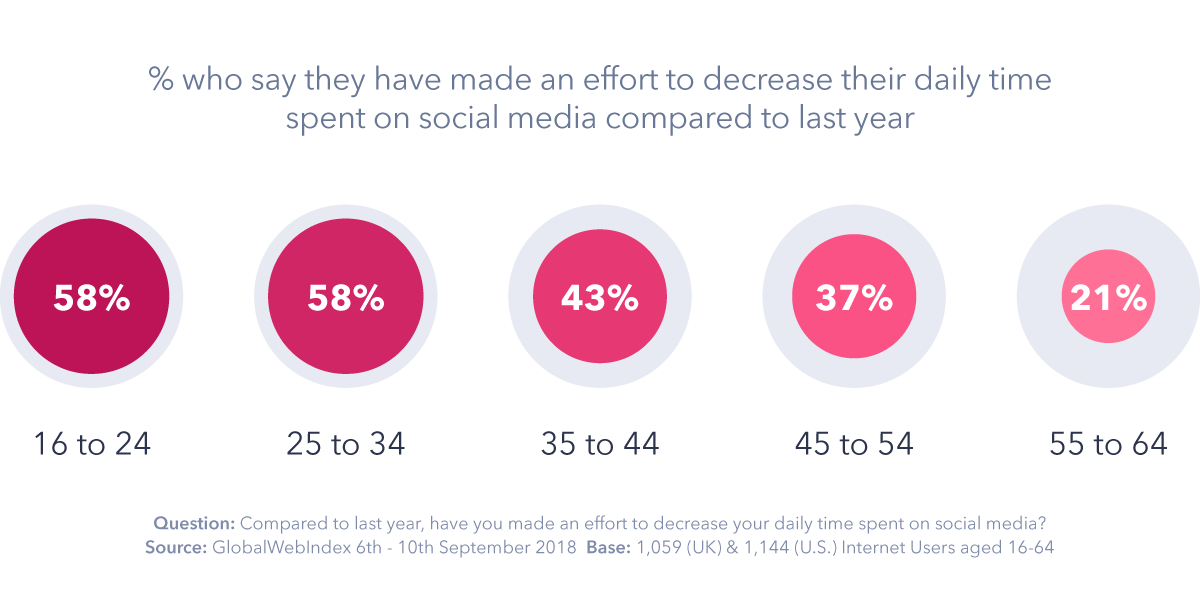 We’re also able to make associations between gender and the reduced time spent.

This reveals a shift in social media usage norms in general.

We also dug deeper into the social media account deactivation or closure behavior.

Our data shows that 32% of all users in the UK and U.S. say they have deactivated or closed a social media account in the past 12 months.

More men (37%) have closed or deactivated an account than women (25%) in both the UK and the U.S. A surprising finding was that account deactivators are avid social media users.

This indicates the potential of self-moderation having a role in the account deactivation trend in both markets. 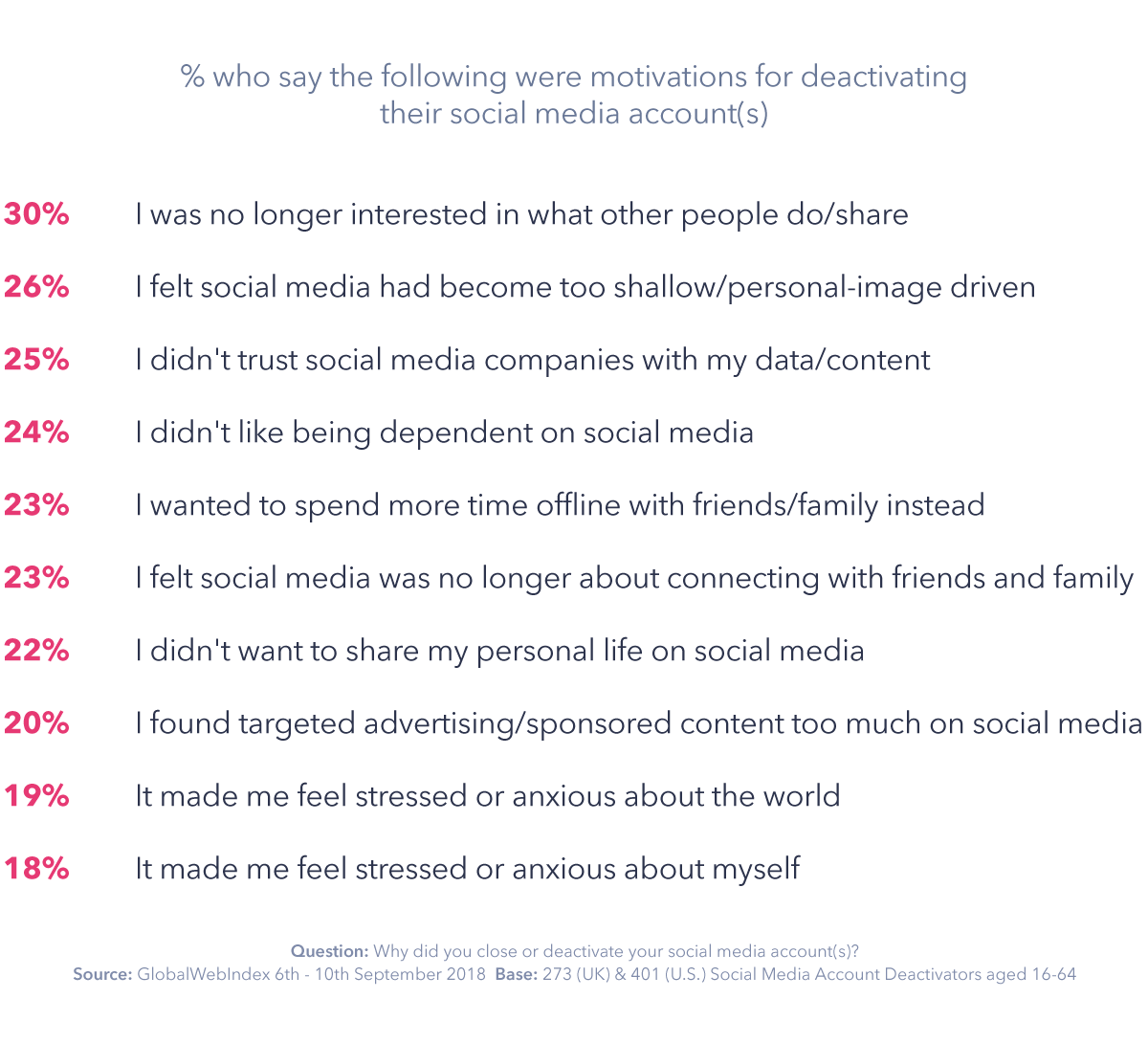 When we look at the top reasons for deactivating or closing an account, we see proof of the aforementioned ‘saturated’ landscape on social media, with 30% of users showing less interest in other people’s updates.

Perceptions around the type of content they see on social make an impact too.

Not too far behind is the fear of being ‘too dependent’ on social media and choosing to take action in order not to lessen this dependence at 24%.

2018 saw the tidal waves of GDPR regulations in Europe affecting brands’ communication strategies on a global level especially in the U.S., which triggered a shift in user perceptions of social networks in general.

In both markets, male social account deactivators seem more concerned than women about the way social media collects and stores their data.

We also know that women care more about spending time with family and just generally lost interest in what people are posting on social media, demonstrating a conscious shift to the ‘offline’ to connect.

What does the ‘social’ future hold?

The change in user behavior is a natural one and doesn’t signify the demise of social media.

We know that the activities and purposes are not disappearing, but rather becoming more sophisticated and diverse with the format and content innovations on various networks on offer.

So how are users comfortable using social media in light of what we know?

These are closely followed by motivations like buying/selling products (43%) and researching product ideas.

Brand and product research and interactions over-index for women (over 1.10 IDX), while community events and activism correlate to female interests too (1.25 IDX) at 41% of women have joined communities/groups they support on social media within the past month.

The entertainment hub of social media

Broadly speaking, social media as an ‘entertainment hub’ is a role that’s here to stay. Is this a bad thing?

Not necessarily – especially because it’s one of the elements social networks facilitated and utilized over the years.

Brand engagement still offers room for expansion and innovation, so companies still have time to cleverly blend entertainment with commerce, content consumption and advertising in general – or better – to redefine what entertainment can mean to the future social media user.

Yes, we’ve seen social media grow and evolve from simple networks to media to content hubs. Luckily, it’s still nimble enough for brands to make it their own and trailblaze the role they can play.