Many international TV channels have traditionally focused purely on affluent audiences when pitching to advertisers.

But while the channels continue to be highly effective at targeting these affluent audiences, our recent study with the International Television Research Group (InTV) shows there are millions of highly valuable consumers who fall outside the top income segment, and are yet to be marketed to.

In short, there’s a much broader pool of potentially untapped audiences that have been overlooked by advertisers.

The study, conducted among over 120,000 European internet users aged 16-64, shows that centering media planning and advertising around only the most affluent consumers is a limiting, and potentially outdated, strategy.

Who are these consumers?

Many of the characteristics that set affluent consumers apart also hold true for viewers of international TV, but prosperity isn’t the only thing that makes them different.

The research found this group has its own set of characteristics and attitudes, independent of income.

Comparing frequent viewers* of international TV channels with non-viewers across a wide range of data points, we explored everything from their self-perceptions and lifestyles to their device ownership and receptiveness to advertising.

Frequent viewers were revealed to be a very different audience to non-viewers, but wealth wasn’t the major driving force behind these differences.

When controlling for income by looking at frequent viewers both inside and outside the top 10% income group, we saw the same pattern repeated. That is, the frequency of viewership affected their behaviors more than their relative affluence.

Frequent viewers are different in their own right. Here’s how:

Frequent viewers of international TV channels are a driven audience who strive to be successful in their careers and life.

This holds true even after controlling for income: affluent frequent viewers are twice as likely as the most affluent non-viewers to fall within our ‘Aspirational’ segment –  encompassing those who think money is a good measure of success, who push themselves to be the best they can be in life, and who attach importance to gaining new skills and seizing opportunities.

One of the most telling findings in the study is that advertising receptiveness is associated with viewing frequency, rather than affluence.

Frequent viewers are twice as likely as non-viewers to buy the products they see advertised.

This pattern holds true regardless of income. 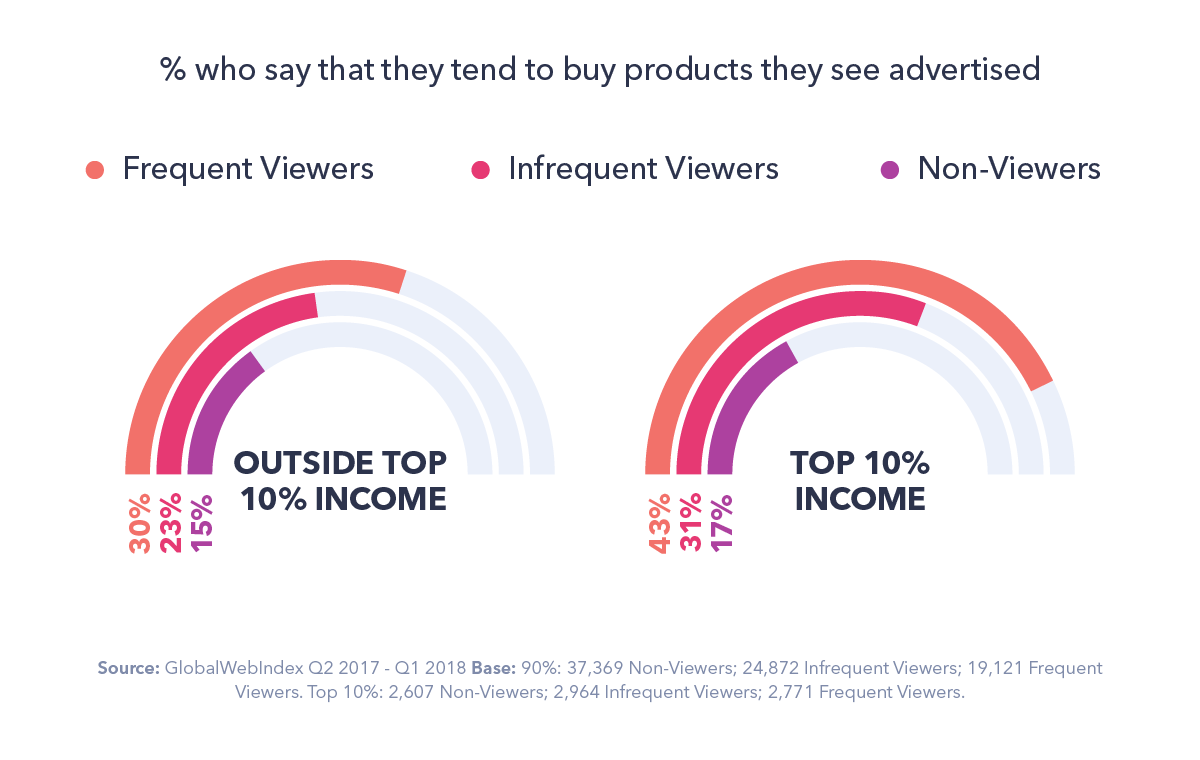 In fact, frequent viewers both inside and outside the affluent group are more likely to discover brands or products via all types of ads we track –  reaffirming the importance of looking beyond just affluence when media planning.

Just like the broader affluent audience, all frequent viewers of international TV channels are considerably more likely to value premium brands than non-viewers. 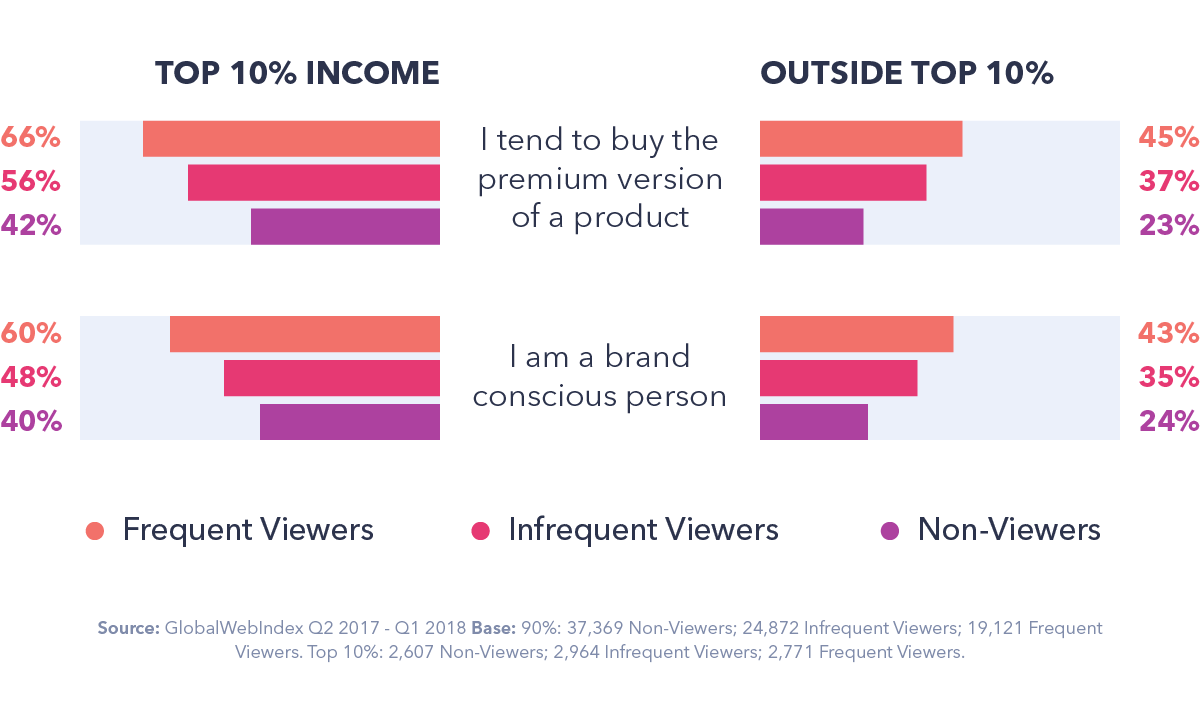 It’s logical that the wealthiest frequent viewers are ahead here – 60% say they’re brand conscious – but what’s telling is they’re also some distance ahead of the wealthiest non-viewers (on 40%).

The differences between the two audiences are especially pronounced in the UK (51% vs 29%).

This is in line with the finding that frequent viewers are an image-conscious audience who buy into brands that boost their social standing and help them feel respected by their peers. It’s for this reason they’re more likely to have the latest tech:

Frequent viewers have been quicker to adopt devices like smart TVs and smartwatches, both inside and outside that top 10% group.

18% of affluent frequent viewers have a smartwatch, for instance, compared to just 6% of the affluent non-viewers.

4. Frequent viewers are more engaged with all media – especially social.

It’s not just TV that’s important to frequent viewers. They’re more likely to be consuming all the types of media we track. Almost half spend more than two hours a day on social media, for example, compared to just a fifth of non-viewers.

This spells big opportunity to meet this audience across a variety of channels, especially social media which is seeing more and more developments around TV content and broadcasting.

Look beyond just the top income earners and there’s an attractive and premium audience waiting for advertisers.

Deep diving into this audience for the first time shows that the international TV industry has potentially undersold its audience. Beyond the top 10% of income earners exists a large and premium audience that could appeal to a much broader set of advertisers.

While affluent brands will remain key going forward, looking beyond this narrow lens of affluence will allow the industry to tap into these potentially lucrative audiences.

*Frequent viewers are defined as internet users aged 16-64 who watch any of the international TV channels at least twice a week. 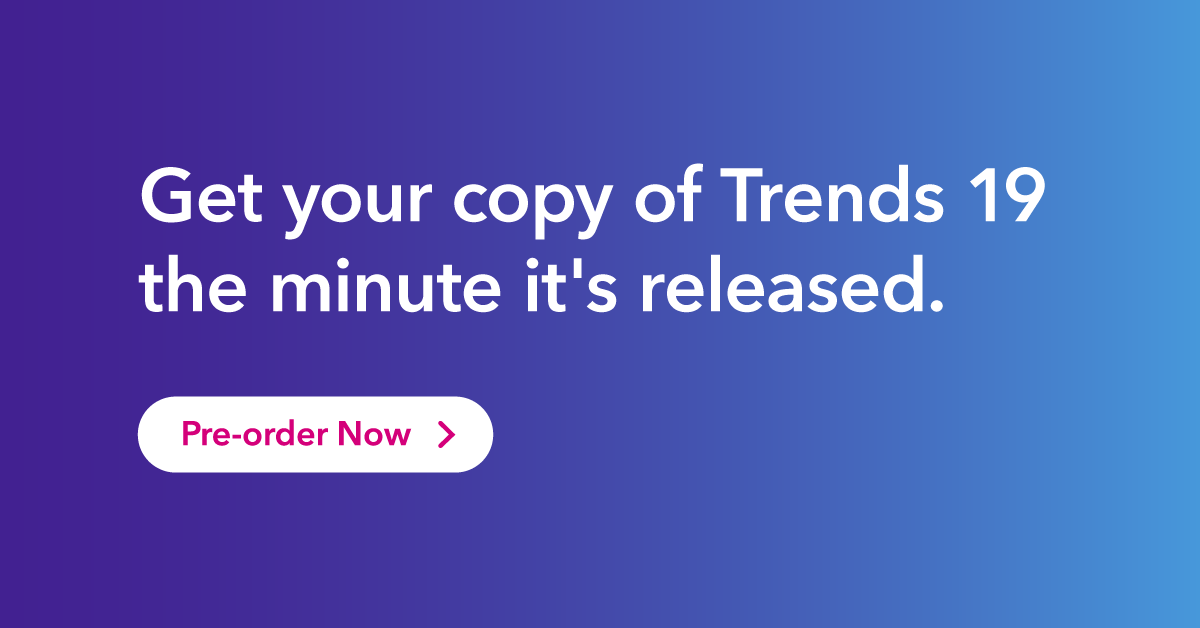