The next gen: getting to know kids’ relationship with video games

Video games can be a double-edged sword. Research still questions their impact on kids’ wellbeing and marketers should be mindful of the potential negative consequences they’re associated with by some, such as anxiety, addiction, and decreases in prosocial behavior.

That acknowledged, our data shows that since the pandemic, there’s been somewhat of a shift in attitudes to gaming.

Once perceived by some as a time-wasting distraction, many feel that games have been evolving into educational and social hubs.

During social isolation, gaming has become more than just a pastime and provided kids the much-needed peer connections.

While we don’t disregard the potential negative impact of high-frequency gaming on kids, here we aim to shed light on some of the positive sides of gaming and learn more about kids’ behaviors and attitudes directly from kids themselves.

Stay right where you are for the latest insights on how often kids play, their go-to devices, who they play with, what their favorite titles are, and the positive impact gaming can have on them.

Gaming is part and parcel of kids’ lives.

Gaming is the top interest of boys aged 8-15 out of a list of 30+ interests, beating things like movies, music, and TV shows.

Of course many adults assumed gaming was popular with kids, but this shows just how big it really is. The key takeaway is that gaming is a closely integrated, regular part of kids’ lives.

Just over 70% of gamers aged 8-15 say they play video games most days or every day. That holds true regardless of age or gender, with 64% of girls saying that gaming is a regular part of their routine.

When it comes to tech, games consoles and smartphones battle it out for the title of go-to device.

Looking at our Core data for adults in the same markets, we see a completely different device landscape. For them, smartphones are the winning device by quite some margin.

Even among younger Gen Zs a significant gap remains; 74% use smartphones for gaming compared to 46% who use consoles. For kids, this gap doesn’t exist.

Looking ahead, we see a couple of potential scenarios.

First, if consoles and mobiles are equally important to kids now, there’s a chance this’ll continue as they get older. As a result, consoles might not face an uphill battle against smartphones for market share as they do with adults today.

Second, access to smartphones grows with age, so it’s possible that smartphones will continue to be the go-to gaming device as kids enter adulthood.

Finally, there’s a strong chance the future of gaming will be shaped by cloud gaming strategies that sidestep the whole issue of device loyalty.

It’s a place for kids to learn and get creative.

Video games often faced criticism in the past either because kids spent too much time on them or because games themselves featured few if any educational or developmental features.

Although this view has softened in recent years, with the popularity of creation games like Minecraft and Roblox soaring, we should still be aware of the potential for  excessive gaming to have an adverse effect on kids’ wellbeing, and especially their physical activity.

Today Minecraft holds the coveted first place across all kids’ age groups by quite a distance.

Last year, Minecraft generated just over $400 million, with big increases in usage during the pandemic. A sandbox-style game that enables players to build worlds and fuel their imagination, it’s got the seal of approval from both parents and kids.

Nintendo is also dipping into game development with its Game Builder Garage, a new Switch game that enables kids and adults to develop games on the Switch platform.

Gaming, in many ways, is becoming a learning tool, with research in the UK finding evidence that video games can improve kids’ literacy skills, creativity, and empathy.

Camp EDMO in the U.S. uses games as teaching tools. As the camp’s executive director, Eduardo A. Caballero, puts it, “We work with platforms that allow kids to be creative, to have a personality, to have feelings – and they’re great tools for social and emotional learning”.

Netflix has also announced a big gaming push that’ll become part of their core subscription offering, and will likely be a key part of their strategy to improve family retention.

Ultimately, games that manage to include a strong creative and learning focus will continue to win over both kids and parents alike.

However, marketers and gaming platforms should be very careful in their messaging to kids and parents. Ultimately, the responsibility is in their hands to discourage excessive gameplay and be fully transparent about its consequences.

The social benefits of gaming are clear.

The pandemic arguably opened people’s eyes to the social benefits of gaming.

Many kids, unable to see their friends in person or go to school, felt a real sense of social deprivation. Gaming helped fill this gap.

Just over half of kid gamers also say they play with friends online, with many others also playing with siblings or parents.

In short, gaming isn’t just a way to connect with friends, it also has the potential to bring families together.

In our report, The gaming playbook, we showed how one of the fastest growing segments of gamers are older people, in the form of parents and grandparents.

Gaming is increasingly seen as “family time”, with many families playing together and learning from their children.

Kids share worries and anxieties, much like adults do. Research has found that video games have therapeutic benefits for military veterans, and it’s easy to see why.

Video games allow users to get lost in worlds outside their own, but crucially these are worlds they can control – a far cry from the uncertainty of real life.

Whether you’re building bridges or flower gardens in Animal Crossing, or creating games in Roblox, they’re an immersive and enjoyable distraction from the craziness of today.

The social aspect of gaming also extends into how kids discover video games in the first place.

When asked how they find out about new games, their top source is friends or family members at 57% – way ahead of other sources like seeing ads online or social media.

This not only shows that young gamers are vocal (much like their older counterparts), but also how powerful word-of-mouth is in the gaming purchase journey. If a kid’s friend raves about a game they’re playing, chances are the same kid will want to get in on the action.

The debate around whether video games are good or bad for kids will probably always be around in some form.

While our data shows that gaming is a vital part of kids’ routines, and to an extent, a positive one too, marketers and gaming providers are still responsible for making sure their campaigns and messaging are transparent about its downsides as well. 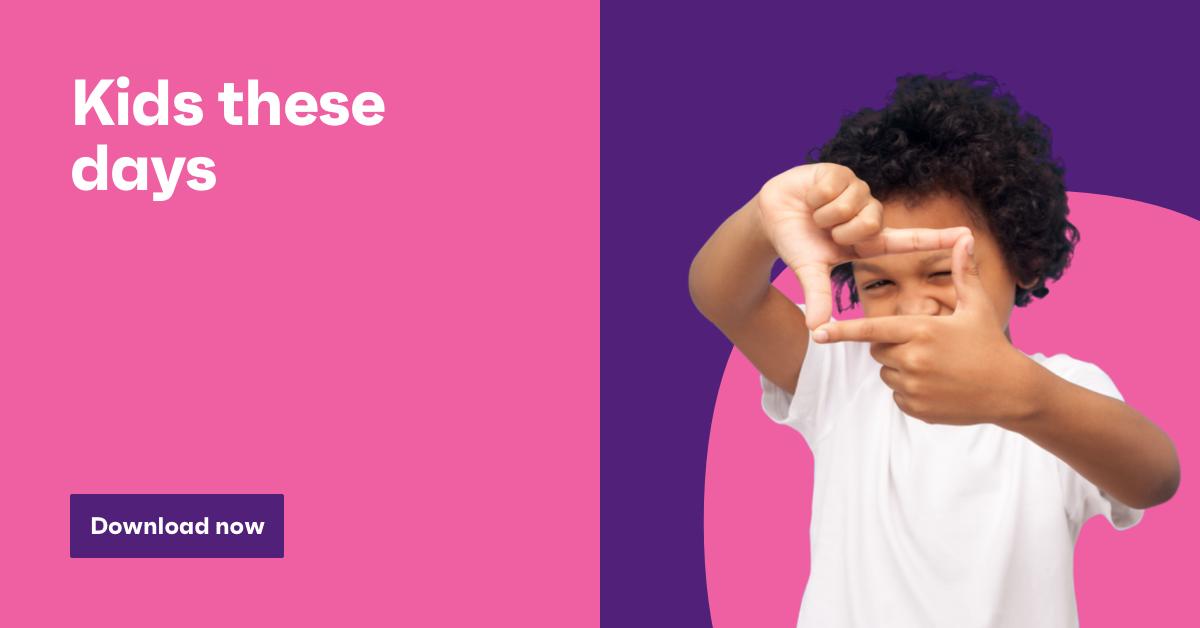