The term ‘millennials’ is often misused, mistaken to many as a meaningless buzzword.

But its true meaning is far from empty. As the working title for those born between 1981 and 1996, ‘millennials’ is a term referring to a diverse group with unique, defining characteristics.

Many of these traits have been oversimplified, misinterpreted or are simply inaccurate.

Despite the fact ‘millennial’ is often seen as synonymous with fresh-faced youth, for example, the oldest millennials are in their mid-thirties and settling into a new stage in their lives.

And our latest data reveals stark differences between older and younger millennials.

There are similar differences in employment status. 67% of older millennials are full-time workers compared to 55% of their younger counterparts.

To fully understand the nuances of the millennial generation, here we put to the test six commonly held beliefs about millennials and see whether they hold true for our 52,871 millennial respondents around the world.

1. Are they very cosmopolitan?

Yes. A quarter of millennials can be categorized as cosmopolitan: those who are interested in other countries, enjoy being surrounded by different ideas and lifestyles, and love to explore different foods and cultures.

Millennials are 12% more likely than the average internet user to be considered cosmopolitan, which speaks of a generation that enjoys feeling connected to a range of other cultures.

This is true regardless of millennial age, and is a trait that their younger counterparts – Gen Z (16-21-year-olds) – have inherited. Millennials have probably been at the forefront of a generational shift towards wanting and expecting more cultural variety in their lives, and marketing messages should always bear this in mind.

Three-quarters of millennials say it’s important to stay in touch with what’s going on in the world, and 1 in 2 regularly try foods from other countries.

Additionally, this cohort are 23% more likely than the average consumer to go on a medium/long-haul vacation abroad at least once every six months (22% do).

2. Are they financially illiterate?

Money is certainly important to millennials, with roughly 1 in 2 saying money is the best measure of success.

But this stereotype is largely untrue. We see a predictable effect of age on income, with Gen X (36-54 year-olds) and older millennials more likely to be in the top income bracket compared to younger millennials and Gen Z.

They are, however, generally more comfortable borrowing money, with 34% agreeing with this statement compared to 27% of Gen Zs. This seems to be more of an older millennial trait, who are 20% more likely to agree than average.

While millennials don’t mind borrowing money, they are also the most proactive generation in investing it, with 52% agreeing that they are doing so.

We do see some fairly major regional differences in financial attitudes. For example, while millennials in Latin America are the least comfortable borrowing money (22%), they’re some of the most proactive when it comes to investing it (52%).

Compare this to millennials in Europe, who dislike both borrowing (23%) and investing (32%) their hard-earned cash.

Millennials are also some of the most positive about the global economy; 50% say that they are, compared to 47% of Gen Zs and 44% of Gen Xs. Baby boomers, on the other hand, aren’t positive at all.

Only 3 in 10 agree with this statement, despite these 55-64-year-olds mostly living through times of economic prosperity.

3. Are they all health-conscious, fitness fanatics?

Millennials are certainly conscious of their health, but this isn’t an inherently ‘millennial’ trait.

There are very little generational differences when it comes to being conscious of, and looking after, their general appearance or image, although there are greater discrepancies in their purchasing behaviors.

Two-thirds of millennials say they try to buy natural, organic products, ranging from 70% in APAC to 49% in Europe and North America.

Similarly, 6 in 10 millennials would pay more for sustainable and eco-friendly products.

They’re also more likely than both Gen Z and Gen X to have purchased organic fruit and vegetables, or health foods, in the last month. And while a third say they eat fast food at least once a week, they’re much less likely than their older counterparts to drink alcohol on a weekly basis.

There definitely seems to be more of an appetite for health-conscious fast food options, as meat-free options continue to grow in the largest fast-food chains.

Regarding their exercise behaviors, 44% of millennials go to a gym on a weekly basis, and 57% go running in the same timeframe.

Younger millennials actually show the highest engagement with going to the gym; 16% say they go most days, making them 32% more likely to do so than the average internet user.

Millennials often get flak for being a lazy and entitled generation. Being the first consumers to fully embed themselves into life with social media, narcissism is an accusation often thrown their way.

Although 7 in 10 say they like to look after their appearance, this is a fairly consistent trait across all generations. Likewise, 47% of both millennials and Gen Z say they like to stand out from the crowd.

This does suggest millennials perhaps put more effort into how they’re perceived by others, but it’s a far cry from narcissism.

One in two millennials say there are too many ads on the internet, which is their most cited reason for using ad-blockers.

They also use ad-blocking software to avoid ads that are annoying and irrelevant (46%), or intrusive (44%).

Using ad-blockers to stop ads being personalized based on browsing histories is the least cited reason for millennials (23%).

While our data shows they’re not necessarily ‘anti-advertising’, their frustration with ad-overload means brands should target with highly-tailored, personalized and thoughtful advertising wherever feasible.

6. Are they less engaged with brands?

Our data suggests this stereotype is unfounded. While millennials might be avid ad-blockers, they can still be highly proactive with brands and branded messaging.

Out of all four generations, millennials are most likely to have (in the past month):

In fact, there are very few brand interactions where millennials aren’t some of the most engaged.

Baby Boomers are the most likely to read a brand’s newsletter/email, and Gen Zs show higher engagement for downloading a branded game.

Despite being a highly engaged group with brands, 6 in 10 millennials do say that they would rather spend their money on a unique experience than a status brand, with a similar proportion of Gen Z saying the same.

On top of this, 54% of this cohort say that price is more important than a brand name when buying a product.

So, while millennials are a great audience to have meaningful brand interactions with, the experience around that brand and the price of a product or service also have meaningful parts to play in their purchasing decisions.

While generational stereotypes might have a kernel of truth to them, they rarely tell the whole story.

Learning to appreciate inter-generational traits, as well as the ability to view generational stereotypes with a degree of skepticism, allows marketers to get to grips with an audience that has long-been misconstrued. 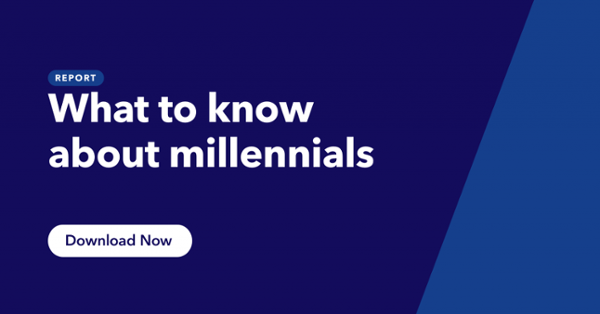