The UK’s telecoms regulator – Ofcom – recently released its annual report on the communications market, and the findings are clear. The surge in internet penetration, daily hours spent, and the number of ‘always-on’ consumers is climbing year-on-year.

More mobile connectivity is helping many people feel closer to those they care about, to find entertainment, and to keep up with news and current affairs, but change has come quickly, and with it, some concerns.

In surveys, people tend to mention a host of pet peeves – phones at the table, interruptions in social settings – which are minor on their own, but together point to a wider unease with the role of mobile and social media.

A sizeable minority of mobile phone users worry about the overall impact on their quality of life.

In a special survey we carried out on 2,300 UK and U.S. mobile phone users in August 2018, more than one in three respondents felt their mobile phone usage had a negative impact on their health and wellbeing. 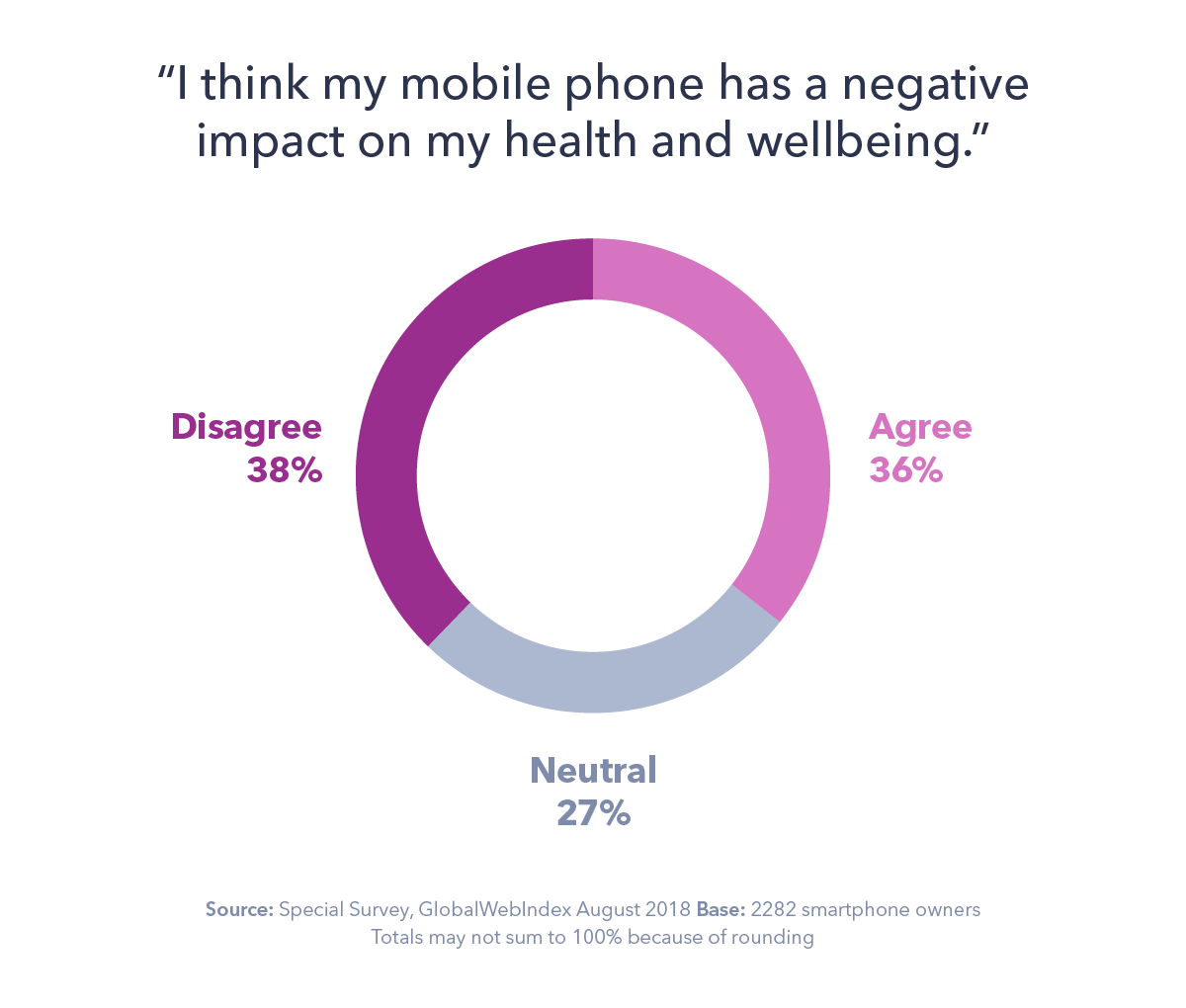 Concerned mobile phone users are slightly more likely to be male (52%), and include more younger people (57% under 35 years of age versus 34% for the less-concerned group). Women are among the majority of heavy phone users, but concern and contentment transcend demographics.

Our research shows there’s no unambiguous connection between usage and level of concern. We compared people who report checking their phone more than 10 times an hour (who made up 28% of our sample) with moderate users (the 32% who do so twice an hour or less) and found a roughly even three-way split. 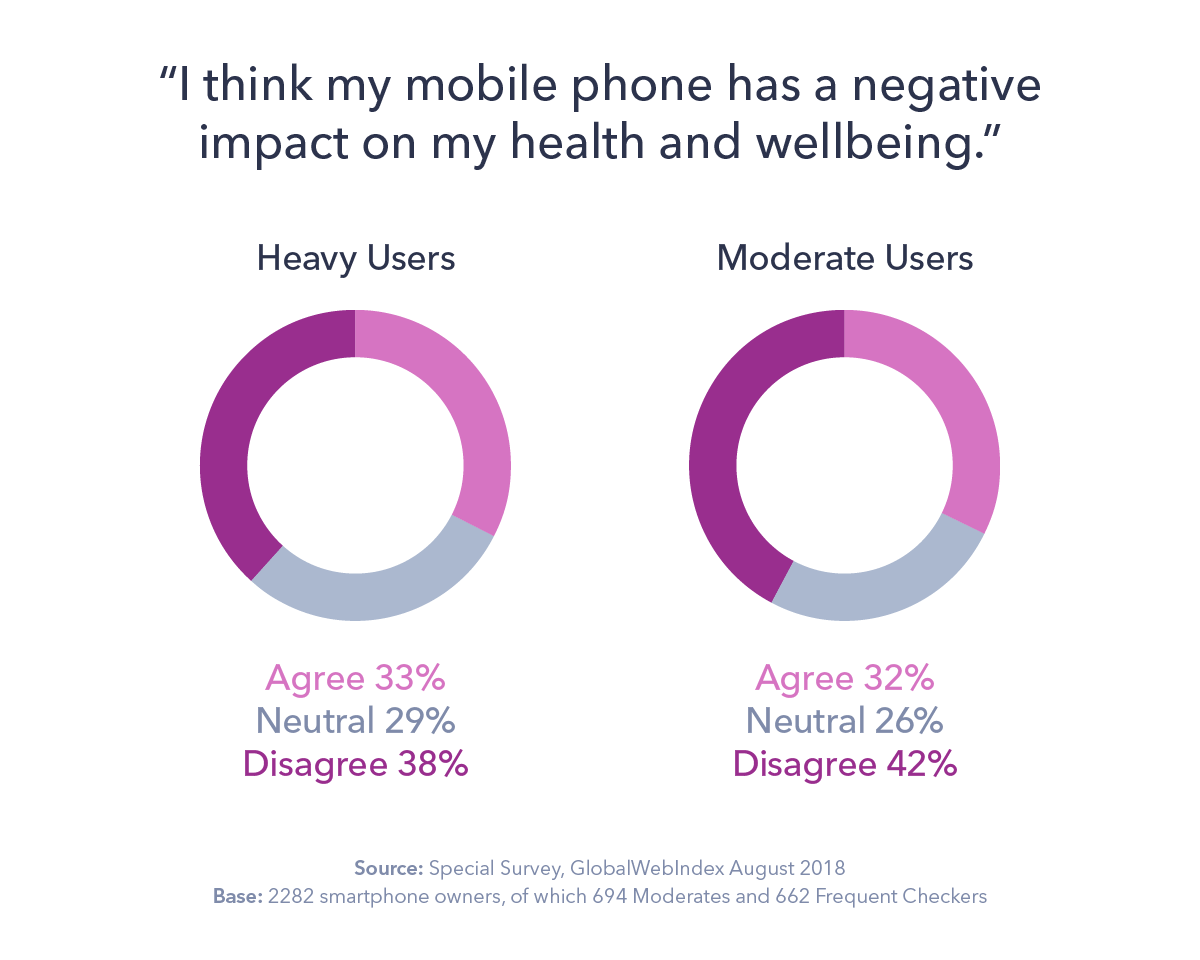 This holds true when we look at respondents with the highest reported usage: 14% of concerned users report checking their phones “more frequently than they can count”, but 16% of the less concerned group report the same. More concerned users aren’t putting down the phones either, so there’s more at play than frequency of usage alone.

There might be more to these concerns than just setting limits and balancing time. Users who fear negative impacts also report feeling much more insecure without their phones than they do without their wallets. 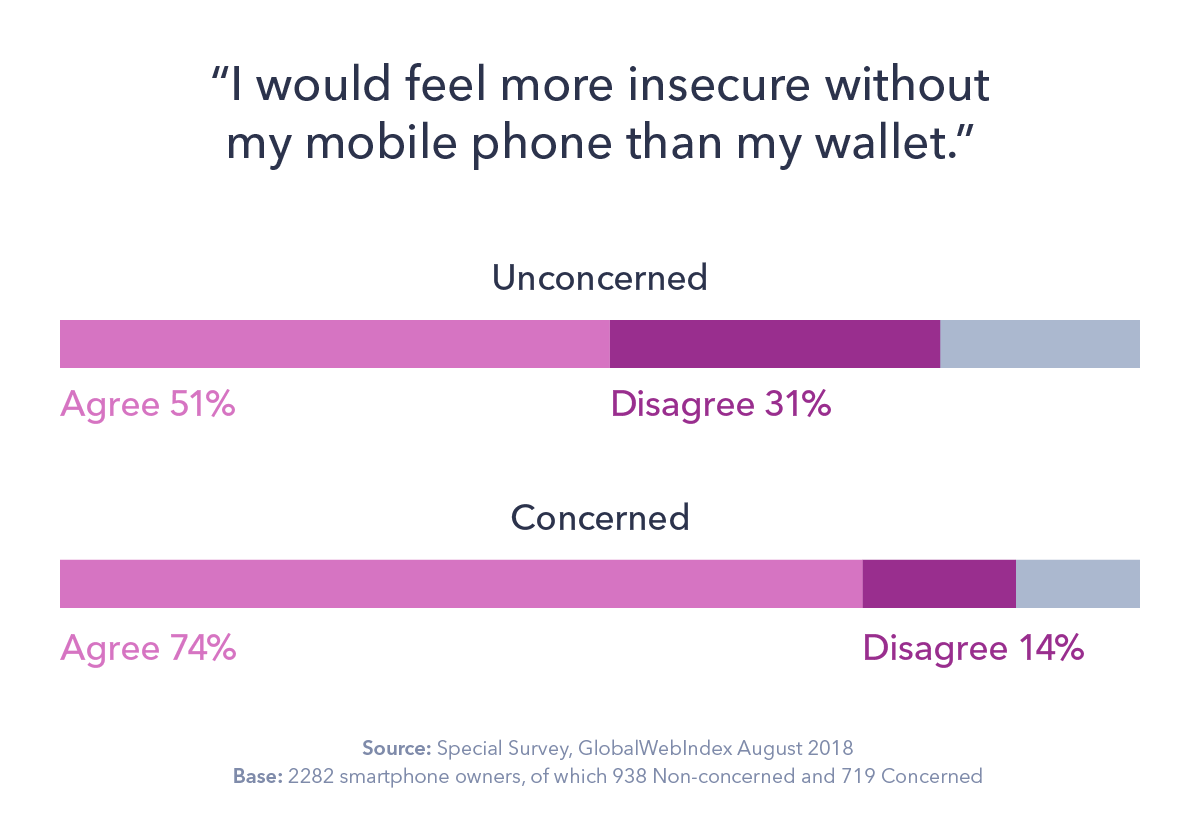 On the other hand, we see no obvious difference between content and concerned users when it comes to the share of people who feel anxious or worried if they forget their phones. Whether they feel comfortable coping without a phone for a day or not, 8 out of 10 would worry about leaving their phones behind if going out. 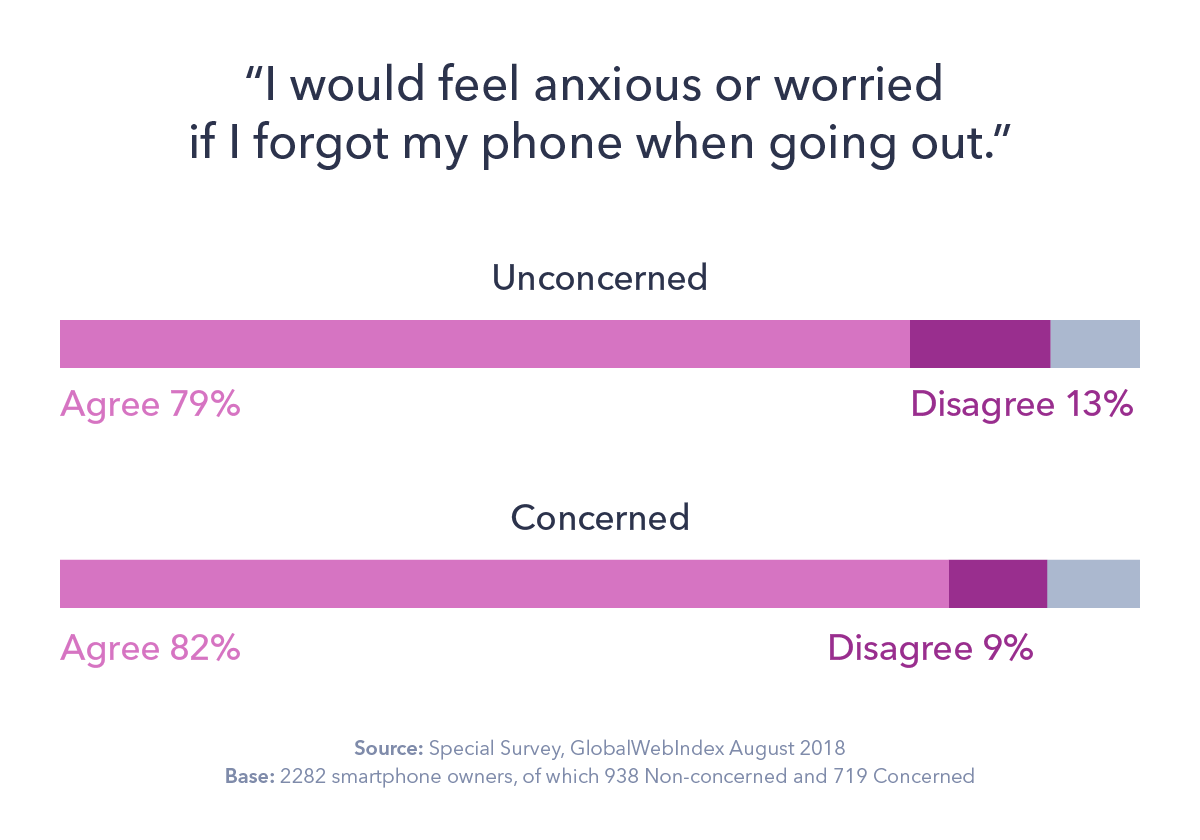 It’s down to how, not how much, you use your phone 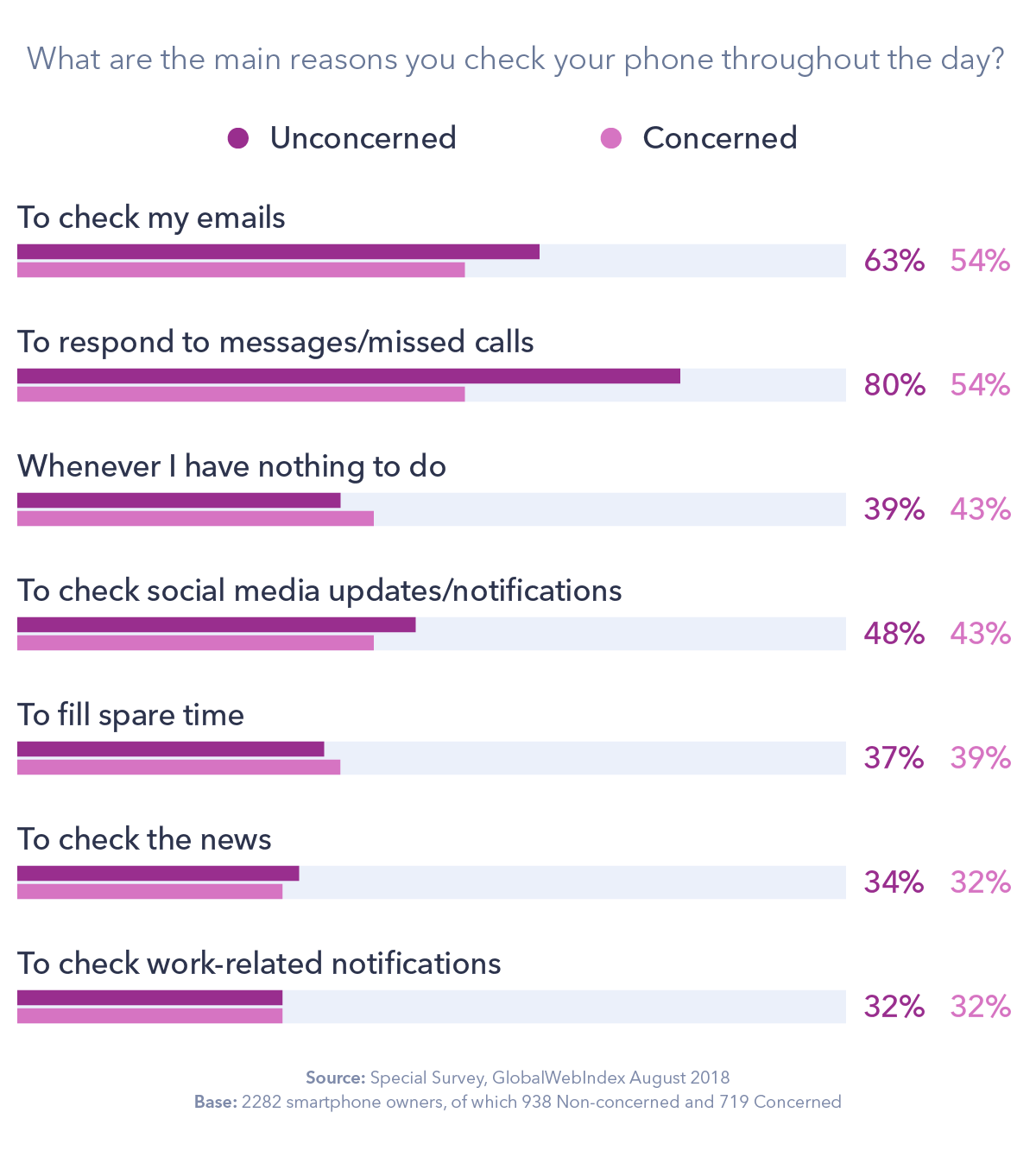 A comfortable majority of people who don’t feel negatively impacted by their mobile phones do check them regularly throughout the day, with only a slight majority managing to leave them be during working hours. 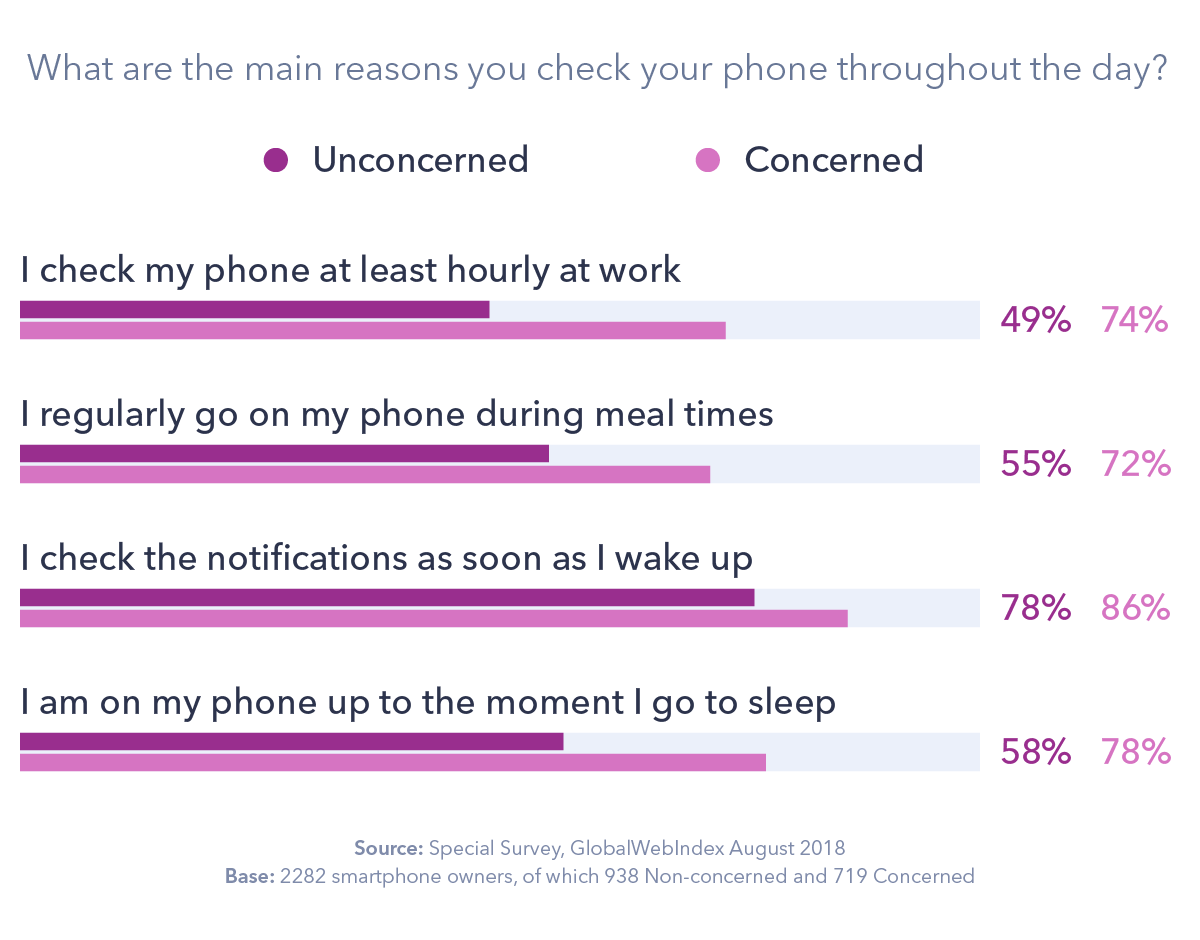 Based on this research, staring at your phone all day does not seem to be the hallmark of an addict, but concerned users are also more likely to be on their phones before bed, and they show less restraint during social times and working hours. The real difference, if anything, seems to be about reliance on the phone and on the ability to dial it down when needed.

Brands can design for user-experience beyond the here-and-now

As a snapshot of a moment in time, this survey alone can’t tell us whether we’re witnessing a rising or falling trend in phone fatigue and concern.

What it does tell us is how people use their phones could be more important than how much they use them.

In a related study, 24% of U.S. and UK respondents said they’d taken action, like uninstalling apps or unsubscribing from services, to moderate their phone usage for health and wellbeing reasons.

If this continues, brands and app designers may need to think beyond user friendliness in the moment of usage and consider the overall friendliness to their users’ lives.

This could impact hours spent in the here and now, but if it keeps a consumer from ditching the app or service, it may be worth it.