How to Score a Try with the Rugby World Cup Audience

Ahead of the 2019 Rugby World Cup (RWC) kicking off this September in Japan, we conducted a bespoke survey among 1,967 UK consumers to shed light on how Rugby fans plan on watching the tournament.

45% of all UK internet users will be watching or following the games, with 22% saying they’ll be watching most, if not all matches.

According to RWC 2019, more than 40% of the live attendance is expected to come from outside Japan, making the 2019 tournament host to the largest number of overseas visitors in the history of the Rugby World Cup.

As World Rugby Chair Bill Beaumont put it: “The incredible demand for tickets demonstrates that Asia’s first Rugby World Cup has truly captured the imagination of fans around the world.”

So, who are these fans, which teams do they support, and how can brands reach them?

What proportion of Rugby World Cup fans are female?

The country with the highest proportion of Rugby World Cup fans is South Africa (48%), followed by New Zealand (39%) and Ireland (34%).

But despite hosting the tournament, only 6% of Japanese internet users engage with it, which explains why overseas attendance is projected to be high.

Rugby World Cup fans are typically full-time working (64%) people in their mid-thirties, married (53%) and with children (59%).

Although it’s often assumed that rugby as a sport attracts a male-dominated audience, our data suggests a different story.

In fact, World Rugby is the first major sport federation to pledge an “ultimate state of equality” for every player, by removing references to gender in its men’s and women’s tournament names.

The competitions will now be referred to simply as “Rugby World Cups”, in an effort to reduce the perceived bias associated with men’s only tournaments, while simultaneously growing the profile of the women’s competitions.

This presents untapped opportunities for brands and sponsors to engage with the female rugby audience and make their stance on gender equality in sport clear.

Off the back of this, we’re already seeing some RWC sponsors rolling out purpose-led marketing campaigns.

For example, Guinness launched the latest addition to its Made of More campaign, “Liberty Fields”.

The TV ad and associated five-minute documentary portray the struggles of female Japanese rugby players who resisted the social conventions of 1980s Japan by forming the first female rugby squad.

The campaign’s success, as well as other gender equality-focused campaigns led by Guinness, such as its Six Nations storytelling ad “Sisters”, is evident.

Guinness has higher brand awareness as a RWC sponsor among female UK fans than its main competitor in the same space, Heineken.

Although Heineken has established higher brand awareness among male fans (50% say they know the company is an official partner of the RWC), Guinness tops the charts, together with RBS, among females (32%).

Will New Zealand be able to defend the title again?

Having won in 2011 and defended the title in 2015, New Zealand have dominated rugby over the last decade.

They became the first team in RWC history to win three times in total, as well as the first to successfully defend a title.

However, UK Rugby World Cup fans (those planning to watch most or all games) remain optimistic, and the majority of them still anticipate that England will knock off New Zealand from the top spot this year.

However, they don’t think this will be an easy feat.

As a surprise to many, one team that stands a good chance of winning the tournament according to predictions, is Ireland.

Although only 4% of UK RWC fans think the Irish will win, their victory against New Zealand at 2018 Autumn Internationals makes them a serious contender.

How can brands reach the Rugby World Cup audience?

The eight-hour time difference between the UK and Japan will undoubtedly affect the viewing habits of fans this season.

Many of the matches will be aired early in the morning, and our data shows 3 in every 10 RWC fans are already preparing to use ITV Hub to catch-up on the games as a result.

These unique viewing circumstances present huge opportunities for brands targeting rugby fans, who prove to be receptive toward ads on TV streaming services.

Our data shows that around 30% of UK fans also plan on following the action online or on social media.

Despite the inconvenient time, the vast majority (79%) still expect to watch the games live on TV.

This is great news for brands, as RWC fans globally are big second-screeners; 66% of them use social media while watching TV. They’re also 70% more likely than the average online adult to use social channels to watch or follow sports events.

When it comes to specific platform engagement, rugby fans are more active on social media than other internet users globally.

This audience is 93% more likely than the average Facebook user to have commented about a sports event they’d watched in the past month.

Being a part of the fan base by participating in discussions and posting exclusive content may be one way to raise awareness and grow a brand’s social media community.

With so many fans catching up on the tournament through a variety of channels, it’s clear the opportunity for marketers will be plentiful.

RWC fans worldwide are more likely to be affluent consumers, with almost a third falling in the top 25% income bracket.

As such, they expect a lot from brands – beyond the products and services already on offer.

A sense of community sits at the heart of what this audience cares about in terms of being part of and giving back to it.

Rugby World Cup fans are 34% more likely to buy a product simply for the experience of being a part of the community built around it.

They’re also an eco-conscious group. RWC fans are 40% more likely than average to want their favorite brands to use materials from local suppliers. What’s more, 68% say they would pay more for sustainable or eco-friendly products, jumping to 76% among 25-34-year-olds.

This is reflected in their relationships with brands too; a quarter of RWC fans globally want their favorite companies to produce eco-friendly products.

As a brand-conscious but community-driven audience, they are willing to spend money so long as the brand offer more than just flashy products – for example, a sense of community and inclusivity.

Companies targeting this audience need to ensure they build a community around their brand which involves Rugby World Cup fans every step of the way. 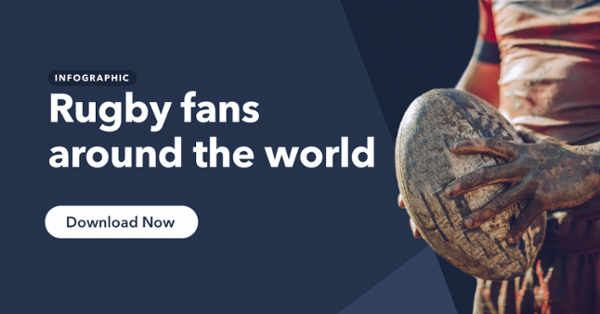